Fighting the war within

Show your support for ex-service personnel this Anzac Day. 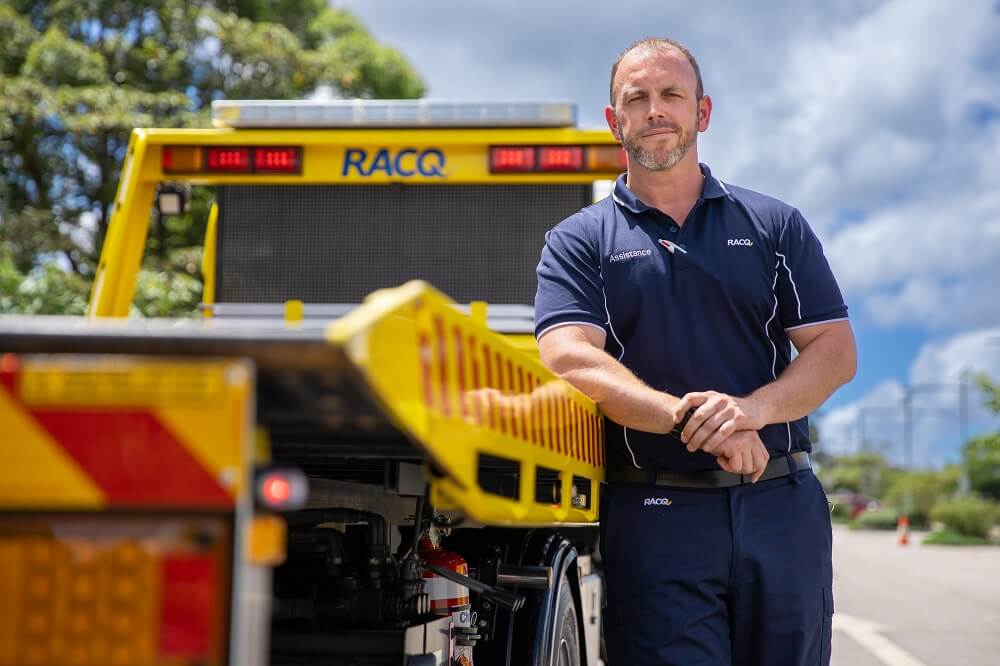 On Anzac Day, Kyle Ketchell will be one of thousands of former Australian Defence Force (ADF) personnel who pause to remember the courage and sacrifice of generations of ex-servicemen and women.

Kyle joined RACQ’s on-road team in 2020 after a 10-year career in the Royal Australian Air Force (RAAF) that included multiple deployments in the Middle East.

“I went into handling canines to detect human scent and explosives, developing canines for Army and Air Force capability and then training personnel for security operations,” Kyle said.

“I joined RACQ a month after I discharged from the ADF because I enjoy helping people and that’s something I can do in my role every day.”

National not-for-profit organisation Soldier On was established in 2012 to support returned ADF personnel who were physically or psychologically impacted by their service.

While Kyle was able to gain employment quickly, Soldier On CEO Ivan Slavich said many ex-service personnel found it difficult to transition to civilian life.

“When people leave the ADF, getting a job is an important part of therapy and reintegrating back into the community,” Mr Slavich said.

“They’re so focused on their military career and not really thinking about their CV and haven’t had a job interview for 10-15 years… so we work with TAFE Queensland, universities and RTOs (registered training organisations) to recognise prior learnings (from the ADF).”

Kyle said his military career had provided him with the skillset to excel in his career at RACQ.

“In my role you have to problem-solve quickly and come up with a very logical decision fast,” Kyle said.

“There can be times when we’re the first on scene at a fatal incident and, in these situations, having my background enables me to quickly risk-assess the environment to keep the scene safe.”

Mr Slavich said veterans of contemporary conflicts, like Kyle, often missed out on the support given to older veterans by other ex-service organisations.

“Our focus is on contemporary veterans, which includes people in their 20s to 50s,” he said.

“Even on Anzac Day I’ve seen young veterans feel like they can’t march even though they have the medals and have served.

“Anzac Day should be for anyone that’s a veteran, not just World War II, Vietnam or Korea, but contemporary veterans often feel like they’re not worthy.”

Kyle said Anzac Day could be difficult for some ex-service personnel.

“It can be a lonely time for some vets and it’s easy to become isolated,” he said.

“General members of the public just don’t understand how we think or get our sense of humour so sometimes we feel a bit misunderstood but on Anzac Day you can get together and have a chat with like-minded people who talk and think the same way you do.”

Mr Slavich said one of Soldier On’s key aims was to provide service personnel and their families with the opportunity to connect with others who understood the nature of their service.

“For social connections, it’s pretty much anything you can think of from surfing and kayaking to our Dungeons and Dragons group in Perth,” he said.

“There’s a certain language that people use when they’re in the ADF and they’re connecting with other people who speak the same language.”

Kyle said participating in Soldier On’s fundraising campaigns enabled him to support the mental health of fellow veterans. “Mental health is a big thing for me and trauma doesn’t discriminate, so fundraising is a way to provide support that will help ex-serving veterans,” he said.

“I generally don’t talk about my service but I’ll do it to help advocate and raise money for veterans’ mental health.”

Mr Slavich said reaching out for help was often one of the hardest steps.

“Once you reach out, we’ve got experienced trauma experts who can help you to access the kind of help you want and need,” he said.

“The experience is quite a caring, thoughtful and traumainformed approach, so I’d encourage veterans and their families, to reach out. It doesn’t hurt to ask for help.”

If you or someone you know needs crisis support, call Lifeline on 13 1114 (available 24/7).
ANZACHelping QueenslandCareers
Subscribe to our enewsletters