According to ancient history the Emperor Nero fiddled while Rome burned, and in a cruelly ironic twist Korean car maker Kia launched its all-new Niro electric vehicle in the same week it was dealing with a fire-related recall of its Sportage and Stinger models.

Recalls are not the ideal backdrop for the launch any new model, let alone one with a name that so closely resembles the ineffectual Roman emperor, but Kia can take heart from the fact it’s now aboard the galloping electric vehicle bandwagon with not one but three electrified compact SUVs.

Each of the Niro’s three powertrains – hybrid, plug-in hybrid (PHEV) and electric – will be available in two trims: S and Sport.

With such a line-up Kia has given itself every chance to get its EV journey off to a competitive start with the company claiming the Niro is Australia’s first SUV to offer a full suite of battery electric drivetrains – although in-house rival Hyundai does offer a similar range with the Ioniq sedan.
As always, the familial ties between the two Korean brands are never far from the surface with the Niro based on the Hyundai Kona, which has been available here as an EV since early 2019.

While acknowledging its EV shares mechanical underpinnings with the Kona, Kia says the Niro has more interior space in all dimensions, Kia’s own styling and typically generous fitout, and a choice of electrified drivetrain choices.

While this should give the Kia broader appeal than Hyundai’s singular EV approach with the Kona, the Niro is arriving here at an advanced stage of its model life, having been first unveiled at the 2016 Chicago Motor Show as a 2017 model.

In fact, its camouflaged replacement has already been sighted undergoing testing in Korea and Kia Australia executives confirmed the new model is probably only a year away. 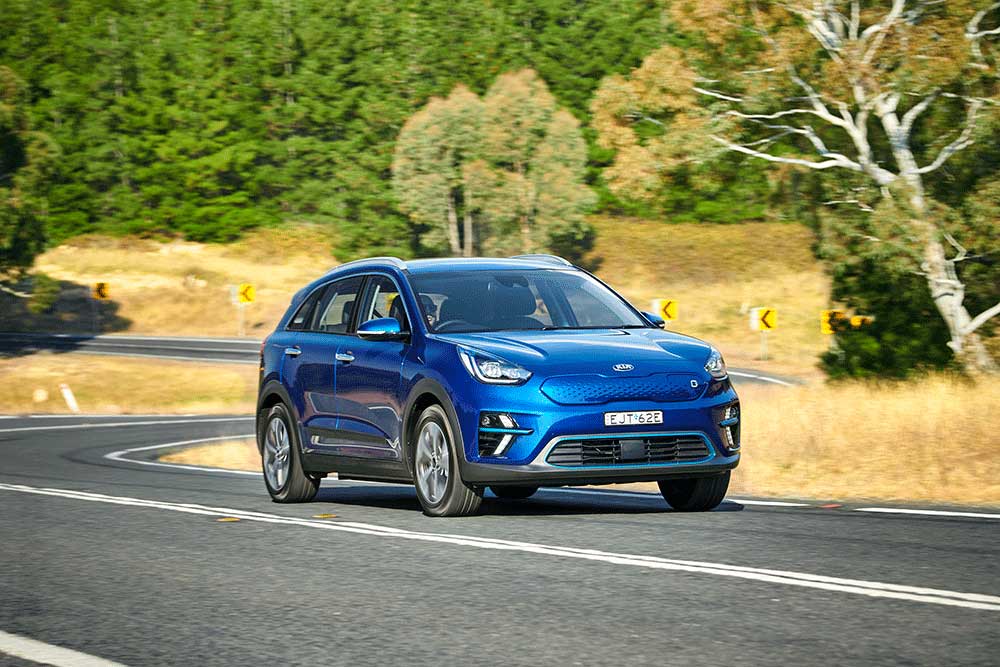 Kia has also recently unveiled its all-new dedicated EV6 model overseas, which is expected to be the company’s flagship EV when it arrives here in 2022.

Speaking at the launch of the new Niro, the company’s Chief Operating Officer Damien Meredith said Kia was nonetheless “thrilled to start its electric vehicle journey in Australia with the new Niro”, hinting that the company had plans for a much more comprehensive EV range in the future.

“The technically advanced and fun-to-drive Niro range demonstrates Kia’s research and development in this area is second to none and, along with the recent announcement of the exciting EV6, these products are just a hint of what else Kia will be offering when it comes to zero-emissions driving,” said Mr Meredith.

The electric motor is transmission mounted, sitting between the engine and the transmission to provide the most efficient and versatile use of the combined power of both engine and motor.

The arrangement allows for the full output of both the petrol engine and electric motor to be transferred in parallel through the transmission with minimal loss of energy.

This application also allows the electric motor to drive the front wheels independent of the engine.

Energy storage in the Hybrid model is managed by a 240-volt lithium-Ion polymer battery under the rear seat with a capacity of 6.5Ah and 1.56kWh.

The plug-in hybrid gets a pair of lithium-ion batteries with 360 volts combined and combined capacity of 24.7Ah and 8.9kWh. The HEV battery weighs 38.5kg and the larger PHEV battery 117kg. 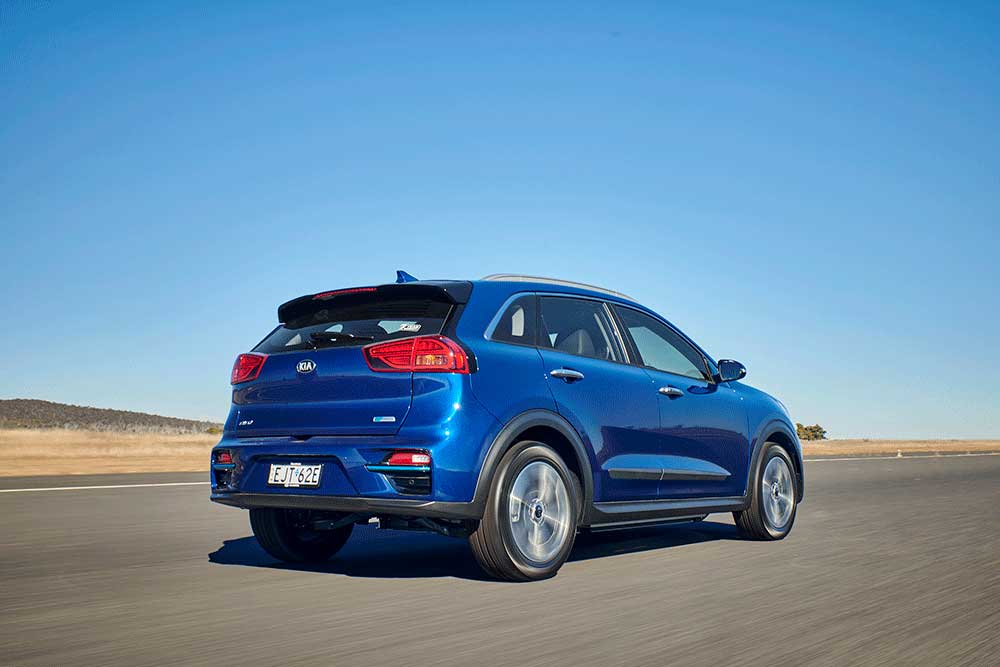 In both cases the Niro drives its front wheels through a six-speed DCT gearbox with the engine/motor workload share determined by driving conditions and the drive mode selections by the driver.

Kia claims the HEV will return fuel efficiency of 3.8L/100km in normal operations while the PHEV returns a combined efficiency of 1.3L/100km.

In normal operating conditions the hybrid system will use pure electric drive from launch and during gentle acceleration, such as in stop-start city traffic, while under full acceleration the engine works with the electric motor to provide optimum drive.

For PHEV models the driver can select one of three operating modes.

Automatic will select either pure electric or hybrid as the most appropriate setting according to driving conditions.

Selecting full EV mode will see full application of the battery power but with the ability of the petrol motor to kick in and assist when additional power is required. 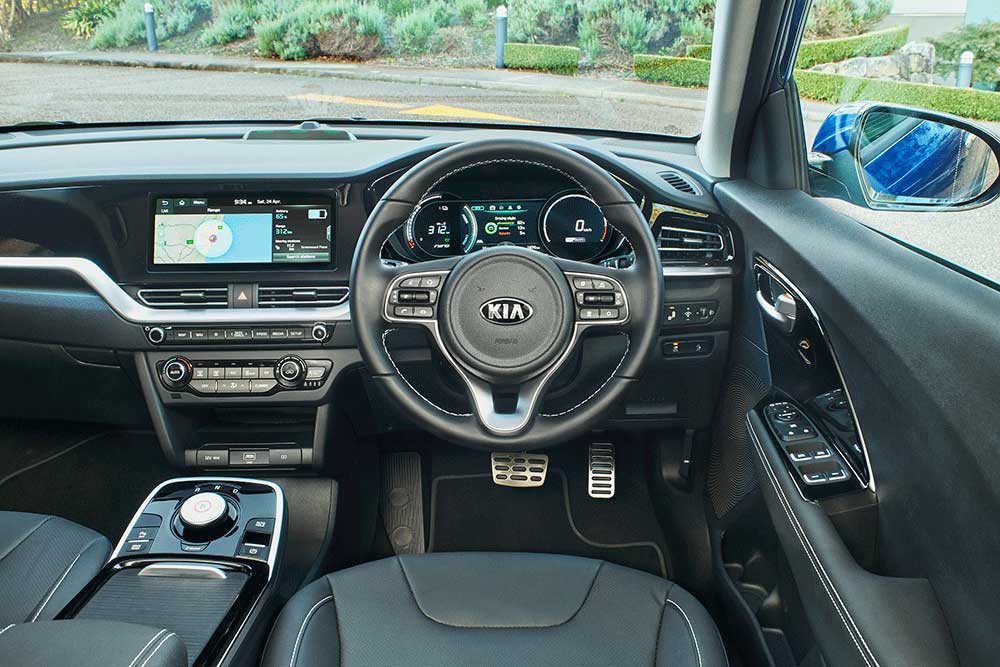 The Niro comes highly specified across all three drivetrains in both S and Sport models with the S models boasting 16-inch alloy wheels for hybrid and PHEV, roof rails, halogen headlights, LED daytime running lights, auto light control and solar glass for the windshield and doors.

A further interesting safety feature of the PHEV and EV models is a virtual engine sound system which, as the name suggests, generates an engine sound to alert pedestrians while the vehicle is moving at speeds less than 28km/h.

On the charging front, Kia has opted to not offer the complimentary public charging deals that some EV rivals bundle with the purchase price, instead pointing to the availability of a Kia Wallbox at a fitted cost of $2830 for those customers who require faster home charging than the standard 10-amp plug.

Otherwise, Kia has settled on the Type 2 (Mennekes) connection for AC charging of the PHEV and EV, and the CCS Type 2 Combo connector for DC charging on the pure electric vehicle. 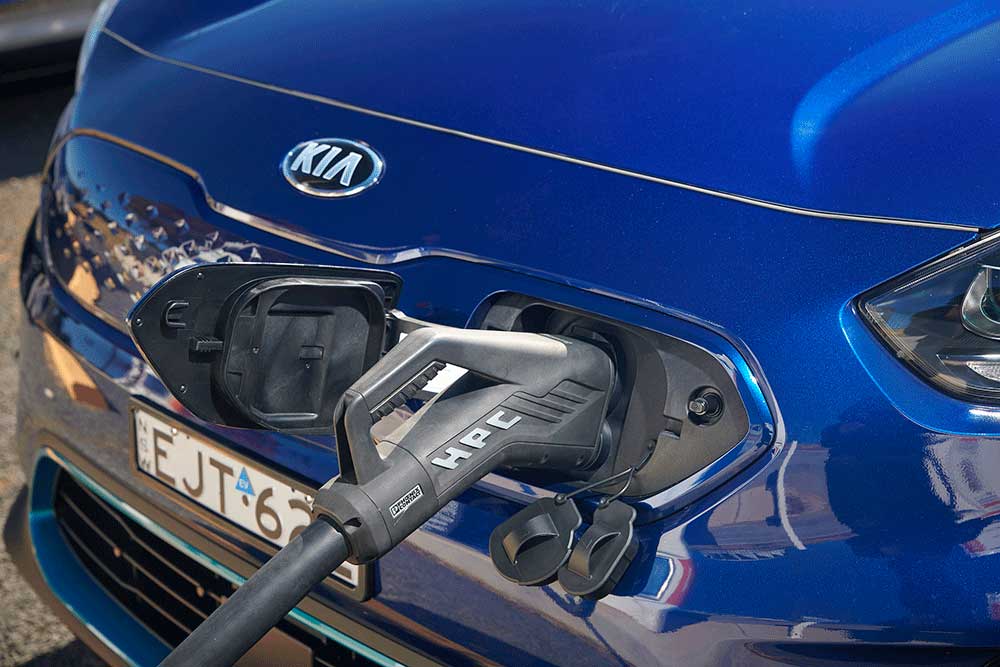 For the EV, an ICCB trickle charger will take 29 hours to fully charge the battery from empty, while using a 7.2kW AC charger will replenish an empty battery in nine hours and 35 minutes.

The charging status for PHEV and EV is communicated to the driver through the instrument cluster or via a three-light bar on the dashboard that is visible from the outside.

Interior dimensions of the new Niro are comparable with the Kia Seltos, with useable luggage space of 410 litres (hybrid), 324 litres (PHEV) and 451 litres (EV) with all seats deployed.

With rear seats folded that space increases to 1408 litres, 1322 litres and 1405 litres for Hybrid, PHEV and EV respectively.

Kia says all its Australian service centre will have staff trained in the management and service of electric vehicles and every dealership will have the ability to recharge customer vehicles, although a spokesperson said it would be up to individual dealers to decide if this service was complimentary or not.

The company’s seven-year unlimited-kilometre warranty, seven-year capped price servicing and seven-year roadside assist apply across the Niro range, except for the high-voltage battery and electric motor which are covered by a seven-tear 150,000km warranty.