Jessica Wilson18/08/2020
Out and About
Experience skydiving without jumping out of a plane. 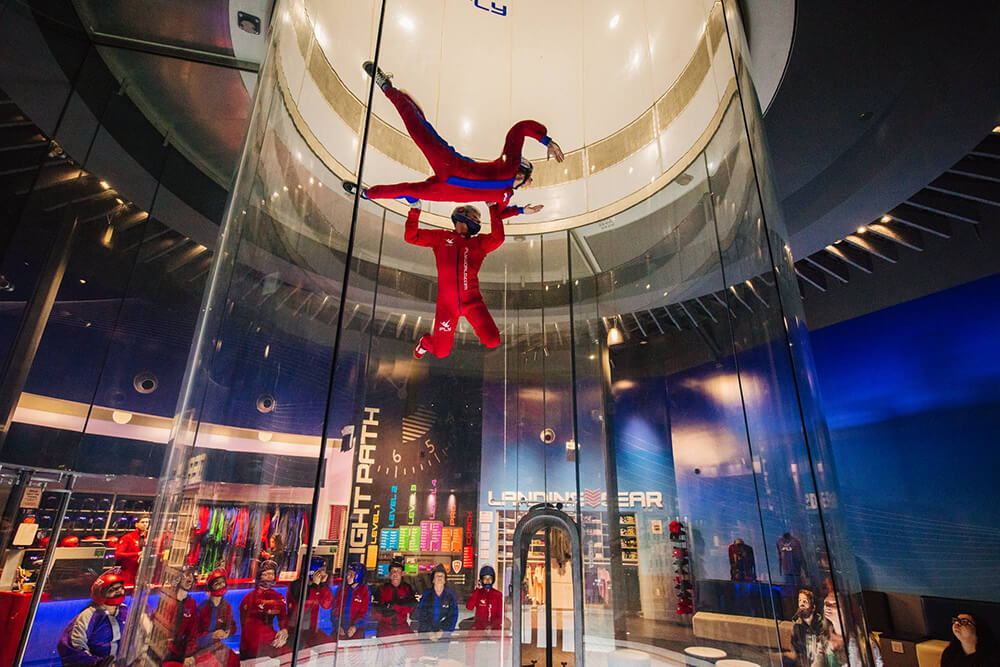 As someone with a fear of falling, I’ve never understood the appeal of skydiving. Why risk your life by jumping from a perfectly good plane? So I was suitably nervous when given the opportunity to try indoor skydiving at iFly Australia’s new location.

Arriving at iFly, I was mesmerised by an instructor performing flips and swan dives in the centre’s state-of-the-art vertical wind tunnel, which simulates the sensation of skydiving in true freefall conditions. The tunnel generates wind from above, channels it down the tunnel’s sides and pushes it though the floor of the enclosed flight chamber to create a stable cushion of air for ‘flyers’ to float on.

When it was time for our flight, our certified skydive instructor provided a run down on safety, how the wind tunnel worked and we practiced holding our legs, arms and head in the correct position. Then it was time to suit up and take flight.

Standing in the doorway to the tunnel, about to fall forward on to a column of wind raging at almost 150km/h was daunting but the instructor, who had more than 450 skydives under his belt, was great at putting first-time flyers at ease. As I bellyflopped into the tunnel the instructor grabbed the handles on my flight suit to help me get in the optimal flying position and within seconds I was flying on my own.

The 60 second flight, twice as long as the freefall portion of many conventional skydives, was exhilarating and I couldn’t wait for my second flight during which the instructor took hold of my arm and leg to whizz up and down the tunnel.

Once I was in the tunnel, all nervousness and apprehension faded away and I couldn’t wipe the grin off my face, drool and all. The feeling of the wind buffeting my body as I soared above the crowd below is hard to describe, but it’s something everyone should experience.

I don’t think I’ll ever jump from a plane, but I’m definitely heading back to iFly for round two.