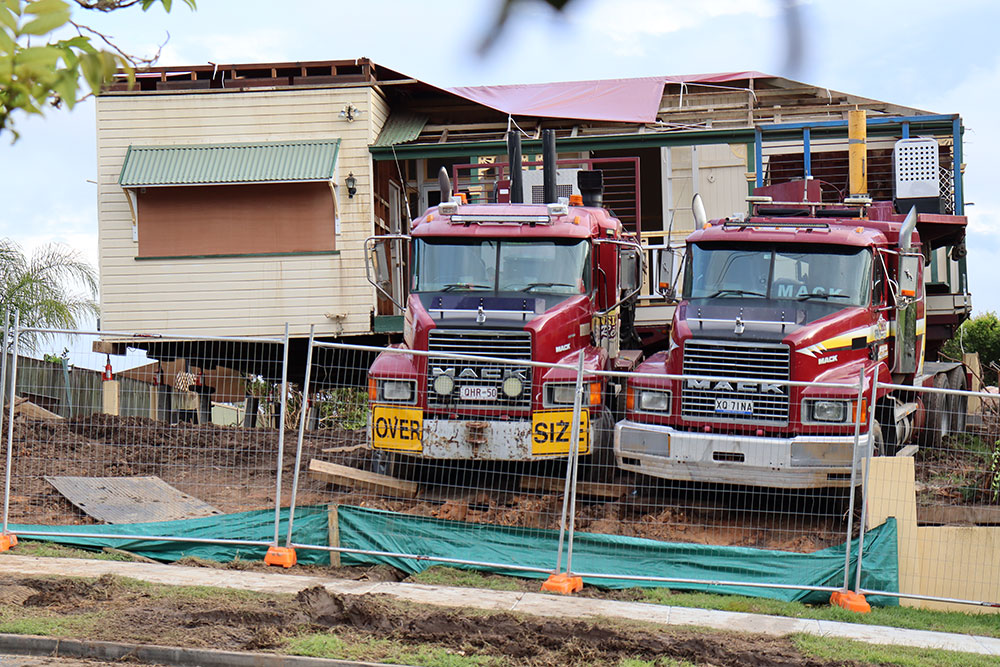 “I have never been as busy as I am at the moment,” Mr Wright said.

“We’ve doubled our turnover in the last 18 months.”

Mr Wright is moving about three homes a week and could easily do more.

“The biggest problem I have is getting guys to work,” he said. “If I could get more guys, I could move more houses.”

The Wright family has been in the house removal business for three generations.

There are 11 family members employed by the business, including John and his co-owner wife Katrina, three children, a daughter-in-law, a niece, John’s two brothers and his two parents, who lend a hand on weekends.

“You’ve got to be born into this to do it – it’s not for everyone,” John said.

He works about a 1,000km radius from the business’s Caboolture base, however he will go anywhere “by special appointment”. Late last year, he moved two homes to Melbourne and shifted a magnificent Queenslander from Mackay to the Sunshine Coast early this year.

He said out of every 10 houses he inspected, only about three were deemed worthy of removal. 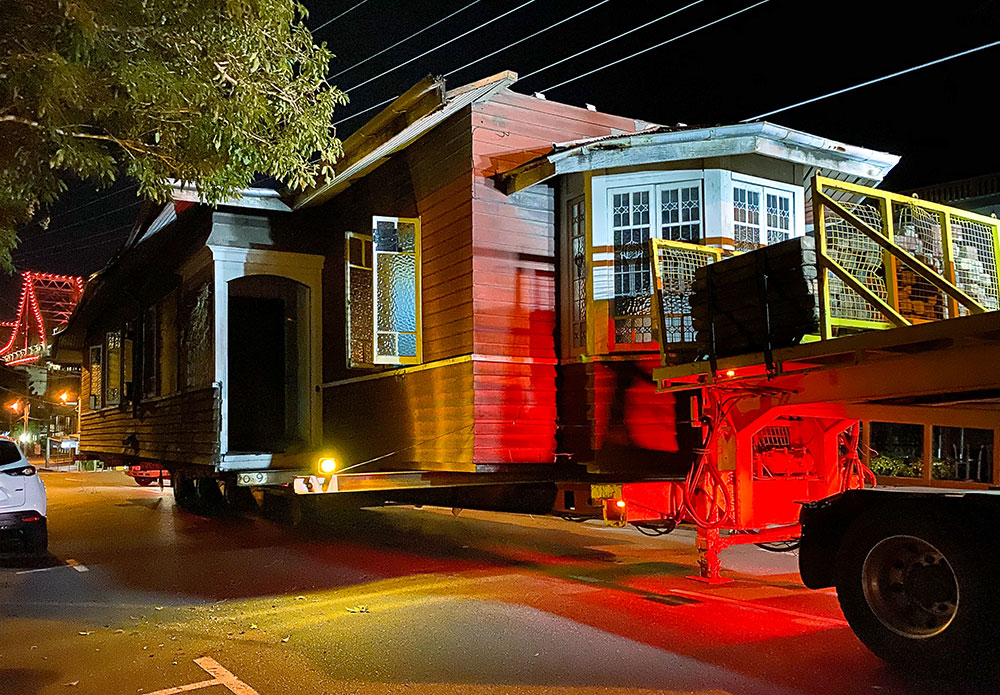 The  home of David Bland and Julie Jackson on its way from Kangaroo Point to Boonah.

“Not all houses get moved, which is a pity because they might be a really good house, but the costs might outweigh the benefits,” John said.

“In that case I advise clients it’s probably going to be more of a demolition prospect than a removal.”

Sometimes the client will pay to have the house removed, but mostly John buys the houses and gives himself a three to six-month window to on-sell them.

Once John finds a buyer for the house, contracts are drawn up and the move’s logistics are organised, including about 10 different permits and approvals.

Then the home is cut into sections, usually up to 9m wide, dropped onto the back of special hydraulic trailers and hauled by truck to the new site under a police escort.

“Ninety percent of the homes we move we buy from people that are building their dream home on their site and we come in and take the old one away,” he said.

Demand for removed homes has undergone a spike as people look for cheaper alternatives to building a new home.

“If you’ve got a block of land somewhere, it’s an alternative to building new,” John said. 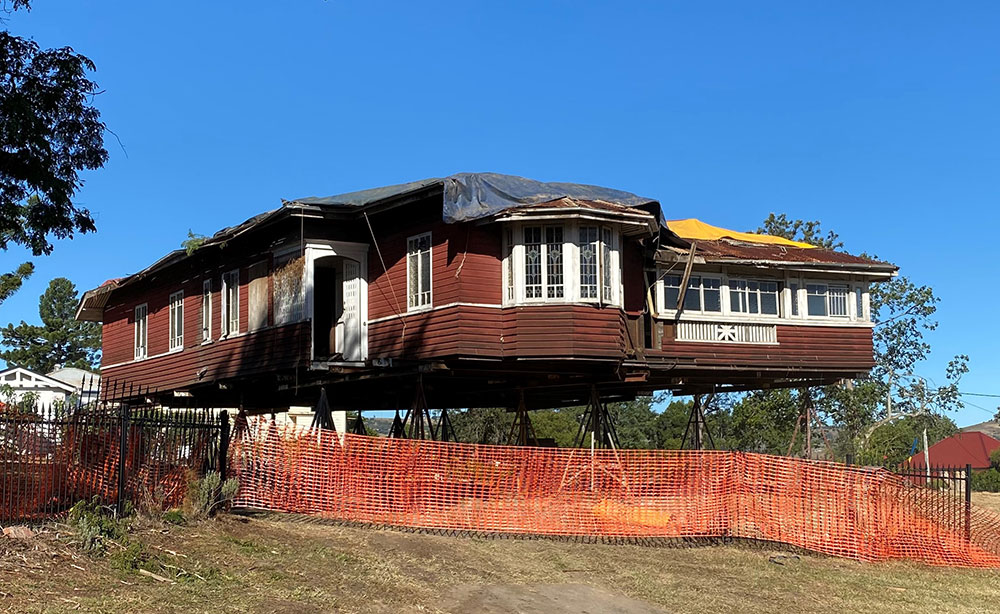 The Kangaroo Point home after arriving in Boonah.

“I believe a good second-hand home can be about half the price of building new at the moment.

“I am a licensed builder and I can say building costs have just about doubled in the last 18 months.”

John said his other customer base was people who loved older Queenslander-style homes.

“People buy some houses to be economical, but other people buy them for their heritage,” he said.

That group includes Boonah couple David Bland and Julie Jackson, who spent 18 months searching for a property to replace their 100-year-old home that was destroyed by fire four years ago.

In July 2019 they inspected a run-down home opposite the Story Bridge Hotel on Main St, Kangaroo Point, and immediately fell in love with it.

“In that year and a half, only one or two houses came up with what we call the wow factor,” David said.

“As soon as we saw this one, we walked through it, went outside and signed the contract.”

The RACQ members said they wanted a traditional, historic Queenslander to replace the home that attracted them to move from Brisbane to Boonah, 90km to the south-west, with their two children 18 years ago. 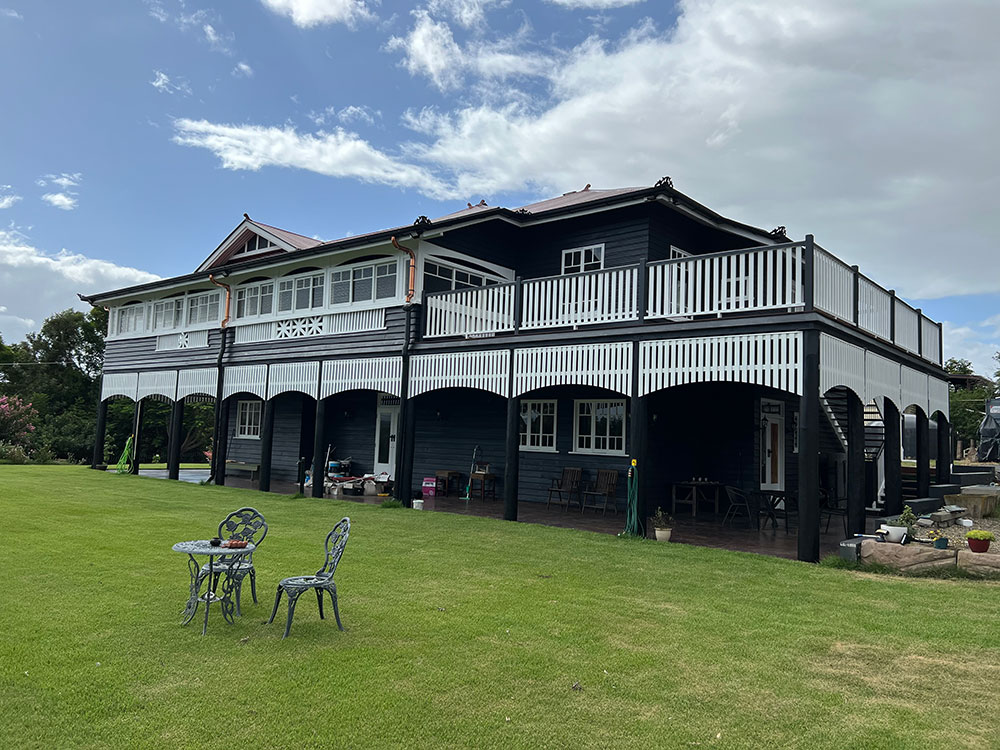 “We wanted to replicate what we had, so we knew that the best option was to go to something original and a hundred years old,” Julie said.

“Building new was never an option because we knew it wouldn’t be authentic.

“It’s the best thing to do because these houses have been around for a hundred years, so you know they are going to last another hundred easily, with some love and care.”

David and Julie paid Queensland House Removers $200,000 for the three-bedroom home, including delivery to Boonah, restumping and reroofing.

They have spent the past two years finishing the renovation, which has seen the house raised, built-in underneath and a deck added on the top floor.

The living area of the house, including the deck, is 540sq.m, and it now makes a bold statement on David and Julie’s 3000sq.m block in Boonah.

“We’re really excited because it has been a long project and it is looking really grand and we are really pleased to be home,” David said.

“We had such a sad loss with the beautiful old home that was here going completely, but a bit more than four years later, we are finally back.

“And it’s a nice feeling knowing that you are saving a house, instead of it being demolished.”