Wisely, Porsche largely retained the design of the concept. There aren’t too many vehicles that have this sort of road presence.

The Taycan attracts attention everywhere, with dozens of people craning their heads for a look during our launch drive.

But there’s more to the Taycan than its striking styling, with Porsche promising its first EV drives like any other Porsche sportscar, including the iconic 911.

This eye-watering pricing places the Taycan in the same bracket as its luxury Panamera stablemate, the Mercedes-AMG GT four-door and other exotics.

It’s worth remembering, too, that the original high-performance EV sedan, the Tesla Model S, starts from around $134,000, which in this context now seems a relative bargain.

Higher grades naturally gain a lot more standard gear and there are a bunch of options packages for lighting, interior trim and more. 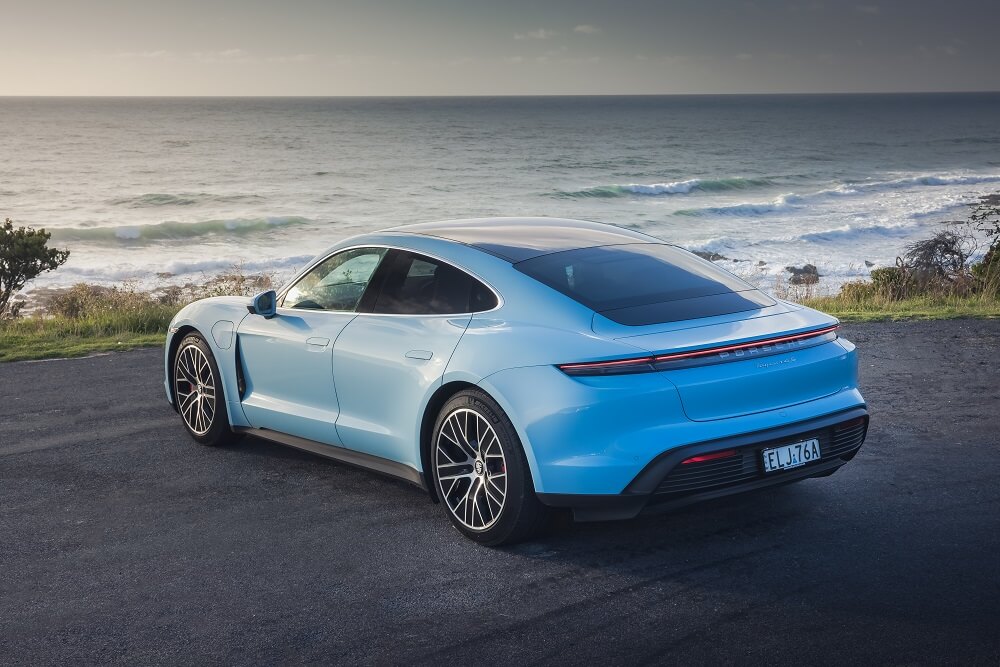 Safety-wise, the Taycan is yet to be crash-tested by ANCAP.

It has, however, received a five-star rating from Euro NCAP with standard safety gear including a suite of airbags including side airbags in the rear, adaptive cruise control, lane change assist, lane keeping assist, autonomous emergency braking with cyclist and pedestrian detection and an active bonnet.

Inside, the Taycan has a similar vibe to other current model Porsches, notably, the Panamera four-door coupe.

Most of the vehicle functions are housed in one of three touchscreens – two in the centre stack and the 16.8-inch curved instrument display which has touch functions for the chassis and drive modes.

An optional touchscreen for the front passenger integrates into the main 10.9-inch central screen.

The entire multimedia setup is impressive and will likely appeal to tech heads, but sometimes it feels like overkill.

For example, you can’t adjust the air vents manually. You need to go into a menu on the central screen and use your finger to touch the display to change the direction of air flow. It’s a bit unnecessary.

In all variants the well-bolstered seats and trim feel high-quality.

There is a leather-free trim option for those looking to be more sustainable.

Rear seat space is tight and can’t match the leg room of the Panamera. It’s best suited to children or short trips for adults.

Rear visibility is hampered by the tiny rear windscreen, so drivers will need to rely on the parking cameras and aids.

Under the bonnet there’s no motor but an 84-litre cargo space, which complements the Taycan’s 366-litre boot. A pair of electric motors on each axle power the Porsche, effectively making it all-wheel drive.

The result is 0-100km/h in four seconds, which is slightly quicker than a standard 911 Carrera.

As always, Porsche offers a go-fast option in the form of the Performance Battery Plus, which for a cool $11,590 bumps up power and torque to a more muscular 360kW/650Nm.

If that still hasn’t satisfied your need for speed, the Taycan Turbo S boasts outputs of 560kW/1050Nm using the same battery capacity as the Turbo to deliver a blistering 2.8-second 0-100km/h time.

For anyone scratching their heads and wondering how an EV turbo works, don’t trouble yourself, as there’s no such thing.

Porsche has simply retained internal combustion nomenclature to ensure its EV matches naming protocols used on the rest of its model range.

The chassis is made up of aluminium double wishbone front and multilink rear suspension, with Porsche 4D Chassis Control that uses electromechanical anti-roll bars to prevent body roll, and Porsche Active Suspension Management with Range, Normal, Sport and Sport Plus modes.

The driving range of the 4S is 365km (increasing to 414km with the Performance Battery Plus) and it consumes 262Wh/km of energy.

The Turbo’s range is 420km and energy consumption is 280Wh/km, while the Turbo S can drive for 405km before requiring a charge and consumes 285Wh/km of energy.

Charging the Taycan from zero to 100% capacity using an 11kW home charging box takes eight hours for the 4S and nine hours for the Turbo and Turbo S. Porsche has softened the pain of EV charging inconvenience somewhat by including in the Taycan’s purchase price a free home charging box and a three-year subscription to the Chargefox Ultra-Rapid public charging network.

The acceleration of the flagship Turbo S is phenomenal.

The rocket-like performance forces you back into the driver’s seat – it’s almost shocking at first and reminiscent of the acceleration of a Tesla with Ludicrous mode.

The 4S isn’t as quick in a straight line as the Turbo S, but the performance is still breathtaking.

Each of the Taycan variants exhibits impressive cornering ability, carving through twisty roads with the ease of a much smaller car.

The biggest surprise is the ride quality. While the suspension is tuned on the firmer side for better handling, it somehow maintains a comfortable ride. The adaptive air suspension helps here.

It’s clear from our brief stint driving all three variants that the Taycan is a true Porsche.

The electric powertrain changes things up, but that Porsche essence remains.

The car’s performance is extraordinary and it’s a technological powerhouse.

The 4S with the Performance Battery Plus is the pick.