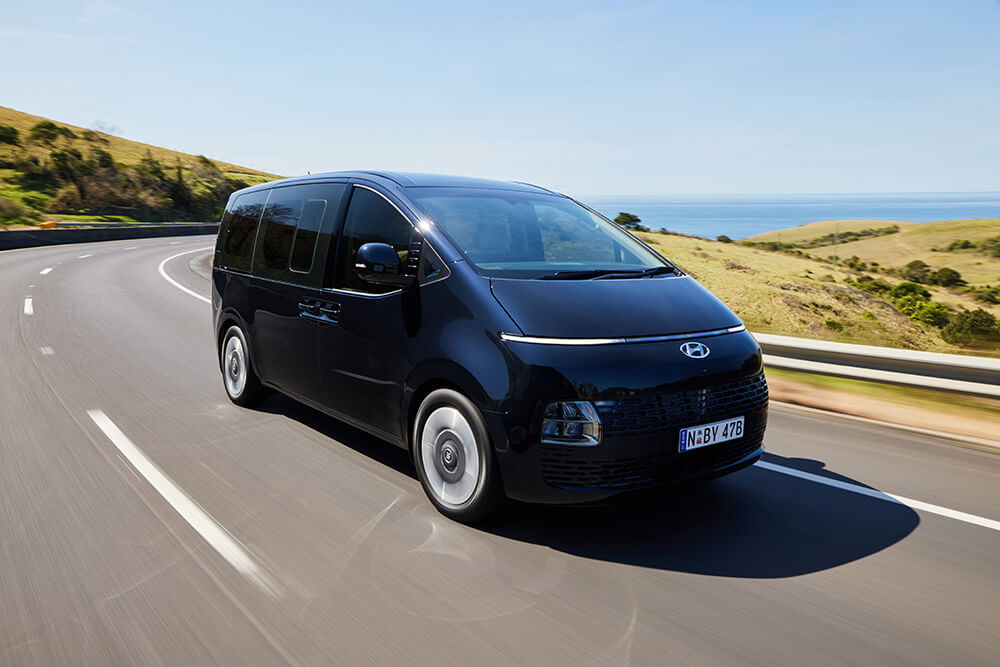 The new people mover’s looks are unlike just about anything else you’ll see on the road, but it’s the inside story that makes the Staria worthy of consideration by large families.

The new model shares its underpinnings with Hyundai’s popular Santa Fe SUV, but sits on a significantly longer wheelbase and boasts seating for eight instead of seven.

The Tardis-like spaceship truly delivers on its roomy people moving promise, which is something many seven-seat SUVs fail to do adequately.

Available in three model grades with a choice of V6 petrol or four-cylinder turbodiesel engines, the Staria is equipped with an eight-speed auto across the range.

If diesel is more to your liking, then simply add an extra $3,000 on top of each of the prices listed to get yourself into the equivalent specification Staria powered by a proven 2.2-litre turbodiesel, mated exclusively to Hyundai’s HTRAC all-wheel-drive system.

The availability of AWD is a rarity in the dedicated people mover class, with only VW’s Multivan range offering this feature. However, the Staria holds the significant trump card of being priced some $20k less than its German rival, while still delivering a host of standard features.

The AWD system as tested here gives Staria a handy level of all-road ability, too, but stops short of turning it into an off roader. 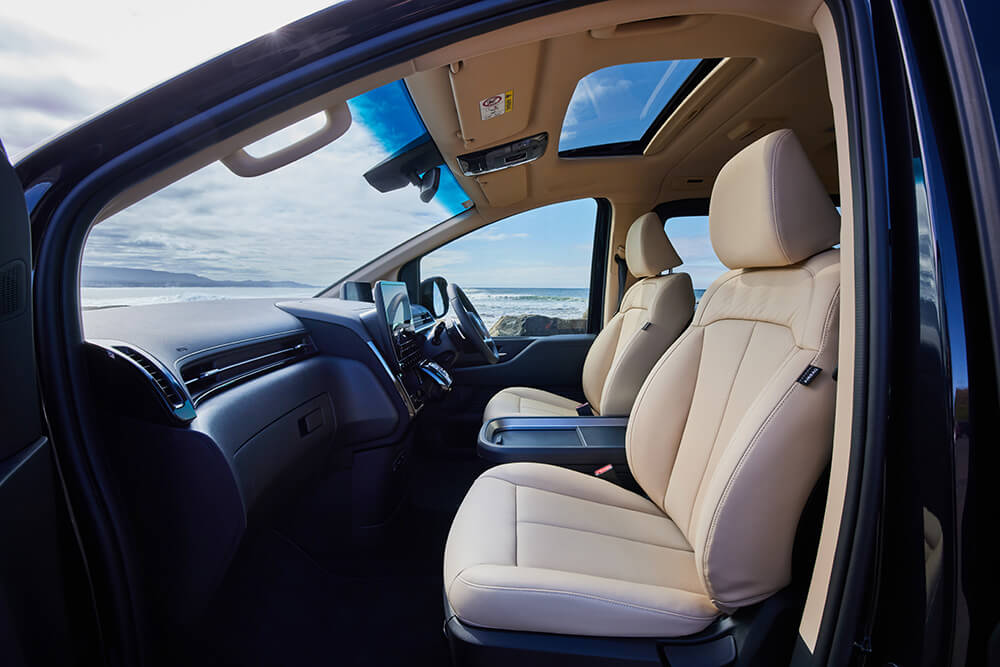 The system features an electronic variable-torque-split clutch with active torque control between the front and rear axles. Based on inputs from various sensors, it can selectively brake or vary torque across each axle for optimum traction.

A dash-mounted 4WD lock button also enables the driver to lock the torque split 50:50 to the front and rear axles for low traction conditions.

The Korean car maker has gone big on standard technology and advanced safety features, putting Staria well ahead of its iMax predecessor. A standard centre front airbag is hailed as one of several ‘segment firsts’, bringing the total airbag count to seven, and there’s a suite of SmartSense active safety and driver assistance technologies on all variants.

On top of this, Elite and Highlander models add a more sophisticated 3D surround-view monitor system and safe-exit assist, while the Highlander also gets a blind-spot view monitor.

We regard Safe-exit assist an excellent feature in this style of vehicle as it adds an extra layer of safety for children and other occupants.

The system provides a warning of traffic approaching from the rear when a door is opened (like the safe exit warning on lower spec models), but can also temporarily prevent the rear power doors from opening if it is unsafe to exit.

The surround view camera system combined with front and rear park distance sensors makes parking what is a large vehicle with extremities that could otherwise be hard to judge, a relatively simple affair.

Highlander’s blind-spot monitor uses cameras mounted in the exterior mirrors and projects an image of the left or right blind-spot into its 10.25-inch LCD dash cluster, according to which turn indicator is activated. The improved field of view compared to mirrors alone makes for safer lane changes. 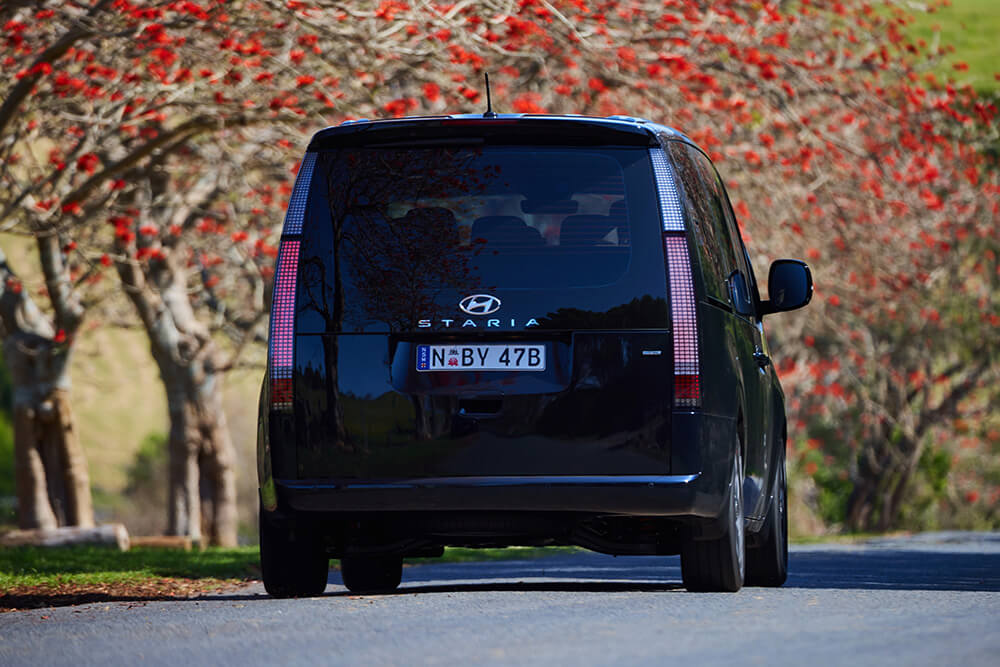 Reach for the top shelf and the ‘extras’ over and above the Staria Elite include dual power sunroofs, heated/ventilated front seats, heated steering wheel, LED interior and map lights, cloth headlining, two additional dash storage boxes, a choice of blue or beige interior, and a rear passenger view monitor.

The latter uses a roof mounted wide-angle high-definition camera to present a video image of second and third row seating and occupants, which is handy for keeping a watchful eye on the kids. It even works in the dark, thanks to night-vision functionality.

Another range-wide feature that’s likely to be appreciated by families is Quite mode, which mutes the rear speakers in case the kids are sleeping, while still allowing front passengers to enjoy their audio at a lower level.

Other practical touches include more cup holders than you can shake a Slurpee at, grab handles in all rows, and plenty of oddment stowage, including a large front console box with sliding lid that doubles as a tray table when closed.

The load area floor height is also set low enough for easy cargo loading and is a comfortable height to sit and watch the kids sport beneath the cover of the open tailgate.

One small gripe is the absence of a grab handle to assist the driver on entry and exit, something shorter drivers may find disappointing.

On the plus side, it’s great to see Staria supplied with a matching full-size alloy spare wheel and tyre, where impractical space saver spare wheels are increasingly the norm. Occupants are well catered for with comfortable seating throughout. The third row isn’t quite as good as the first and second, but is still better than many of the third-row pews we’ve sampled.

Importantly, there’s still plenty of room for luggage and other gear even with the rearmost pews in use, which is something many SUVs and even some people movers can’t claim. Passengers will also appreciate the climate control roof vents in both rear rows, and the rear fan/temp controls in the middle row.

Both rear rows offer fore and aft sliding seat adjustment, with the second row featuring a 70/30 split fold, while the third-row cushions flip up vertically for extra load space.

Unfortunately, row three doesn’t fold away when not in use and neither rear row is designed to be easily removable when transporting larger loads. Hyundai claims official cargo volumes is a cavernous 831 litres behind the third row and 1303 litres (both VDA) with second and third rows forward.

Child restraints are regrettably limited to the middle row’s three anchor points (there’s none in the stern), with the two outer positions ISOFIX compatible.

The Staria cabin has a modern, stylish, and well finished look, but use of practical but hard looking plastics around the dash and door trims lets the overall effect down a little.

Our test car’s beige leather trim looked fresh and upmarket, but had some minor soiling already evident, suggesting it might be challenging to keep it that way.

A low belt line and wide expanse of glass adds to the sense of spaciousness in the cabin, but the large, triangulated base of the A pillars can block the driver’s vision at times.

The test vehicle came fitted with the turbo-diesel engine rather than the 200kW/331Nm V6 petrol. Both engines are familiar from other Hyundai and Kia offerings, with the V6 offering stronger performance but higher 10.5L/100km fuel consumption, versus the oiler’s 8.2L/100km.

The diesel musters maximum outputs of 130kW and 430Nm and after a touch of initial lag it gets on with the business of getting the Staria’s 2300kg kerb mass up to speed.

There’s adequate urge, but you wouldn’t say it feels quick, even with just a driver and passenger aboard.

Asking it to hurry also elicits a rather rowdy response, but at least the auto is smooth and there’s paddle shifters should the driver want to change gears manually.

We didn’t expect anything especially sporty from Staria in the handling department, and that’s how it panned out. It’s competent and secure enough for its primary function, with light and slow geared steering making it easy and safe to drive.

The level of body roll through twists and turns is magnified by the tall body and high driver’s seating position, though.

In summary, the Staria might not quite match many of its seven-seat SUV competitors for driving dynamics, but it’s clearly a safer, more sophisticated and more car-like offering than its predecessor.

Where it stands head and shoulders above most SUVs is in fulfilling its design brief of being a generously proportioned and practical people mover.

And, with its head-turning looks, this is one family bus that proves form and function can happily co-exist.