Kia serves up an EV for the people

Kia’s new EV6 large SUV will be available through every Kia dealer, but only if you’re quick. In what might be interpreted as a thinly veiled swipe at its in-house rival, the Hyundai Ioniq 5, Kia Australia CEO Damien Meredith said the company’s new EV6 large SUV would be made available to every Kia dealer in the company’s Australian network.

The new electric SUV is Kia’s first model based on the so-called Electric-Global Modular Platform or E-GMP, a dedicated EV platform that it shares with the Hyundai Ioniq 5.

But where the latter is being sold exclusively through a new factory-direct sales model, Kia will instead distribute and sell the EV6 through its existing dealer network with every dealer promised at least one vehicle from the initial allocation, Mr Meredith said.

Kia is banking on this approach, as well as the impressive range, styling, and features of the EV6, to counter the appeal of the Hyundai Ioniq 5 and the yet-to-be-launched Tesla Model Y, both of which it was benchmarked against during development.

Looking completely different to the Ioniq 5’s somewhat ambiguous styling, the EV6’s distinct SUV styling should broaden its appeal with families, although it still only seats five passengers, despite boasting a particularly long wheelbase and roomy interior.

Mr Meredith said he was confident the brand would easily shift its first-year allocation of 500 EV6’s and would be hoping to secure an additional 100 or so units from its Korean parent company, if possible.

Even that is unlikely to satisfy demand, however, with the EV6 seemingly facing the same supply challenges constraining Hyundai’s Ioniq 5.

Kia also claims to have had a record level of enquiries on the EV6, with volumes three times greater than the Stinger sports sedan, the brand’s most enquired about model up to this point.

“Local interest in the EV6 has been extraordinary and we are really pleased it is finally here,” Mr Meredith said. 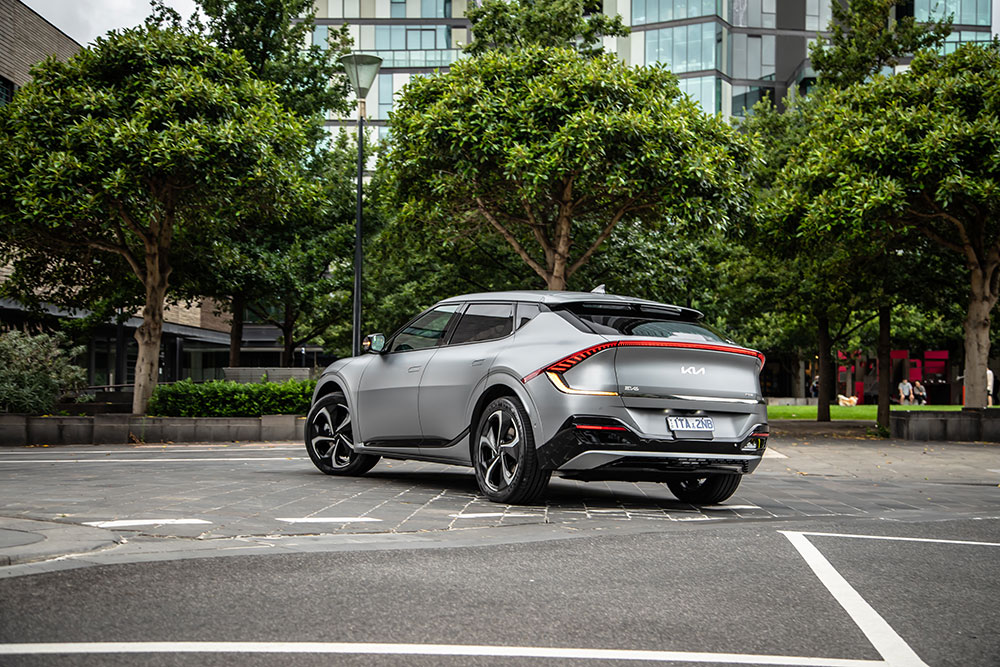 “The EV6 represents the transformation of Kia and where we are heading – a true halo for the brand.”

The Korean car maker is also coming off the back of a record year in 2021, which saw Kia shift into fifth place on the overall sales charts with 67,964 sales, just two spots and less than 5000 units behind third-placed Hyundai.

The arrival of the EV6 sees Kia well placed to capitalise on the rising interest in plug-in electric vehicles, which saw sales growth nearly triple in the past year from 6,900 in 2020 to 20,665 in 2021.

Kia’s version of the E-GMP platform is slated to spawn seven new vehicles globally over the next few years, but the local arm has said it is still working out what models will be suited for the Australian market and no decisions have yet been made.

Despite this, the company’s green car line-up is growing with launches scheduled in the next 12 months including the Sorento Hybrid, an all-new Niro, upgraded Seltos and a performance version of the EV6 dubbed the eGT EV6 which is due in late 2022 or early 2023.

As Kia’s first dedicated battery electric, the EV6 has no ICE equivalent, its driving performance underpinned by an 800V battery pack which can be charged from 10-80% in under 18 minutes when using a super-fast 350kW DC charger.

A 77.4kW high-voltage battery is standard across the range, with the differences in range and performance between the three models coming down to vehicle weight, and whether it is a single or dual motor model.

The dual-motor GT-Line offers the strongest performance of the trio but the least range due to its twin motors and standard all-wheel drive system.

For those looking for maximum range, the single-motor, rear-wheel drive EV6 Air is the best option, travelling up to 528km on a single charge. 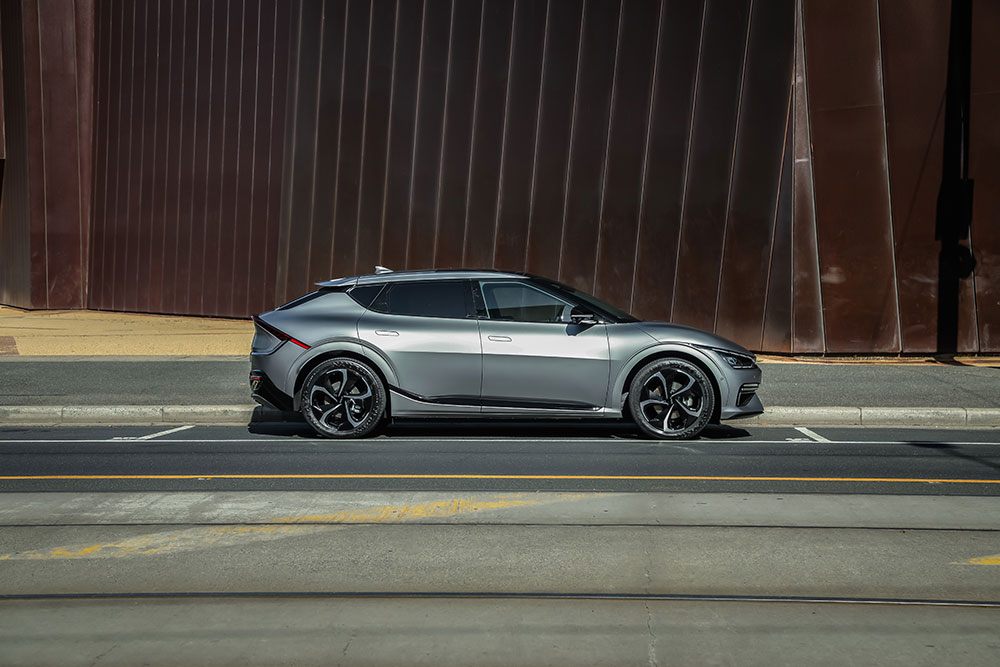 Kia said it also offered the greatest use of recycled materials throughout the vehicle interior, with cloth and vegan leather covered seats and other eco-friendly features.

Stepping up to the same RWD single-motor drivetrain in the better specified GT-Line adds 20-inch alloys and a host of other features as standard, but driving range drops slightly to 504km.

The top-of-the-range AWD dual-motor GT-Line pumps power and torque up to 239kW/605Nm and shaves 2.1 seconds off the single motor models’ 0-100km/h time, stopping the clock at a rapid 5.2 seconds, but range is further reduced to 484km.

Despite being an entry-level model, the EV6 Air is by no means a stripper, with standard features including LED lighting front and rear, LED welcome lights on approach, 19-inch alloys, low rolling resistance Kumho tyres with inner tyre absorber to reduce rolling noise, and 800V battery and charging.

The EV6 Air also features active air flaps in the front bumper to improve aerodynamics and extend range, solar glass all round to block out UV to keep the cabin cooler and reduce AC effort.

Kia expects the more tech-laden and feature-packed GT Line variants to be the strongest sellers, capturing roughly 40% share each, with the EV6 Air taking 20%.