Spare a thought for poor old Audi Australia. While some brands have only recently experienced the pain of delayed new vehicle deliveries due to supply chain issue, Audi has been holding out for the latest version of its popular A3/S3 small luxury car since 2020, when the model first appeared in Europe.

It’s been so long in fact that its last remaining A3/S3 stocks were exhausted in August 2021, and that batch of cars was in turn ordered from the factory as far back as 2020, before most of us had ever heard of a sinister ailment called COVID-19.

There’s been a sea of hand sanitiser pass under the bridge since then but suffice to say that even from behind their COVID-safe masks, the Audi personnel at the car’s recent Tasmanian launch couldn’t hide their delight at finally being able to unleash the new model on Aussie roads.

Audi has had plenty of other new models to keep busy, of course, but the A3/S3 is significant because it’s the automotive equivalent of a gateway drug.

Buyers who start out in the smaller and more affordable A3/S3 often move up the range to larger and more expensive models.

This is the fourth generation of the Audi A3 and its sporty stablemate the S3.

It’s described by the brand as an all-new model but is based on the same VW Group MQB platform as its predecessor, albeit with extensive reengineering in key areas.

While the A3 35 TFSI and 40 TFSI quattro models are also new and where the real sales volume is, Audi chose to showcase the talents of the sporty S3 at the car’s recent launch.

The S3 accounts for around 25% of sales and is a better specified and more high-performance version of the A3, so packs a more potent engine and a range of other luxury and performance additions to justify its steeper price tag.

Like the cooking model the S3 comes in Sedan and Sportback body styles and we spent an entertaining day putting both through their paces on roads around Hobart, including a spirited climb up the snaking tarmac on the slopes of Mt Wellington, which confirmed this is indeed a pukka performance model.

The sedan and sportback are dimensionally almost identical, with the former boasting a bit more load-carrying capability by virtue of its higher roof height. 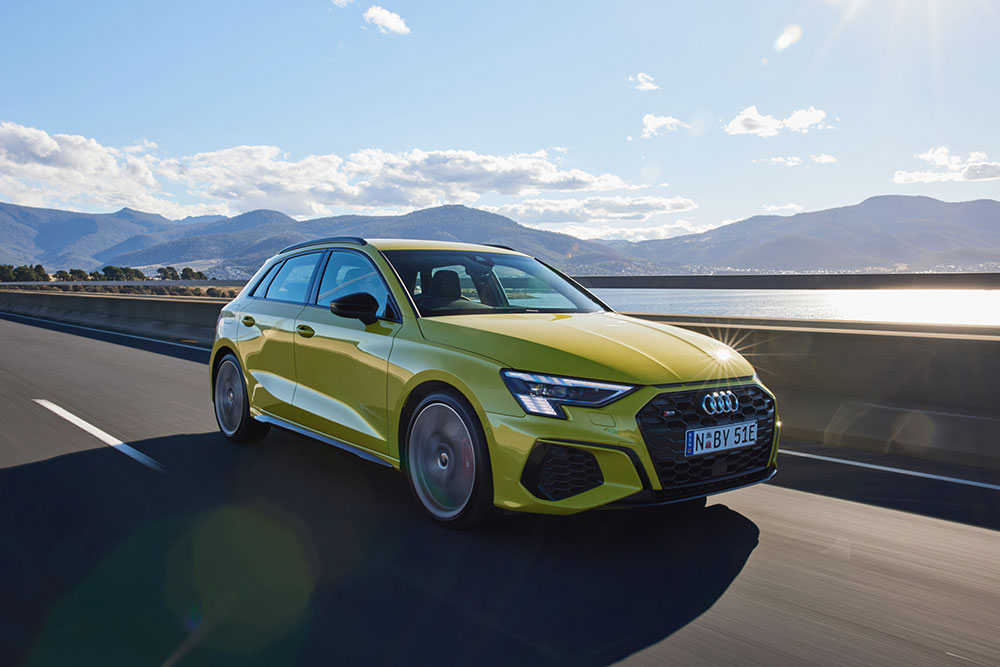 It’s also the better looking of the two, at least for mine, but sales are nonetheless expected to favour the sedan 60/40.

Versus the A3, the S3 boasts a different interpretation of the honeycomb grille, signature aluminium side mirrors, matte aluminium diffusers front and rear, quad pipes on both models and a rear boot lid spoiler on the sedan.

It all adds up to a comprehensive array of driver assistance systems.

Interior design and finish continue to be an Audi strength and the S3 boasts a new dash design that takes it in an even cleaner and more minimalist direction.

The cockpit angles the nicely integrated 10.1-inch MMI colour touchscreen slightly towards the driver and the system now recognises letters entered by hand, provides acoustic feedback and can be controlled using natural language.

Immediately ahead of the driver is a 12.3-inch digital screen which Audi calls “cockpit plus” and which now features additional functionality and multiple customisable screen display options.

Both are slick-looking displays with crisp graphics, high-quality resolution and good legibility.

Infotainment and connectivity have also taken a leap forward with the inclusion of Audi connect plus which means the S3 comes equipped with two sim cards for data service.

This enables the integration of online traffic, weather conditions, fuel prices, parking information and Google satellite map and is the same suite of connectivity features found on higher grade models. 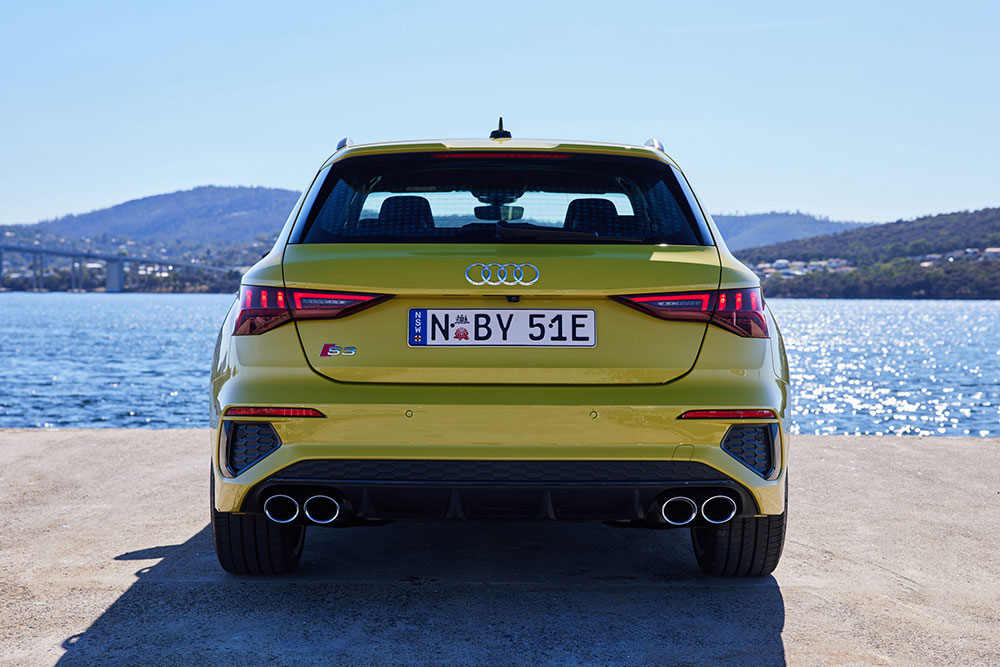 Additional functions enabled through the myAudi smartphone app allow for remote lock/unlock of the vehicle, Audi service request, emergency calls and more, thanks to the embedded SIM card.

Shift-by-wire tech also appears for first time on the S3 with a small toggle for the gear selector.

It looks different but is familiar and intuitive to use, with a simple finger-pull action to select Drive, pull again for Sport, or push forward for Neutral and Reverse.

The driving position is excellent, the diamond-stitch leather seats shapely and offering excellent comfort and support.

While there’s unlikely to be any complaints about the front-seat accommodation, rear-seat legroom is tight for longer-limbed passengers in either body style.

The sedan gets an electrically opening boot lid with gesture control but the Sportback hatch is manually operated, which seems a bit of a miss at this price point.

There’s a decent amount of luggage space in either body style, while the 40:20:40 split fold seat function allows for further expansion. There’s no spare tyre, though, so buyers must put their faith in a can of goo.

Other notable omissions include head-up display, which is an option, and the reversion to a less “sexy” circular steering wheel, in place of the sportier flat-bottom versions fitted to previous Audi S models.

The car maker says this is because the new S3 features capacitive touch sensors in the wheel that prevent the car from sending erroneous reminders to the driver to grip the wheel, even when you’re already doing so.

Being an S model, Audi has had all the requisite bits – engine, exhaust, gearbox, brakes, tyres, suspension and more – pored over by its specialist performance division, resulting in a car that is impressively spirited. 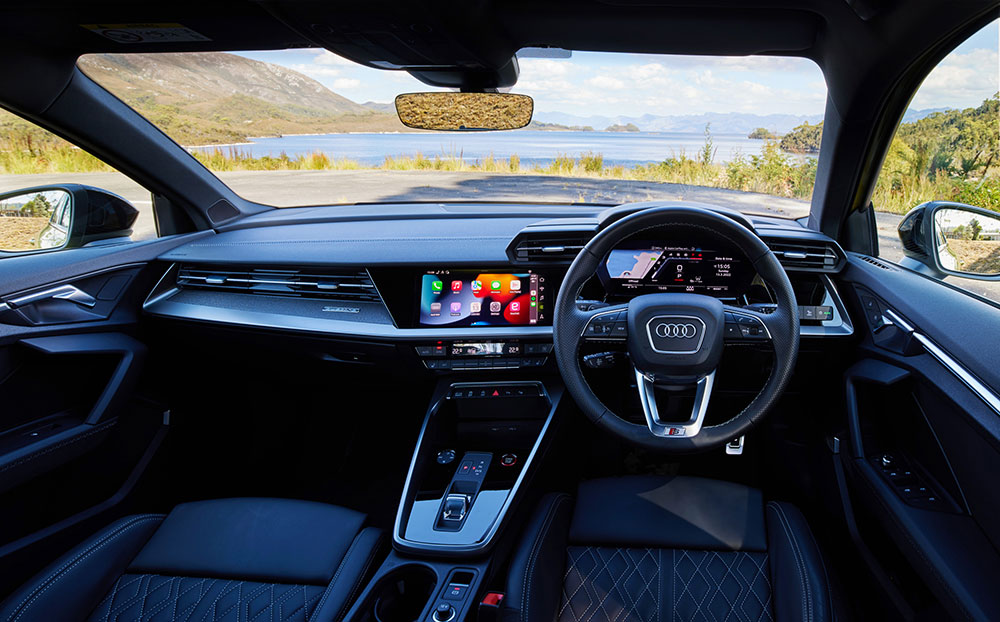 The stoppers clamp big 340mm ventilated rotors at the front and 312mm discs at the rear, providing sure-footed stopping power.

A quartet of exhausts pipes protruding from either side of the rear diffuser suggest this is something other than an urban runabout and indeed under the bonnet is the latest iteration of VW/Audi’s EA888, turbocharged 2.0-litre four-cylinder engine.

While its capacity is modest, the engine’s outputs are anything but – the figures of 228kW/400Nm being the kind of oomph a 5.0-litre V8 would have been proud of just a few years ago.

That’s also a healthy 15kW/20Nm more than its 2019 predecessor and when transferred through the standard seven-speed twin-clutch transmission and quattro all-wheel drive system, fires the compact Audi from 0-100km/h in an attention-grabbing 4.8 seconds.

The engine is terrifically torquey and responsive, providing wonderful driveability at low to middle revs but properly hair-raising performance at the other end of the tacho.

Put the foot down at a lazy 1500rpm and the response is instant, the thrust pressing you back into the shapely seats as the fast-shifting seven-speed S tronic dual clutch dispatches gears with unerring speed and precision. Steering-mounted paddle shifts provide the option of manual control if required.

Where the previous-generation S3 rode on magnetic-ride dampers, this version gets the latest electro-hydraulic adaptive units, which are better at predicting the damping force required for different roads and driving conditions.

The setup enables a separation of the electronic chassis and drivetrain functions so it’s possible to run the suspension in its default Auto mode, allowing the adaptive suspension to use its full range of movement, while still having the engine and transmission in the keener sport mode.

Left to its own devices and even in Auto the ride is clearly oriented towards handling than comfort, meaning it’s tied down and firmer than a standard A3.

While you probably shouldn’t buy an S3 for its ride comfort, you may well buy one for its ability to carve corners. 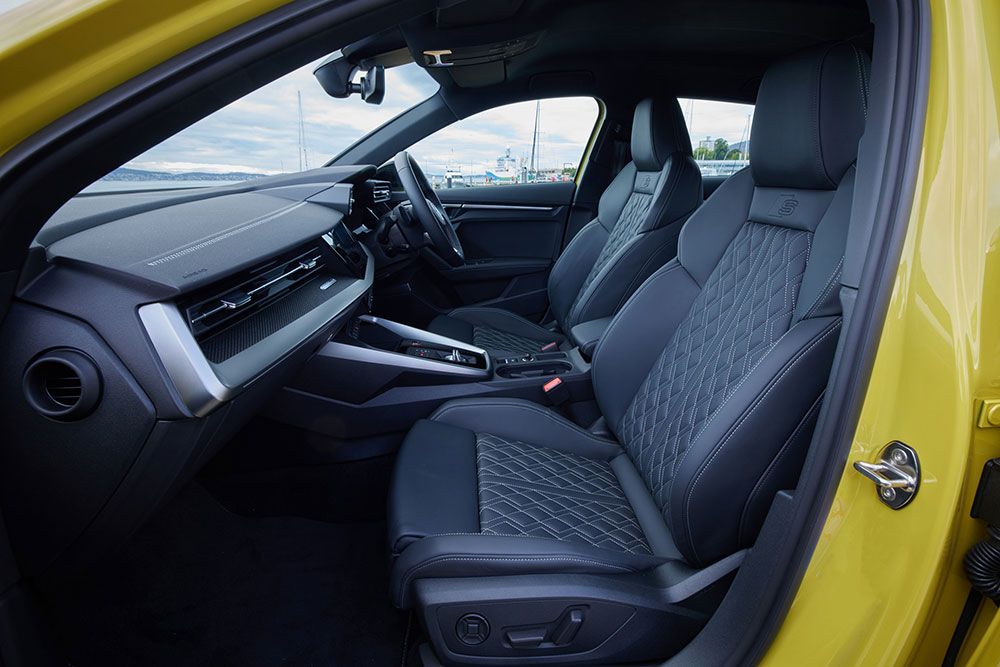 There’s all manner of trickery going on beneath this car, with sophisticated electronic systems controlling the all-wheel drive system, while simultaneously maximising traction and braking performance at individual wheels to deliver limpet-like grip through bends.

Over the twists, turns, humps and bumps of some particularly tortuous sections it felt immensely stable and confident, with ample reserves of grip and terrific reflexes.

There’s a pleasingly meaty on-centre feel to the steering, too – the S3 responding faithfully to even small inputs, but never feeling nervous or skittish.

And those beefy brakes are utterly confidence inspiring, with a firm and progressive pedal feel and strong bite the deeper you get into them.

Tyre rumble is a bit more prominent than you might accept in a regular model, particularly on coarse surfaces, but it’s not excessive and the payoff is the strong grip and excellent cornering balance.

In the current climate of severe supply chain restrictions, it should come as no surprise that the S3 is around $4,000 more expensive than its predecessor, but Audi points out that it’s added more standard equipment that was previously optional.

This is a thoroughly well-rounded and resolved package and the sort of performance car ordinary drivers could happily own and appreciate.

It’s not an out-and-out performance monster, that honour is reserved for the forthcoming RS3 due later this year, but it has ample performance, handling and braking to satisfy all but the most ardent of driving enthusiast.

The fact the S3 is not taxing to drive or high-stressed in its mannerisms, but can rise to the whip when required, makes it a more appealing proposition than the niche RS3.

It’s a well-balanced model that delivers plenty of thrills in a package that is handsomely styled and luxuriously appointed, its extra exterior and interior detailing bringing the wow factor that buyers are often looking for at this price point.