John Ewing14/04/2022
Car Reviews and Advisory
A diesel engine, decent off-road skill, and a roomy and redesigned interior are among the endearing attributes of this compact Jeep SUV. 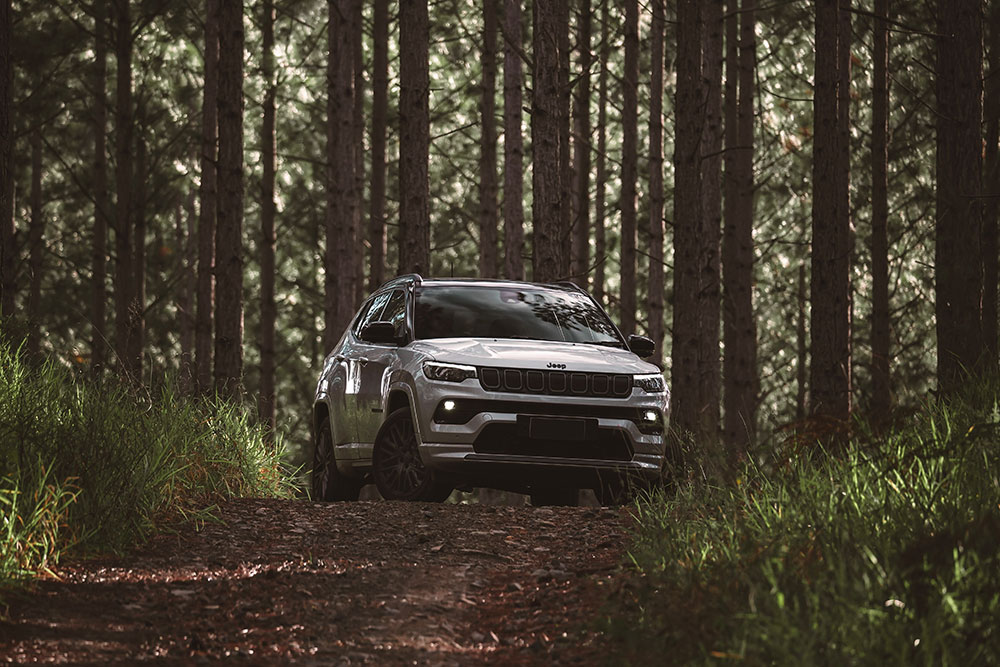 Jeep’s offering in the small SUV market, the Compass, has been given a substantial facelift delivering a significantly improved interior look and finish and featuring enhanced technology and driver assistance systems.

Fittingly, there are four points to the Compass range, with prices starting at $39,950 for the front-wheel-drive Night Eagle.

At this sort of money, the Indian-built Compass, particularly the higher-spec versions, is bumping up against some well-equipped and credentialed opposition across the small, medium, and even large SUV segments, including small SUVs from prestige brands like Audi and BMW.

The Trailhawk is available with a turbodiesel engine only, making it something of a rarity in the small SUV segment, along with the BMW X1 sDrive 18d and SsangYong Tivoli.

The rest of the Compass range is powered by a naturally aspirated 2.4-litre four-cylinder petrol engine.

All models, except the Night Eagle, send power to each corner via a nine-speed auto and Jeep’s Active Drive Low part-time all-wheel drive system.

A full-size spare wheel in place of the space saver spare fitted to other models is a most welcome addition.

The torque-proportioning AWD system drives the front axle under most conditions, but automatically shuffles drive to the rear when required.

A 4WD lock button allows the driver to lock drive to the rear axle for slippery off-road conditions, but with a single-speed transfer case rather than a more purposeful dual range system, there’s no additional low-range reduction available for serious off-road crawling.

Instead, the button keeps the transmission in low gear where overall reduction is around 20:1 compared to a ratio of around 40:1 that’s provided by more dedicated dual-range transfer cases. 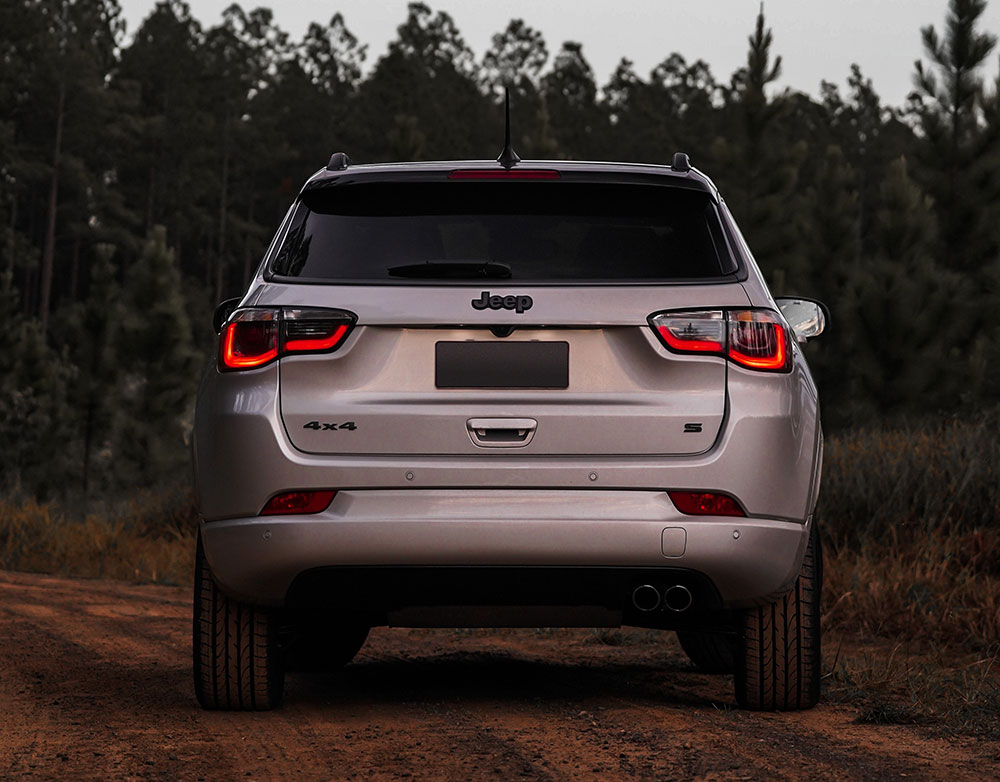 The relative lack of crawling ability tells in tougher conditions, including steep ascents and descents, with the driver forced to rely on the less effective hill descent control system in the latter instance, to assist with controlling speed.

That said, the Trailhawk is one of Jeep’s ‘trail-rated’ models, which means it will take you further off-road than most of its small soft-roader competitors, except for Suzuki’s Jimny.

It’s worth noting, too, that other all-terrain models with low-range gearing, such as the Isuzu MU-X and Mitsubishi Pajero Sport, can be had for similar money (spec dependant) to the Jeep and these will ultimately offer superior off-road capability.

The company claims improved functionality for the Trailhawk thanks to its bumpers, fog lamps and the camera radar now being housed in a higher position, affording greater protection during off-road use.

It's under the Trailhawk’s metal skin where the most obvious and welcome changes have taken place.

Standard across the range are handy tech features like wireless smartphone charging, Apple CarPlay and Android Auto, and DAB+ radio.

Ahead of the driver on all models bar the entry-level Night Eagle is a 10.25-inch digital instrument cluster.

Other notable features of the Trailhawk include leather-trimmed seats with red stitching accents, all-season floor mats, and a new 360-degree surround-view camera system.

The neatly finished interior is only let down by the inexplicably cheap and flimsy feeling switch stalks.

Unfortunately, the forward collision warning calibration on our test vehicle was overly alarmist, even when adjusted to its lowest sensitivity. 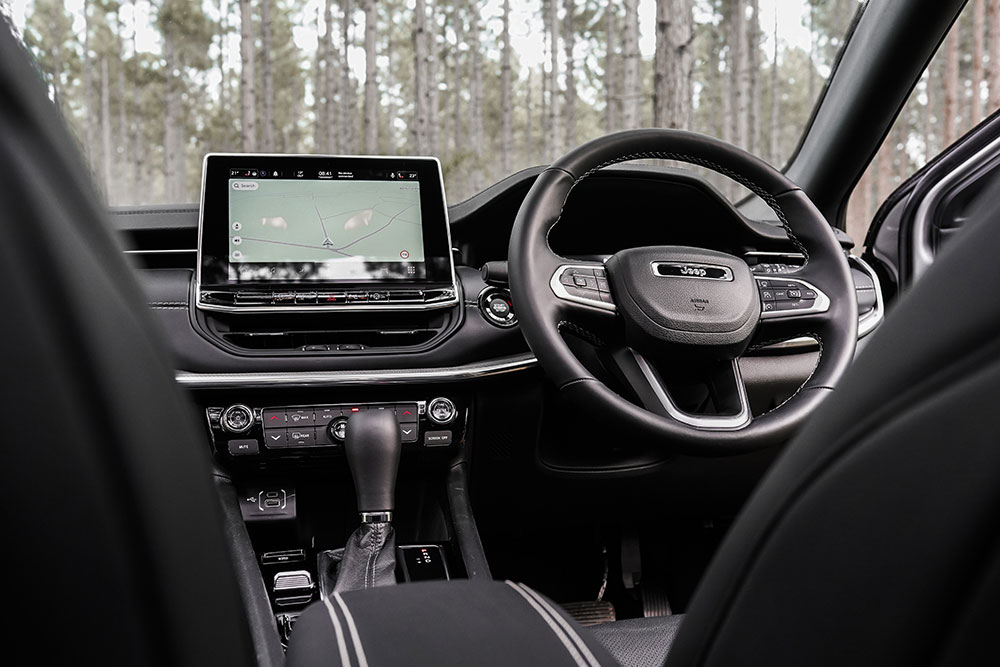 Likewise, the lane management system felt nervous and inconsistent in its operation, even when dialled back to its lowest setting, with the result the vehicle felt like it was pinballing down the road from one side of the lane to the other.

We ended up switching off the lane management, to halt its annoying steering inputs.

On the drivetrain front, the 2.0-litre turbodiesel exhibits some initial lag when getting off the line but otherwise provides sufficient urge for most conditions. With maximum outputs of 125kW/350Nm the diesel easily eclipses the petrol engine’s 129kW/229Nm.

The nine-speed auto gearbox is a suitable match up for the diesel, though paddle shifters aren’t provided for manual shifting and moving the shift-lever of our tester across into manual mode felt unusually stiff.

A Sport mode is also missing from the features list, but Jeep nonetheless claim the Trailhawk can gallop from 0-100km/h in a respectable 9.7 seconds.

In addition to its considerable torque advantage, the oiler’s fuel consumption is more frugal than the petrol models, returning a combined cycle 6.9L/100km. The engine is also Euro 6 emissions compliant, requiring Adblue urea exhaust fluid to treat the exhaust gases through the selective catalyst reduction system.

Out on the road, the Trailhawk’s suspension does a decent job of blotting out most lumps and bumps, though a series of blemishes such as road patching can have it feeling a bit fidgety.

Dynamically it feels secure and sufficiently competent but falls short of being sporty or approximating the finesse of the class leaders’ handling skills.

The steering is light and consistent but a tad remote and would benefit from some additional road feel.

Where the Compass can show many of its small SUV peers the way is interior space.

Leg and foot space in the rear is quite generous by class standards, though headroom is only fair.

The 438 litres of cargo space accessed via a ‘smart’ power tailgate is also good in class terms, while a flat-folding split rear seat allows larger items to be carried.

Jeep provides a competitive five year/100,000km warranty and five-year capped price servicing with service intervals of 20,000km/12mth for the diesel and 12,000km/12 months for petrol models.

The Trailhawk is rated to tow a maximum of 1,500kg with a maximum ball load specification of 150kg.

The updated Compass Trailhawk advances its cause thanks to numerous improvements, while delivering more interior space and off-road ability than most of its competitors. But the drive experience is only mid-field and falls short of the class leaders.

Unless the Jeep badge holds magical appeal for you, the relatively high price point could well see potential buyers weighing it against the range of quality alternatives available in this hotly contested corner of the SUV market.