Mazda delivers timely updates for its popular CX-5 mid-size SUV, ahead of the launch its all-new CX-60. 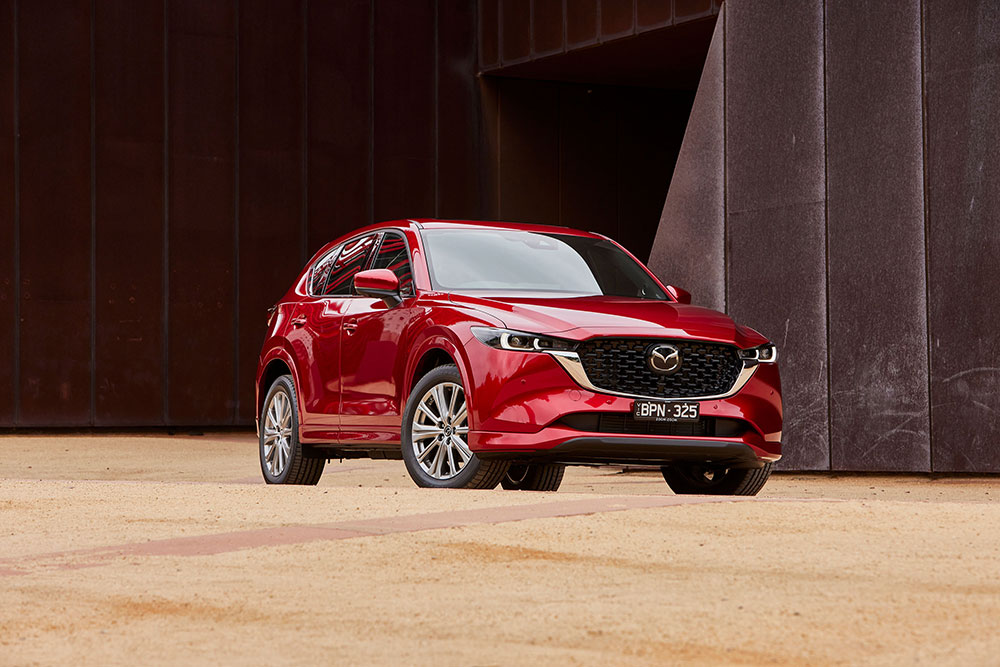 As other car makers grapple with supply chain issues that are pushing vehicle deliveries out by as much as 12 months, Japanese car maker Mazda finds itself in the happy position of having plenty of stock, short lead times and a freshly updated version of its popular CX-5 mid-sized SUV to take to market.

The facelifted CX-5 was launched to the media in South Australia’s Barossa Valley, with Mazda Australia Managing Director Vinesh Bhindi telling journalists the model remained one of Mazda’s most globally significant, accounting for more than over 3.5 million sales over the past decade.

Fully 230,000 of these sales have been in Australia, where Mazda enjoys market share above its global average and where the CX-5 was the number one selling SUV for seven consecutive years between 2013 and 2019.

Last year the Mazda ranked second behind the Toyota RAV4 in Australia’s critical medium-SUV segment with a healthy 24,968 sales.

This year, the vehicle that first brought Mazda’s ‘Kodo’ design language celebrates its 10th anniversary and to mark the occasion Mazda has endowed it with fresh looks, new features and more distinctive model grades.

It’s the latest of 10 different upgrades and refreshes for the CX-5 since it debuted in 2012, including a major styling update as recently as 2017.

The SUV segment shows no sign of slowing, according to Mr Bhindi, a fact that has prompted Mazda to push forward with the launch of a new mid-sized model later this year, designed to be complimentary to the CX-5.

The new Mazda CX-60 will boast similar proportions to the CX-5 but with an inline six-cylinder engine and rear-wheel drive layout, promises to be a more sporting and luxurious product.

Mazda executives are quick to dismiss suggestions the CX-60 will cannibalise sales of up-spec variants of the CX-5, pointing to the success of the complementary CX-3 and CX-30 and the brand’s eight-seat CX-8 and CX-9 models as examples of how adding additional models in the same category can grow overall market share. 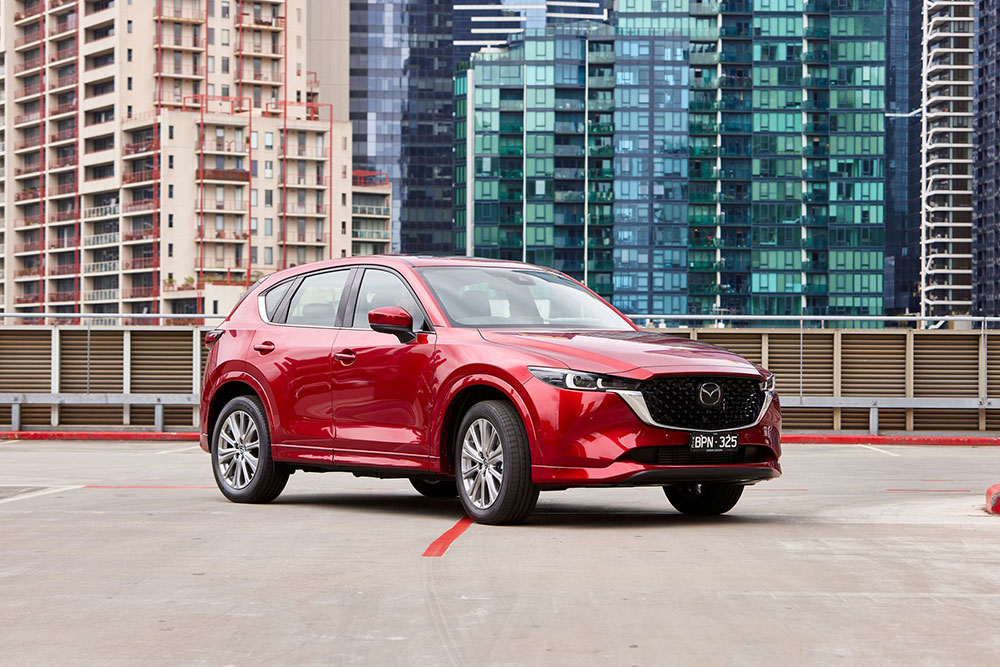 But right now, the CX-5 is the brand’s singular torch bearer in the medium-SUV category, this new version “stripping away the clutter and smoothing the surfaces”, in Mazda’s own words, to create a refreshed exterior look, with a bolder face that incorporates new headlights and grille.

Polished design remains a key part of Mazda’s appeal and this latest iteration of the CX-5 introduces a subtle but effective massaging of the proven formula.

The mid-size SUV’s basic proportions and underpinnings remaining untouched, but design changes at the front and rear differentiate it sufficiently from its predecessor.

Mazda describes the design changes as creating a more unified look, while at the same time more clearly distinguishing between the individual model grades, of which there are 12.

Changes include a revised front wing that extends further outward from the front grille, a new three-dimensional texture for the grille, plus revised head lights and taillights.

There’s also a new model dubbed the Touring Active that’s designed to appeal to sporty outdoor types, boasting a specific body kit and silver colour scheme on the front and rear bumpers and side garnish, and some unique interior design elements such as green accents on the air vents and seats.

There’s a raft of detail changes across the individual CX-5 models but all grades benefit from redesigned seats offering greater stability and better support.

Among the engineering changes are improvements to the six-speed automatic transmission, designed to make it more responsive and refined; a more rigid body with improved dampening control; new headliner material to reduce low frequency sound; and petrol-powered models also get a new steering vibration countermeasure that improves steering refinement.

On a single day’s drive through the Adelaide Hills and Barossa Valley, the CX-5 reaffirmed that it is an accomplished and impressively refined mid-size SUV, that delivers a fine balance of performance, ride and handling. Now, as before buyers have a choice of turbo and non-turbo four-cylinder petrol engines, plus a single turbodiesel variant, with a six-speed manual available on the entry level Maxx FWD and other variants boasting a six-speed automatic.

Pricing starts at a reasonable $32,190 for the Maxx FWD (front-wheel drive) and climbs through 12 variants to the Akera Diesel AWD (all-wheel drive) priced at $53,680.

We drove only the better-specified, more powerful and more expensive GT SP Turbo and CX-5 Akera Turbo variants, both with all-wheel drive and priced at $51,290 and $53,180 respectively.

This pair no doubt put their best possible foot forward for the model range in terms of performance, features and comfort with combined turbo and non-turbo GT Sport and Akera variants accounting for 55% of total CX-5 sales.

The biggest selling single variant, however, is the non-turbo 2.5-litre CX-5 Maxx Sport, available in FWD and AWD, which accounts for 32% of sales.

The non-turbo 2.5-litre unit is also the engine of choice for some 63% of buyers, so would have been a more representative option to review, were we given the option. 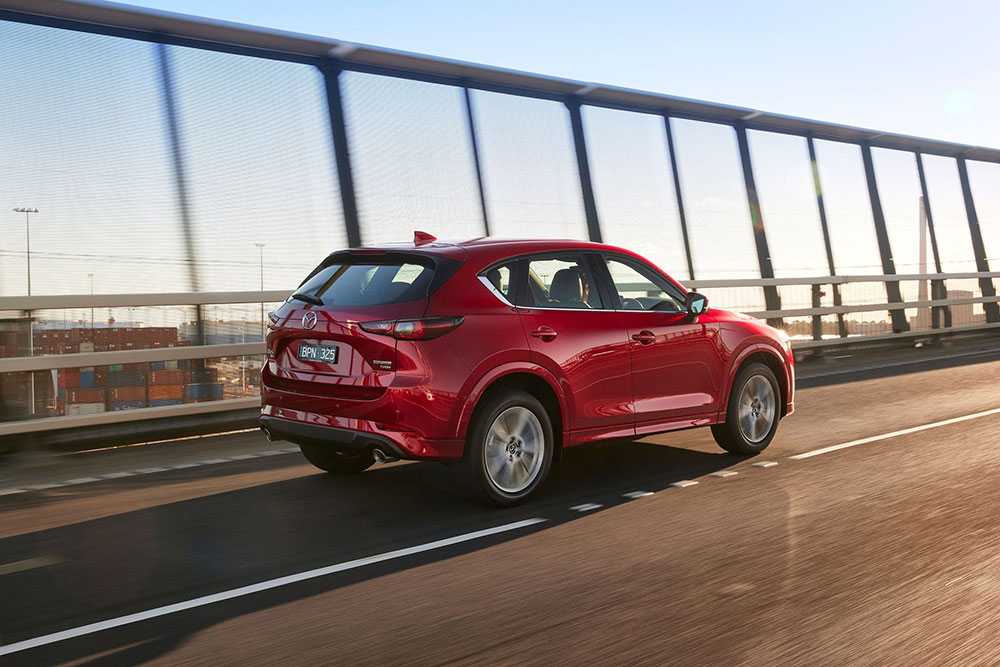 Other standard safety equipment includes front (driver and passenger), side
(front) and curtain (front and rear) airbags, all contributing to the CX-5’s continued hold on a five-star ANCAP ranking.

Mazda claims to have made numerous improvements to enhance handling, comfort, steering and dynamics, as well as further reducing NVH, but to be frank it’s been a long time between test drives of the CX-5, so we’re not able to comment on the efficacy of these changes.

Suffice to say that both the CX-5 Akera Turbo and the GT SP Turbo drive with impressive poise and polish.

Notable with either model is the smooth, fuss-free power delivery of the turbo four-cylinder.

This isn’t an engine that’s tuned for high performance histrionics, rather it’s designed to boost up early and maintain a nice flat torque curve which makes it feel almost diesel-like – albeit without the attendant noise and vibration.

The intercooled and turbocharged 2.5-litre engine produces a healthy 170kW/420Nm, which is a useful 30kW and 168Nm over the non-turbocharged version.

The extra performance does come at a cost, however, both via its $2500 higher list price and at the bowser, with the turbo sipping 91RON at rate of 8.2L/100km on the combined cycle or 1.2L/100km more than the non-turbo engine.

The six-speed automatic is responsive, refined and goes about its business without fuss, its shift aggressiveness able to be sharpened by selecting Sport mode via the Mi-Drive (Mazda Intelligent DriveSelect) system which also offers Normal, Off-Road, and Towing modes.

Rivals such as the Hyundai Tucson now offer eight-speed automatics on certain models, so in this regard at least the CX-5 no longer leads the pack.

Another area where the Mazda trails its Korean rival is in interior presentation and technology, with the CX-5 still using a conventional-looking instrument binnacle with analogue-style speedo and tacho.

There is a small 7-inch TFT display within the gauge cluster, but it stops short of the full digital dash setup found in the rival Hyundai Tucson and Kia Sportage. The CX-5 does have a central touchscreen through which its various menus are accessed and, while it’s perfectly up to the task, it lacks the wow factor of the larger screens in these models.

The addition of premium Nappa leather interior trim may assuage some concerns on this front with Mazda’s design, finish and materials quality as good or better than any of its rivals and the Akera further differentiated with standard features like a Premium Bose audio system with 249-watt amplifier and 10-speakers (including subwoofer).

Ride and handling are tuned to provide a comfortable and very competent driving experience.

While the CX-5 is clearly not designed to carve corners like an MX-5 sports car, the Mazda SUV boasts above average-dynamics that enable it to be driven enthusiastically when required.

This is particularly the case in the Akera Turbo, thanks to its combination of stronger engine performance and the extra grip of its all-wheel drive system.

On the twisting, red-gum-lined roads of the Adelaide hills, where good grip and handling are essential for safe touring at even moderate pace, the CX-5’s polish, poise, and easy driving manners made it a reassuringly comfortable travelling companion.

Riding as it does on larger 19-inch wheels with lower-profile tyres, the Akera Turbo steers with pleasing accuracy, going faithfully where its pointed without excessive body roll, understeer or other undesirable handling traits.

The trade-off with the lower-profile rubber is that ride quality does suffer somewhat and you feel more low-speed lumps and bumps, but it’s not so firm as to rattle teeth fillings.

In summary, the CX-5’s combination of appealing looks, modest mid-size proportions, polished driving manners, efficient powertrains, strong safety and attainable pricing has helped make it a popular choice with families and there’s nothing about this updated version that messes with that recipe.

The changes represent incremental but meaningful improvements to a winning formula and for those buyers wanting something even fresher and more exciting, the new Mazda CX-60 awaits in the wings.