CFMOTO’s new 800MT adventure bike fulfils its design brief of being able to tour a variety of terrain. Somewhere over the course of the 17 years that Chinese-made CFMOTO motorcycles have been imported to Australia, they have morphed from cheap and cheerful transportation into remarkably good value machines.

Thanks in part to its association with Austrian motorcycle, bicycle and sports car manufacturer KTM, the Chinese bike maker has improved its build quality while piling on the technology.

More importantly, CFMOTO seems to have developed a better understanding of discerning global markets such as ours, where motorcycles are viewed as something more than A to B transport.

Your correspondent has ridden just about every CFMOTO model imported here over the past two decades and I have long been impressed by how much bike you get for your buck.

In fact, that’s maybe too much the case as the bikes have historically been somewhat overweight.

The kilos are still an issue with this 800MT Touring, which at 231kg is on the heavy side for a mid-sized bike.

Most of that heft is up high in the 19-litre fuel tank which makes the bike top heavy – an undesirable attribute for a bike designed to be ridden in slow and technical terrain.

However, while the 800MT may need some sessions on the StairMaster to shed excess kilos, there are other areas where this bike shows significant gains.

Gripes such as the previously rudimentary suspension setup, nonsensical instruments and riding modes that simply don’t work, have all been sorted.

In fact, with its quality finishes, high level of creature features and competent handling the 800MT presents as a genuinely enticing prospect. 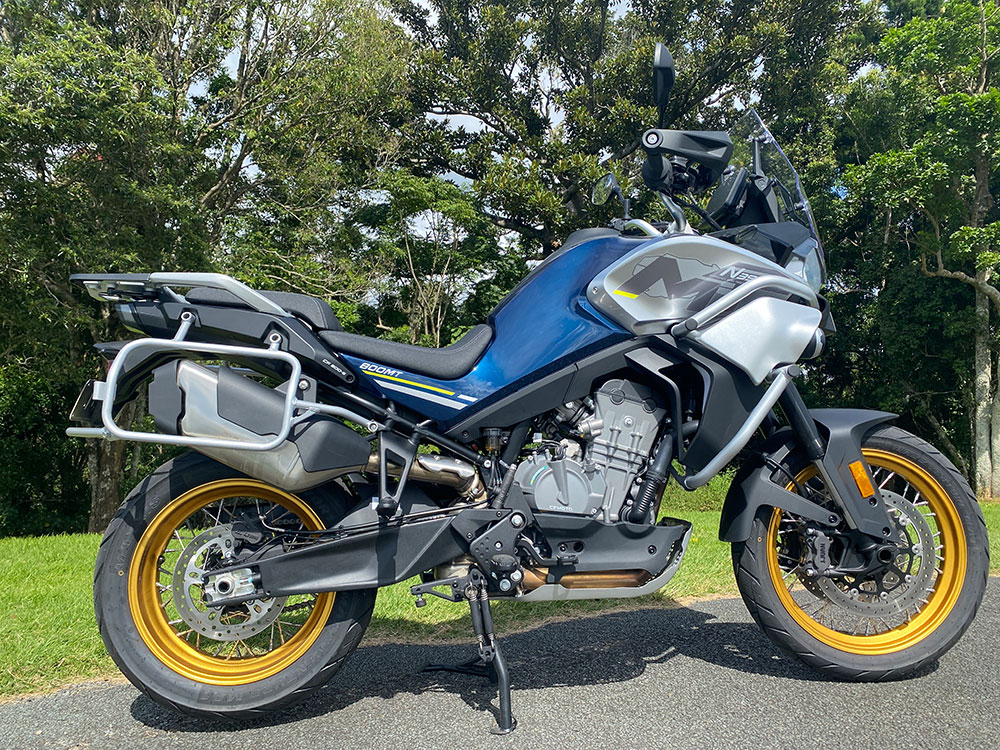 That campaign has just about exhausted the initial shipment, but stock levels are being replenished as more containers arrive and I wouldn’t be surprised to see CFMOTO throw in more value adds, such as the free luggage they have offered in the past with other models.

That’s an exhaustive list of kit on top of an already impressive array of standard equipment and it’s not all just frosting on a stale cake either, because the 800MT Touring offers capable performance and decent ride and handling, making it a valid prospect for riders keen on exploring.

Some drawbacks and glitches remain, of course, including the spelling of hand grips as “hand gripes” and warning as “waring”. While these are amusing faux pas and can be easily laughed off as a function of the bike’s Chinese-origins, the top-heavy weight issue is a more fundamental problem that should be of particular concern to shorter riders.

At 183cm, I had trouble putting my feet flat on the ground when stopped, thanks to the bike’s high 825mm seat.

It’s not just the height, either, but the seat width that contributes to the challenge of placing your heels on terra firma.

On a couple of occasions, I almost dropped the bike when stopped on slippery or unstable surfaces.

You also need to be careful about where you park the 800MT as its side stand is too short and it can cause it to topple over on sloped or uneven surfaces.

On a more positive note, the power plant between your legs is KTM’s 799cc parallel twin, which is recognised as one of the best engine’s the Austrian manufacturer has produced in recent years.

It’s a very capable unit but the power band is narrow, so you need to use the gears judiciously when stirring it along.

The engine pulls strongly from 3200rpm, but loses breath above 5000rpm, well short of the engine’s ambitious 9500rpm rev limiter.

We also noted some jerkiness in the throttle and a surging while holding a constant throttle at between 50-60km/h, but we’re told there’s a software fix coming for this. The overall gearing is too low for comfortable highway cruising, with the engine spinning at 4400rpm at 100km/h in sixth gear.

This also contributes to disappointing fuel consumption of 5.6L/100km. An optional sprocket for higher gearing would be welcome for Australian conditions, but an upside is that the low gearing helps mask the engine’s lack of low-down torque in off-road situations.

The transmission features clutchless quick shifter for slick and functional shifts up and down the ratios, while the slipper clutch works well to prevent rear-wheel lockups on ham fisted downshifts.

Working the gears and running the engine hard produces an entertaining growl from the exhaust but the engine runs quite hot, resulting in a steady blast of hot air from the radiator back on to your shins.

This is manageable out on the highway when there’s plenty of air flow but is decidedly uncomfortable in slow-moving urban traffic.

The bike features two riding modes, Sport and Rain. The former does what it says on the label, while the latter dampens throttle response and is handy for riding in slippery conditions, partly compensating for the lack of traction control, which is a feature of some rival bikes.

CFMOTO uses Spanish J. Juan brakes (now owned by Brembo) on most of its models and they are reasonable performers.

On the 800MT they lack some initial bite, which is not an issue when riding on gravel, while the ABS allows some initial rear-wheel lockup which allows the tyre tread needs to dig into the gravel.

If you hit the brakes hard in a panic stop, the hazard lights automatically flash which is a great safety feature that should be standard on all bikes.

Cornering ABS is also a worthy safety feature that helps prevent the front tyre slipping out from under you in a bend.

Ride comfort is on the plush side, meaning the 800MT suits our bumpy urban streets and B-grade country roads equally well.

The suspension is adjustable for compression, rebound and preload, so most riders should be able to find suitable settings for their weight and riding style.

Access to the rear shock preload adjuster is difficult, though, as it’s hidden under the tank and seat. 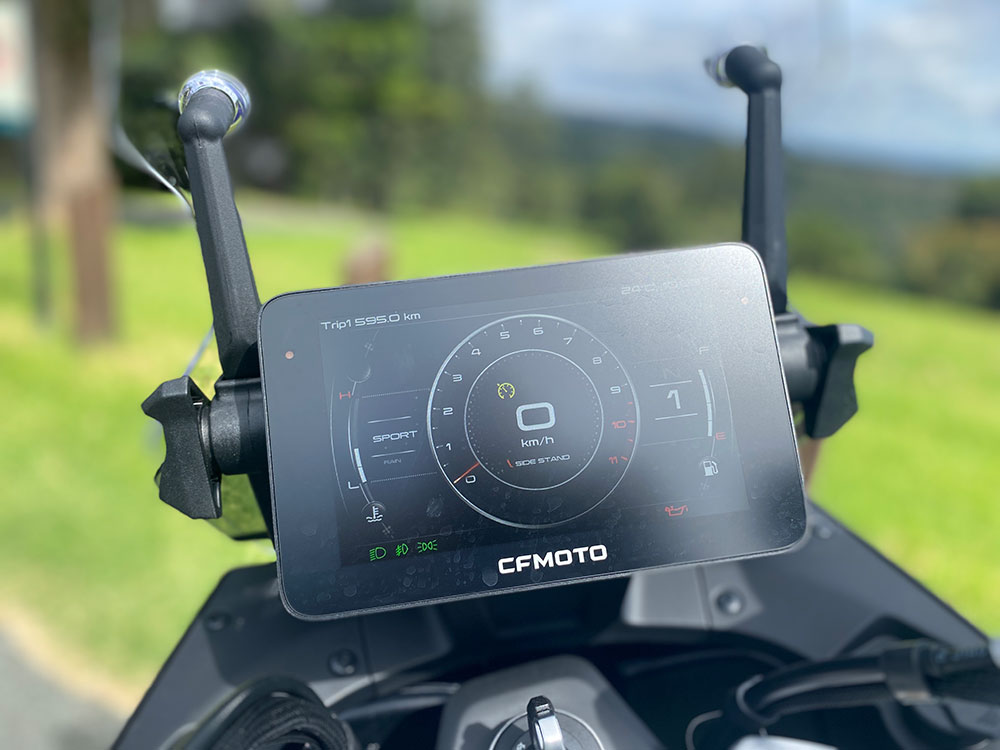 Cruise control is a welcome addition and is easy to operate but can only be deactivated by tapping the brakes or declutching, not rolling back the throttle.

It isn’t unerringly accurate either and allowed the bike to drift over my set speed by up to 5km/h at times, even on a flat surface. It’s best to keep an eye on the speedo, lest you find yourself in trouble with the man.

Fortunately, that’s easy because the 800MT has one of the biggest instrument screens of any bike and it is easy to read in most conditions, expect when the sun is shining directly on the screen.

The large TFT instrument panel offers a plethora of information on its home screen, so there’s no need to scroll through various sub-menus.

If you do choose to go scrolling there are myriad other functions and adjustments, including for the seat and hand grip warmers and you can change most of these settings on the fly.

Riders will find the 800MT has a neutral riding position with a plush seat that should see you comfortably through its 300+km fuel range without a break.

Pillions will also find their wide and flat perch very comfy with generous handles to grip.

The windscreen provides moderate protection and can be adjusted up to 5cm by knobs on either side of the screen, but tall riders may still experience some wind buffeting even in the highest position.

It would have been better if the screen could be adjusted by just one knob on the left so you can keep your right hand on the throttle grip.

The steering is ponderous thanks to the 19-inch front wheel and 853mm wide bars, but this suits the adventure riding style for which the bike is intended. The handlebars may be too high for some short riders, but you can easily roll them back for a more relaxed reach. You certainly won’t need bar risers to accommodate riding in the standing position across rough surfaces. The wide bars make legal lane filtering tricky but perched atop the bars are large truck-style mirrors which give a clear view of what’s happening behind but can snag on other vehicle wing mirrors in traffic.

At night, the LED headlight casts a very bright and white headlight with good dispersion and eyebrow-singeing high beam, especially when used with the auxiliary driving lights, although you will have to disable the auto light function.

In summary, despite some shortcomings, this is now a desirable bike for Aussie adventure riders. The 800MT competently fulfils its design intention to tour a variety of terrain, encouraging riders to throw on some luggage and go chase the horizon.