Subaru has taken a leaf out of the marketing playbook book of Mortein with the latest iteration of its popular BRZ sports coupe.

Back in the day the household insecticide was sold with the advertising tagline, “when you’re on a good thing, stick to it”, which is precisely what Subaru has done with this second-generation version of its handsome hero car.

With the new BRZ that’s exactly what Subaru have done, evolving their popular sports coupe to deliver a heightened level of fun and driver engagement.

Debuting in 2012, the original BRZ and its Toyota 86 doppelganger quickly achieved cult status for delivering head-turning looks and high levels of driver engagement at an affordable price.

But after a decade in the fast lane the original BRZ was starting to look a little long in the tooth, with many enthusiasts keenly anticipating the new model which arrived earlier this year.

Unsurprisingly, the new BRZ proved an instant hit, with Subaru Australia’s original allocation of 500 units quickly finding homes with performance car enthusiasts around the country, perhaps leaving Toyota to rue its decision to delay the launch of its rebranded GR 86 twin until the second half of this year.

Both models offer affordably priced entry into the sports coupe experience, the BRZ Coupe with six-speed manual listing at $38,990 and the Coupe S manual at $40,190.

Opting for a self-shifting transmission adds a hefty $3,800 to the cost, but we’ll come back to that later.

Even so, prices are more than competitive with that other much-loved rear-drive sports offering, the Mazda MX-5.

Seven airbags including full length curtains and a driver’s knee airbag are also fitted across the board.

Manual models also get blind-spot monitoring, lane change assist and rear cross traffic alert as part of the standard safety kit, but buyers opting for the more expensive auto transmission get a more comprehensive driver assistance package thanks to the addition of Subaru’s Eyesight safety system on BRZ for the first time. 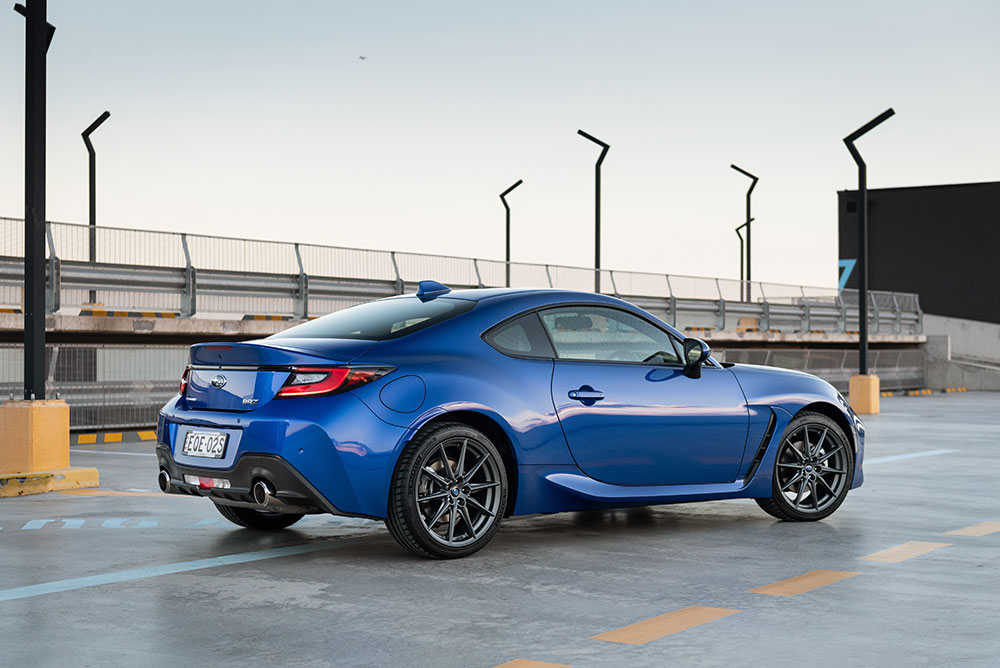 Equipment points of difference between the Coupe and Coupe S are confined to the significantly updated cabin, with the latter boasting heated front seats, a blend of natural and synthetic leather and Ultrasuede accented seat trims (in lieu of cloth), plus distinctive red stripes on the upper and lower sections of the front seats.

The redesigned cockpit retains a similar look to the previous model but delivers a cleaner more intuitive layout with a new 7-inch customisable digital instrument cluster and an 8-inch central touchscreen with navigation, DAB+ radio, Apple CarPlay and Android Auto all standard.

Subaru says the new body boasts around 50% more torsional stiffness than its predecessor, while front lateral bending rigidity has increased by 60%, which bodes well for handling dynamics.

Stir in enhanced front and rear suspension mounting rigidity and a range of other chassis tweaks, including revised bushings, dampers, and stabiliser bars, and you have a recipe for more precise handling and enhanced ride quality.

On the road the sum-total of the changes adds up to a finely balanced and communicative rear-drive chassis that delivers dexterous and responsive handling, plus perfectly weighted, accurate and precise steering.

Grip levels are noticeably higher than the old model, too, courtesy of an upgrade to 215/40R18 Michelin Pilot Sport 4 tyres on 18-inch 10-spoke alloy wheels.

You do need to turn the audio up to compete with the intrusive tyre and road roar generated by the new rubber, however, especially on coarse chip road surfaces.

The suspension tune is biased for sporting ability, too, so the ride is decidedly firm yet civilised enough for daily driving.

A full-size spare wheel is standard, which is laudable in such a compact sports coupe, but perched as it is in the centre of the boot floor it impacts the usable cargo capacity of the 201-litre boot.

Unlocking and folding the one-piece rear seat to expand the load area is at least now easier, thanks to the inclusion of a release strap in the boot, in addition to buttons on the seat top.

Given the vehicle’s two-door design and sporting intent, it should come as no surprise that access to the two rear seating positions is awkward.

Once you do get back there it proves an impractical option for all but small children, thanks to limited head space and negligible foot and leg room. There are two child seat anchor points, but fitting child seats and their occupants is likely to prove physically tortuous.

So, despite being classified as a 2+2 the BRZ is ultimately all about the driver and to a lesser extent the front passenger, who both enjoy updated and repositioned sports seats, which hug the body while providing excellent comfort and support.

While the BRZ’s sports car classification allows us to forgive it such practical transgressions, there’s no slack cut when it comes to the powertrain. Pleasingly, the new model doesn’t disappoint in this regard and in fact ups the ante via a new 2.4-litre boxer engine nestled beneath its lightweight bonnet.

The new engine is based on Subaru’s FA20 cylinder block, with increased bore diameter to achieve the larger capacity of 2.4 litres.

Larger intake ports and revisions to the fuel-injection system are among other mechanical revisions designed to enhance performance, reduce noise and vibration, and improve fuel efficiency.

The engine is less ‘peaky’ than before and noticeably more eager in its throttle response, delivering the goods throughout its free revving range.

Subaru has chosen to not go down the forced-induction route which might be a surprise to some buyers given the brand’s long association with turbos via the WRX.

However, much like Mazda’s brilliantly engaging MX-5 sports car, the lively atmospheric engine works sweetly in tandem with the revised chassis, and everything just clicks.

Both the manual and auto gearboxes have also been updated for this iteration, with the six-speed manual likely to remain the enthusiast’s pick, although the paddle-shifter equipped auto does a good job and is the more refined drive in our view.

Considering the extra safety kit that comes with the auto, it’s also arguably the better choice for many buyers.

The upgraded engine sips 98 RON premium unleaded exclusively at a less than thrifty rate of 8.8L/100km for the auto, or 9.5L/100km for the manual on the official combined cycle.

Like other Subaru models, the BRZ comes with a five year/unlimited kilometre warranty plus a five year/75,000km capped price servicing program.

Subaru claim the latest BRZ has been re-engineered and redesigned inside and out to be faster, sexier, and more fun than ever. Having spent an enjoyable week at the wheel of this enthralling sports coupe, you won’t hear a murmur of disagreement from us.

* At the time of writing Subaru had just announced the order books were open for the MY23 BRZ, with prices increasing to $40,290 for the Coupe and $45,390 for the Coupe S.