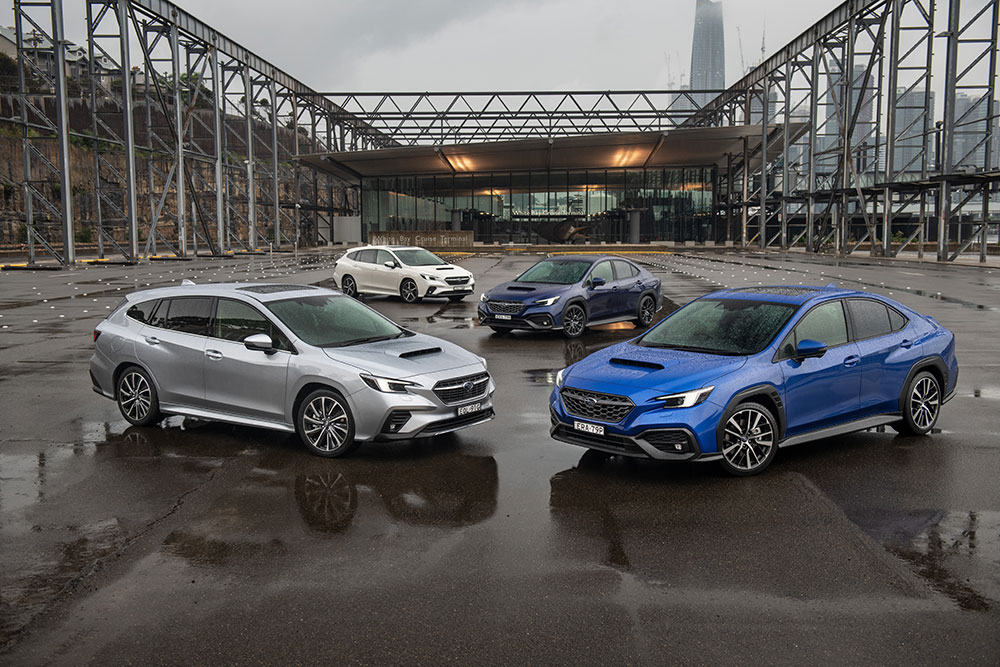 It’s hard to believe the Subaru WRX has been with us for almost 30 years, with the original launched in Australia way back in 1994.

Through successive generations, the WRX has gone from a raw, rally-bred enfant terrible to a more sophisticated and mature machine, as evidenced by the recently launched fifth-generation model.

The all-new WRX comes in sedan and sport-wagon body styles with turbocharged boxer four-cylinder engine and all-wheel drive as standard across a three-tier model grade in each body style.

Pricing starts at $44,990 for the entry-level WRX AWD sedan with six-speed manual, or $48,990 for the WRX AWD Sport with self-shifting Lineartrontic (CVT).

This new model doesn’t look dramatically different to its predecessor, but the sedan looks more muscular than the Sportswagon, thanks to its distinctive flared guards and dark side garnishes on sills and wheel arches.

Other performance-inspired design influences include air outlets on the trailing edges of the front wheel openings and a lip-style boot spoiler.

Without the side garnishes the Sportswagon is less aggressive looking and sits up a bit taller, with more ground clearance and a higher ride height than sedan. Subaru said it was targeting different demographics with the two body styles and expected the sedan to have a heavier male skew, while the Sportswagon would attract a broader mix, including families.

This is also apparent in the way the two drive, with the Sportswagon softer and more compliant than the sedan, despite both riding on standard 18-inch alloys and having the same MacPherson strut front and double wishbone rear suspension.

Both body styles are underpinned by a new Subaru global platform which is claimed to be 28% stiffer than its predecessor, with associated ride and handling benefits.

Some models equipped with the Lineartrontic CVT also benefit from electronically controlled dampers, which enhance handling while refining ride quality.

But the big news for most WRX fans will be the fact that under the bonnet of all models is a larger displacement 2.4-litre turbo four-cylinder engine, replacing the previous turbo 2.0-litre unit.

The increase in capacity delivers more linear response compared with the old ‘freight-train’ arrival of maximum torque from some of the previous models.

Peak power of 202kW is a modest 5kW increase over the previous WRX and the 350Nm of torque is identical, but the extra cubic capacity means the engine is less stressed, and has a broader and more usable torque curve that ensures better low rpm driveability and more immediate response.

In terms of outright performance, Subaru was initially reluctant to table a 0-100km/h time for the new model, saying instead that its engineers were more focused on the way the new car came together in totality.

Nevertheless, after some badgering from assembled journalists, company representatives offered up an indicative 0-100km/h time of 6.0 seconds for the manual and 6.1 for the auto, which compares favourably with the former models’ 6.3 seconds. 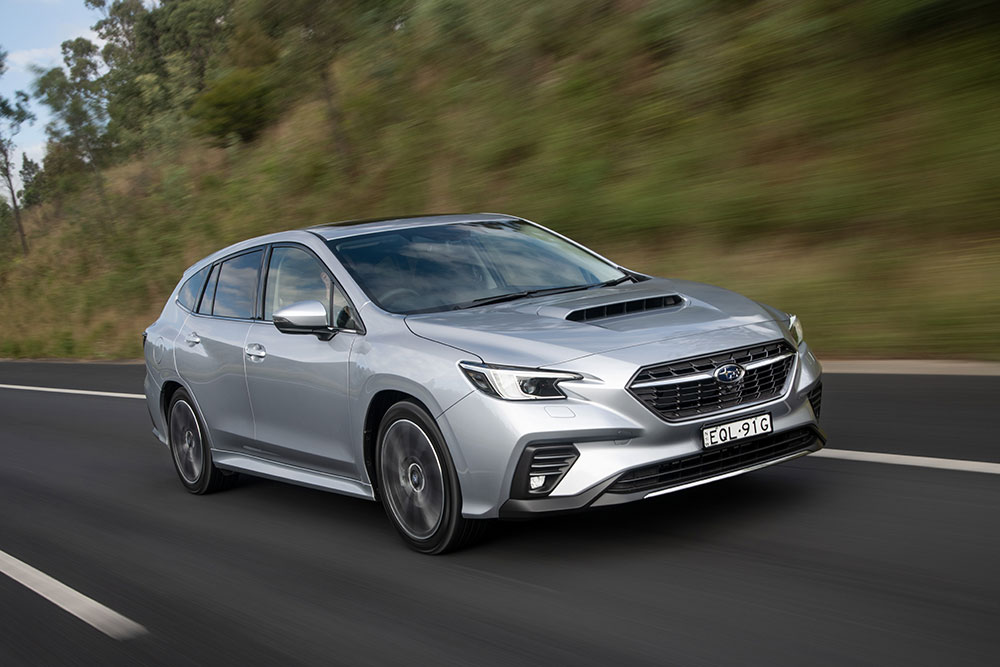 Enthusiasts will likely choose the sedan, matched with the six-speed close radio gearbox, which is clearly the most performance-focused model.

However, the more widely available Lineartronic CVT, aka ‘Subaru Performance Transmission,’ is the better all-proposition for those using their WRX as a daily driver.

There’s also a compelling case to make for the CVT variants from a safety perspective, because only these vehicles get Subaru’s Eyesight safety technology as standard.

That’s a shame for manual enthusiasts because the latest generation of Eyesight is the best yet, boasting improved processing speed and revised camera hardware.

Other than this, all WRX models get eight airbags as standard, including a front passenger seat cushion airbag, with other standard safety equipment including blind spot monitor, lane change assist and rear cross traffic alert.

The newly developed Lineartronic auto is undoubtedly the company’s best CVT yet, delivering faster upshifts and downshifts compared to the outgoing model.

For those wanting that bit more control, tS trim variants of the sedan and Sportswagon offer a Drive Mode Select feature that allows the driver to further sharpen the car’s driving dynamics, by configuring the steering feel and the electronically controlled damper settings. 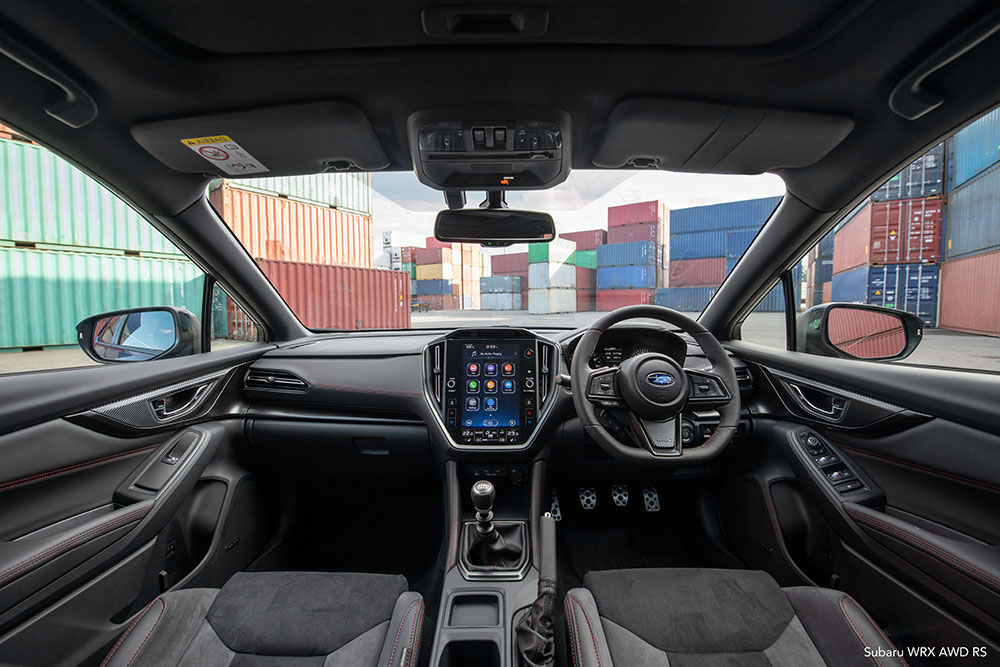 These variants also get a two-mode centre diff setting (Standard and Sport) which in Sport mode makes the centre diff more RWD biased.

Vehicles with the CVT get a Variable Torque Distribution (VTD) AWD system that typically distributes torque 45:55 front to rear but can electronically alter the torque split to enhance handling.

Whichever setup you choose, it all adds up to remarkable grip levels and impressive cornering ability.

Out on the road the smoother and more muscular delivery of the larger engine shows the WRX to be a much more driveable machine, while the improved handling and stronger body shell are appreciated over more ragged sections.

Whether rowing the more focused manual sedan through bends or taking it a little easier in the softer but still quick Sportswagons, the combination of all-wheel drive traction and muscular mid-range turbo thrust highlights the WRX’s impressive speed and grip.

It’s not just the powertrain that’s improved either, with the new model showing more polish across the board.

From its ride to its steering, to the more upmarket and comfortable interior and superior NVH, the WRX is now the sort of performance car a grow-up can aspire to.

Inside, shoulder room has been expanded both front and rear, and there’s more rear seat legroom thanks to a longer wheelbase. 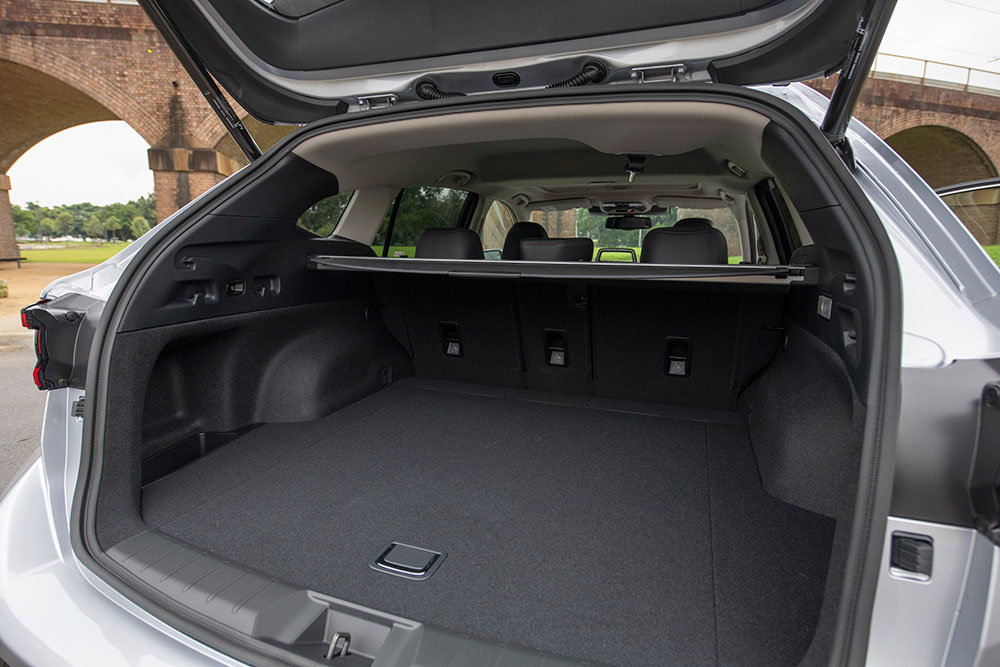 The new cockpit design features large and easily read instruments, with prominent speedo and tacho either side of a 4.2-inch multi-information display.

Unlike past WRX generations, this model will not offer a high performance STI variant, but there is a range of STI accessories available, including body enhancements, an 18-inch alloy wheel, and uprated suspension components.

In summary, the Subaru WRX maintains all the speed and capability of its predecessors and is every bit as exhilarating to drive, but is a more refined and sophisticated proposition overall.

Critics may argue that the softer Sportswagons lack the hard performance edge of the manual sedans, and are therefore not true to the WRX ethos, but the combination of the auto gearbox and Sportswagon body style has effectively created a different vehicle within the range, which significantly broadens the car’s appeal.

*At the time of writing Subaru said the wait time from order to delivery was between two and three months.

ANCAP CRASH RATING: Not yet rated.