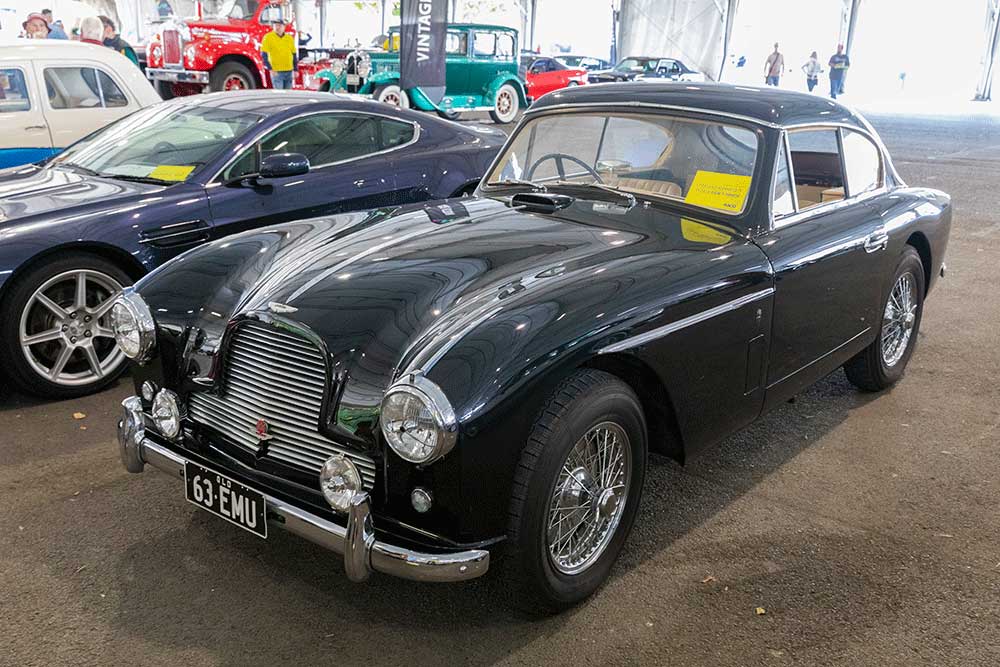 An immaculate 1957 Aston Martin has driven off with the coveted 2021 Judges’ Choice award at RACQ MotorFest 2021.

Judge and RACQ Motoring Editor Ged Bulmer said the judging panel was full of praise for the Mustang and Volvo, but it was the rarity and immaculate condition of the DB2 that won the day.

“With its distinctive Tickford coachwork and period-specific 16-inch wire wheels, this is a wonderful example of one of the finest British sports cars of its era,” Mr Bulmer said.

The Judges’ Choice and 10 category winners were announced at MotorFest 2021, held for the first time at the Brisbane Showgrounds.

RACQ’s Lucinda Ross said the new venue had been embraced by the thousands who attended the event which returned after last year’s COVID-enforced cancellation.

“We had almost 10,000 people through the gates and about 350 classic and collector cars on display,” Ms Ross said.

“This was a great result and we are already looking at ways to make the event bigger and better next year.”

The entry fee of a $2 gold coin donation saw nearly $19,000 raised for the RACQ Foundation.

A highlight of this year’s MotorFest was the new Future Zone – a dedicated area where the automotive industry showcased exciting new features and innovations available.

This addition proved popular with patrons who were keen to learn more about the future of mobility from hybrids to plug-in-hybrids, battery electrics to fuel cells, and home charging stations to high-voltage fast chargers. 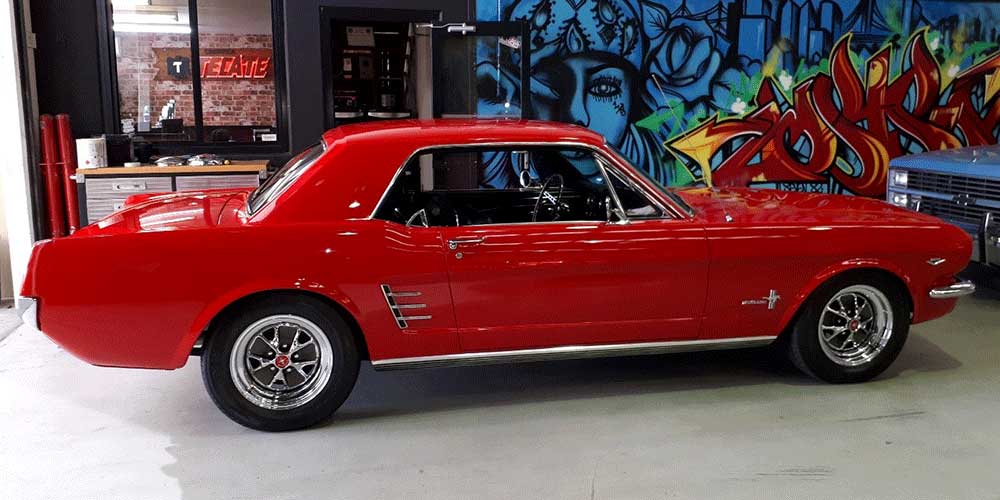 A terrific example of a first-generation Mustang, John Rayner’s gorgeous ’66 Coupe won out from a strong field of American metal. Judges loved the purity of its unadulterated lines, quality paintwork, tight shut lines, and period spec wheels. Launched less than 18 months after the very first “pony car” debuted to thunderous acclaim, the ’66 Mustang stands as the best-selling Mustang of all time, chalking up almost 600,000 sales. Few today would be in as fine a fettle as this cracking car. 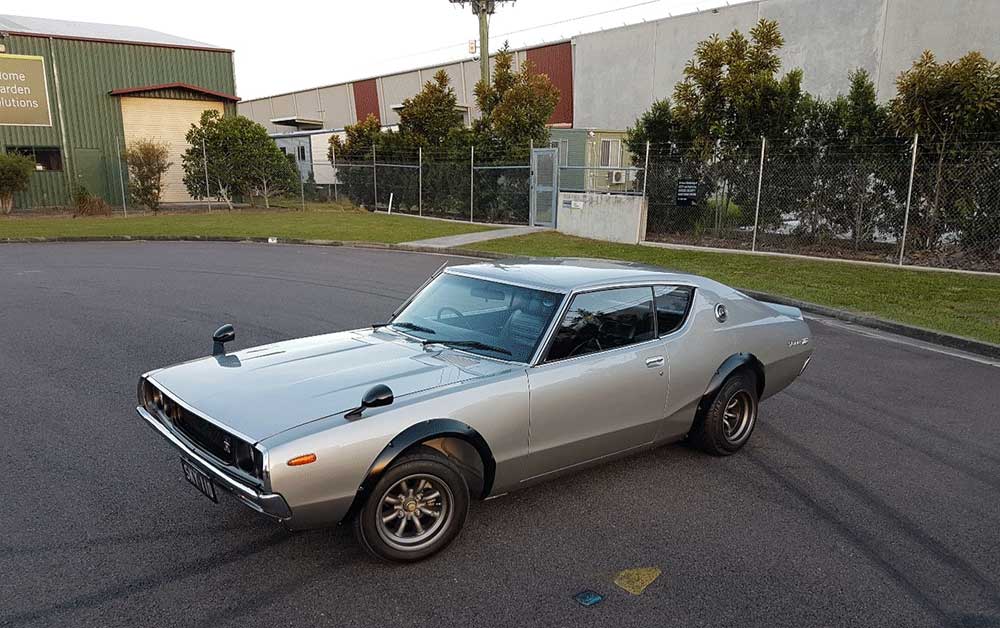 Long before Jim Richards and Mark Skaife made the R32 Nissan Skyline GT-R an Aussie touring car legend, the Skyline had established a reputation in its Japanese home market as one of that country’s great sports coupes. Scott Turner’s ’74 Nissan Skyline C110 holds a special place in the Skyline’s storied history, as it was the model that reintroduced the trademark round taillights of earlier generations, which went on to become a Skyline hallmark. As the ancestor of a line of venerable Japanese performance cars, Scott’s Skyline was lauded by judges for its rarity, plus its unadulterated and original presentation. 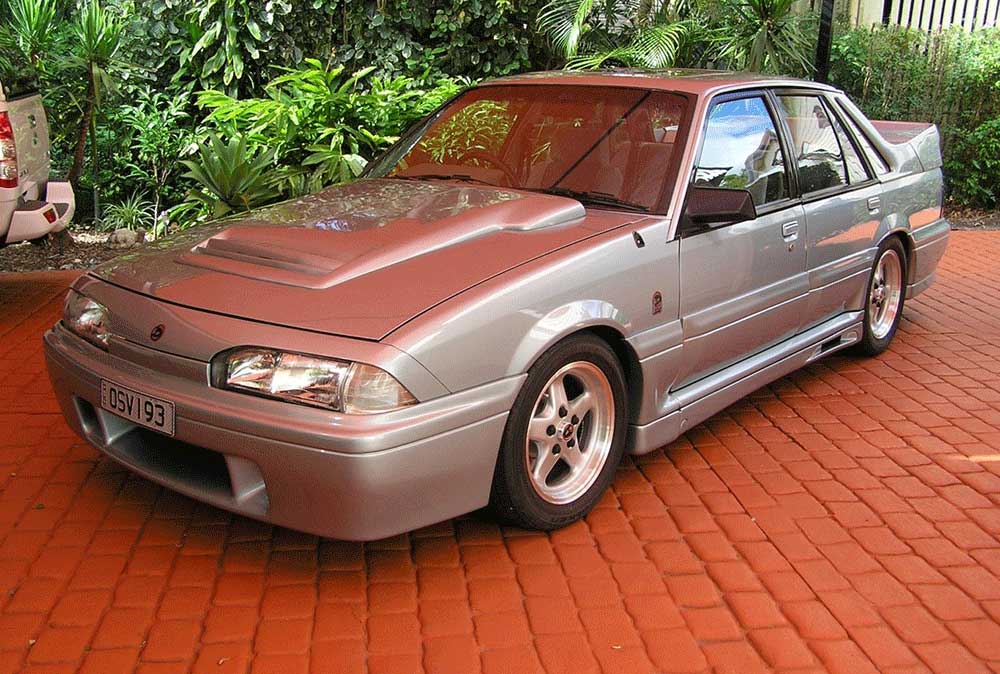 Australian cars are always one of the most hotly contested categories at MotorFest and this year’s strong field ranged from an unmolested 1957 FE Holden sedan to a mighty Bathurst-spec Valiant Charger RT E49. In the end, judges found it impossible to go past Phillip Rizzo’s immaculate 1988 Holden Commodore Group A SS. The Walkinshaw, or “Plastic Pig” as it’s sometimes known, is one of the most instantly recognisable Aussie performance cars ever, and you’ll go a long way to see one better than Phil’s pristine example, which boasts a hotter camshaft for improved performance but is otherwise original.

This gorgeous 1957 Aston Martin DB2 Mk II saloon (top photo) is one for the James Bond fans. Like 007 himself, it has certainly aged gracefully. The rare Brit classic is one of only 199 produced and is identified from the preceding model by its raised roofline and mini tailfins. Owner Artur Dugdale describes his car’s condition as being “as original as possible”, with only the ignition coil updated on its Bentley-designed 3.0-litre inline six-cylinder engine. The DB2 shone in a quality field that included Jaguar E-Types, Morris Minors and some pristine MG sportscars from various eras. Judges thought the car looked almost as good as it would have when it rolled out of Aston’s factory at Feltham, England, more than six decades prior. The inaugural winner of Motorfest’s new electric vehicle category is this classic ’65 Ford Cortina Mk1, which has been cleverly and sympathetically converted to electric power by owner Tim Harrison. From the outside the “Corry” looks period pukka but under the skin is a modern electric motor and batteries salvaged from a wrecked Tesla, which Tim says makes his sleeper classic a reliable, fast and fun car to drive. In a bonus for classic Ford fans, Tim has kept all the original bits and says the EV conversion is totally reversible. 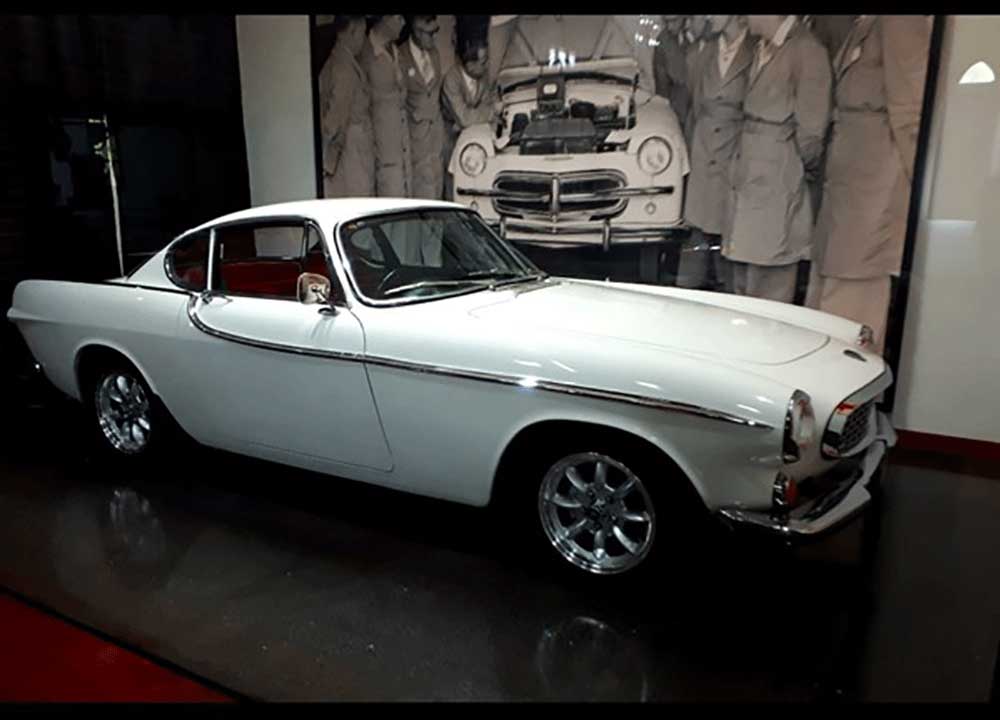 Owner Milton Stevens spent 10 years looking for a great example of the rare Volvo P1800S before snaring this pristine 1965 version of the iconic 2+2 Swedish sports car which he says he enjoys almost every weekend. Cemented in popular culture by Roger Moore in the ’60s TV series The Saint, the P1800S boasts what is arguably the most distinctive Volvo styling of all time. Judges loved the car’s clean bodywork, quality paint job, unmolested lines and period-spec globe alloy wheels. 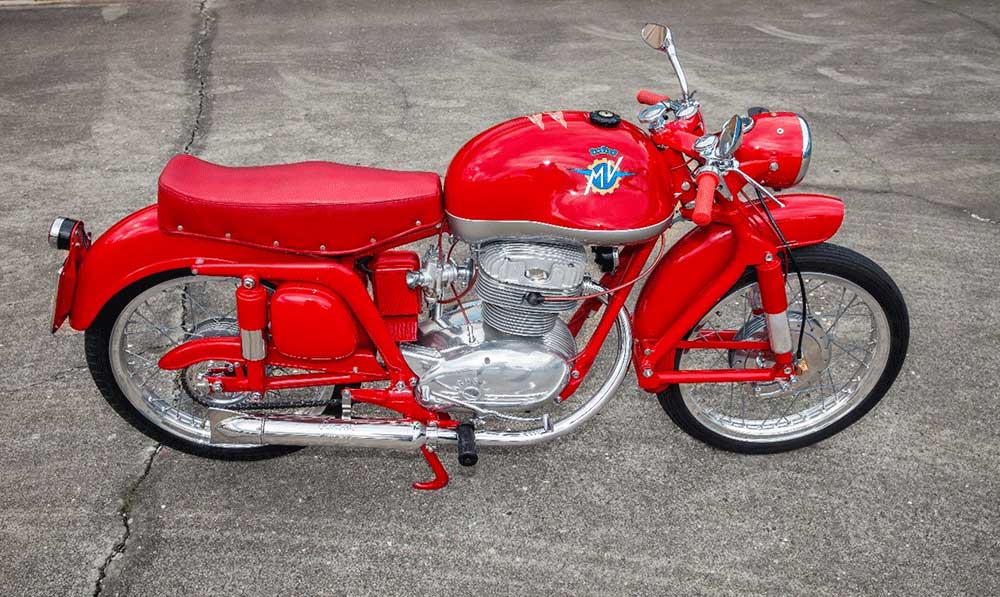 Back in 1954 if you were rounded up on the road by a rowdy red streak that looked like a two-wheeled flying saucer, chances are it was an MV Augusta 175CSS like this beauty. Owner Gaven Dall'Osto’s 1954 Super Sport is a very rare machine and one of only 500 built in its Italian home market. Nicknamed the “Disco Volante”, or “Flying Saucer” because of its unusual tank shape with generous 14-litre capacity, the classic sporty MV features an overhead cam engine, Dellorto carburetor and unusual Earles fork front suspension. Judges thought it a wonderful example of one of the most distinctive and beautifully styled motorcycles of its era. Looking like something straight out of the era that brought us rock ‘n’ roll, slick-back hair and rolled-up Levis, comes Ian McParlane’s customised 1946 Oldsmobile Panel Van. Originally assembled as a hearse from a four-door sedan body by GM Australia, Ian’s customised Olds features a body that’s been shortened, lowered, cut and dropped onto a HQ Holden chassis. Under the bulbous bonnet, with its wild flaming paint job, is an LS1 V8 sourced from a Corvette, with other mod-cons including air-conditioning and a modern auto transmission. The rarest and most unusual entry in this year’s Motorfest is Gavin Mutton’s circa 1909 Economy Motor Buggy, which he believes to be the only known survivor of this model. If the high-wheeler, single-seat runabout looks a lot like a buggy, that’s because it was designed to be either horse-drawn or self-propelled. In addition to a whip holder, it features a horse-drawn turntable chassis and a two-cylinder, 12-horsepower engine. Records show that Model C production in Fort Wayne, Indiana, was cut short due to the Economy motor company refusing to pay a design patent royalty and subsequently moving production to Illinois. The move didn’t save Economy from litigation, though, and Gavin says his rare survivor was dispatched from the Jolliet, Illinois, factory just before the company collapsed. 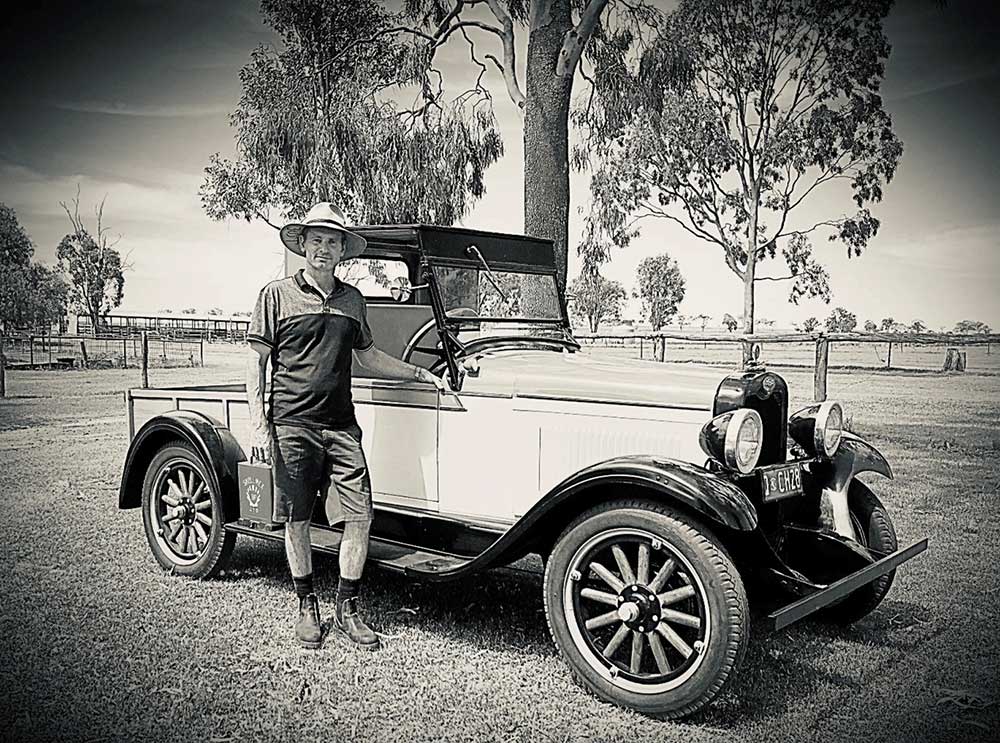 Owner Baden Pearse has especially fond childhood memories of his 1928 Chevrolet National Series AB 1/2 Ton Truck, which he drove to catch the school bus each weekday as a 10-year-old. Baden says the now immaculately restored Chev has its original drivetrain but a new body and all Tasmanian Oak timber work. Judges loved the truck and the way it is displayed in the black and white photograph.