Isuzu MU-X to the Max 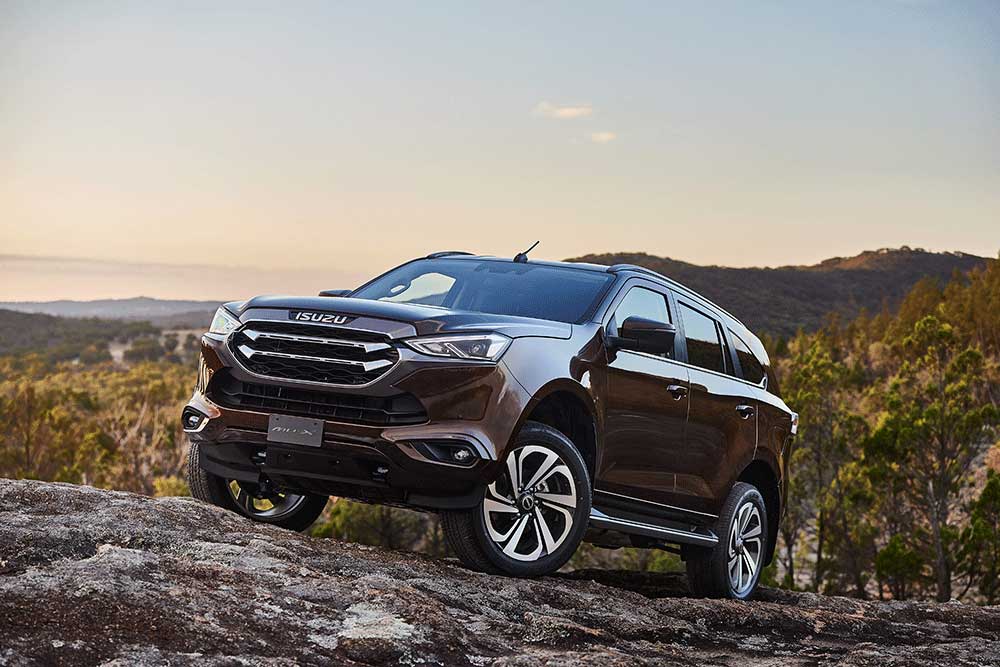 The of Isuzu's long-awaited third-generation D-Max Ute in August 2020 helped propelled the Japanese workhorse into fourth position on the Australian new vehicle sales in July, narrowly trailing the Toyota Corolla small car and its immediate rivals the Ford Ranger and Toyota HiLux.

Now Isuzu is looking to double down on that success with the much-anticipated release of the seven-seat wagon version of its trusty workhorse.

The Isuzu MU-X is based heavily on existing D-Max underpinnings.

Isuzu said this second-generation model featured a unique Australian specification that's been primarily driven by feedback from what is the largest MU-X market outside of Thailand.

Speaking at the launch, Isuzu Ute Australia (IUA) Managing Director Hiroyasu Sato said that "with the significant importance of Aussie customers we've been able to specify our MU-X to better suit their exact and unique requirements".

Isuzu said the new model delivered improved comfort and space, a range of premium features, and a significant increase in advanced driver assistance and safety technology over its predecessor.

Now, as before, the MU-X range comprises 4x2 and 4x4 models, all with auto transmission as standard.

Buyers can choose from three grades – LS-M, LS-U and top shelf LS-T – in both drive configurations.

With nearly 50% of past MU-X buyers regularly using their vehicles for towing, performance when laden was a major focus for IUA engineers during development of the new MU-X.

This has helped underpin an increase in braked towing capacity to 3.5 tonnes with a 350kg ball load, which represents an increase of 500kg and 50kg respectively on the old model.

Both figures are among the highest in class respectively and, along with its standard fit Trailer Sway Control on all variants, the new MU-X has an on-paper advantage over key rivals like the Ford Everest, Toyota's Prado and Fortuner, and the Mitsubishi Pajero Sport. 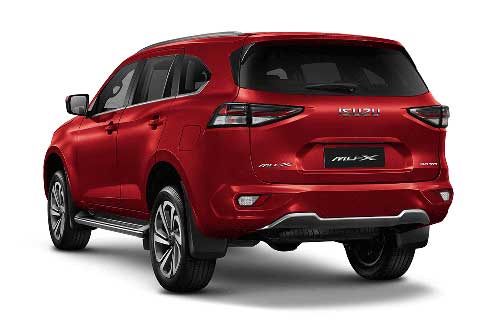 A larger 80-litre fuel tank (+15 litres) should ensure the new model steers clear of servos longer between fills with the extra capacity extending notional vehicle range to about 1000km (based on official combined consumption figures).

That's a handy couple of hundred kilomtres more range than the outgoing model, despite the official consumption on 4x4 models rising marginally from 8.1 to 8.3L/100km, while 4x2 models have seen an equally modest drop in consumption, from 8.1 to 7.9L/100km.

Under its bonnet, the MU-X shares the same substantially re-engineered 3.0-litre turbo-diesel engine as powers the D-Max.

Boasting maximum outputs of 140kW/450Nm, it represents an increase of 10kW and 20Nm over the previous unit.

The engine, code-named 4JJ3-TCX, is an evolution instead of an all-new unit and comes married to a new, faster shifting and more refined six-speed auto.

We're yet to get behind the wheel, but with the engine's muscular 300Nm of torque available from a low 1000rpm, rising to 400Nm from 1,400 rpm through to 3250 rpm, driveability through the rev range should be improved.

Tailpipe emissions should also be lower, thanks to a new maintenance-free lean NOx trap, and H₂S catalytic convertor, which help reduce exhaust nasties including oxides of nitrogen and hydrogen sulphide, making it cleaner than its D-Max sibling.

Off-road performance has also come in for attention, with the inclusion of a new, stronger and more efficient Terrain Command 4x4 drivetrain.

The system features a new transfer case and control systems, beefier driveline components, a standard electromagnetic rear diff lock that can be engaged when in 4-Low at speeds below 8km/h, and improved 2H/4H shift-on-the-fly operation.

There's also a Rough Terrain Mode, which is an off-road-biased extension of the traction control system, aiding driveability in slippery or rough conditions by preventing wheel spin by ensuring drive is proportioned to the wheels with most grip.

Wading depth has also been increased to 800mm, thanks to a revised engine air intake system that uses a labyrinth of sealed airways and repositioning of the differential breather hoses to vent above the new wading depth.

Anyone wanting to plumb in an engine snorkel for even better wading performance will now find that easier thanks to a prefabricated pathway in the internal wheelhouse panel that's unique to the Australian-spec MU-X.

There's plenty of other upgrades to the rest of the MU-X mechanical package, including bigger, more powerful brakes, the addition of an electric park brake with auto-hold and a new electric power steering system. 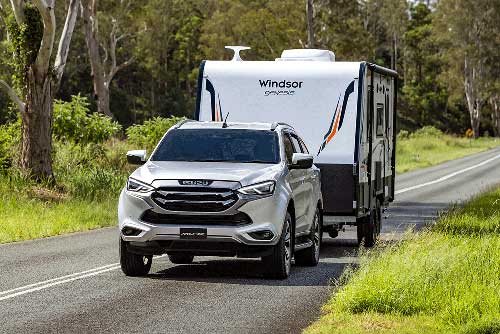 Isuzu claim improvements to handling, ride quality and load-carrying capability, courtesy of redesigned front and rear suspension, along with changes to suspension tuning that include revised spring and stabiliser bar rates.

There should be less potential creaks and groans when you do go bush, thanks to the adoption of a stronger, safer body with double the quantity of high-tensile and ultra-high tensile steel as used in the previous model.

The new body sits atop a chassis that also features extensive use of high-tensile steel, along with wider and taller longitudinal chassis rails, a new rear subframe cradle and an extra lateral crossmember.

The changes add up to a 25% increase in longitudinal and lateral chassis rigidity, according to IUA.

Stylistically, the new MU-X won't be confused with its predecessor, thanks to handsome and contemporary looking sheet metal, a new-look grille with double horizontal accents and chrome-finish ISUZU lettering, flanked by aggressively angular design Bi-LED headlights, with LED DRLs.

Other changes include recessed LED combination lamps at the rear and new alloy wheel designs (17, 18 or 20-inch) housed under the pumped-out bodywork.

Exterior dimensions have changed slightly, with the newcomer longer, wider, and sitting on a stretched wheelbase.

A 10mm increase in ground clearance along with increased approach, departure and ramp-over angles all bode well for enhanced off-road ability.

There's also air-conditioning for all three rows, with roof-mounted controls and directional vents for the middle and rear seats.

Cargo capacity is a mixed story, with Isuzu claiming a class-leading cargo capacity for Ute-based SUVs of 2,138 litres (SAE) when the second and third-row seats are folded away.

That's 24 litres less than the old model, but there's an extra 68 litres of space behind row two when row three is folded, and 311 litres (25 litres extra) when all three rows are in use.

There's a 9.0-inch high-definition infotainment system on mid and high-spec models, while the entry model is equipped with a 7.0-inch display. 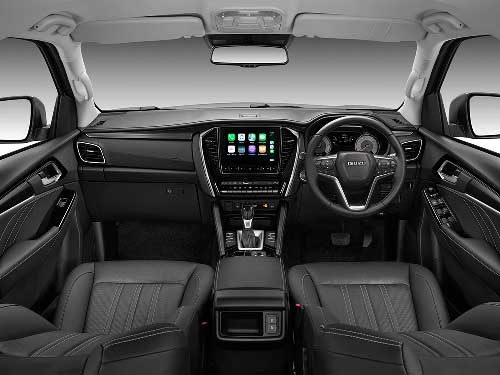 Smartphone mirroring via Android Auto and wireless Apple CarPlay, plus DAB+ radio is standard across the range, as is satellite navigation.

Audio equipment has also been improved, with all models bar the entry-level LS-M variant featuring an eight-speaker sound system, with the LS-M getting four speakers.

Like the new D-Max which raised the bar for standard safety features in the Ute class, the new MU-X is also comprehensively equipped with Isuzu's Intelligent Driver Assistance (IDAS) technologies, eight airbags including a driver's knee airbag and a centre front airbag to help prevent driver and passenger contact during a crash.

Front parking sensors are also fitted to all variants except the base LS-M.

A healthy six-year/150,000km warranty comes standard and servicing costs under the company's capped price program have been reduced by about 12% compared with the old model, according to IUA.

With this new model, Isuzu has taken the MU-X decidedly upmarket, delivering an impressive array of additional features and safety tech, with price increases of between $2700 and $9800 on the previous model, depending on grade.

The new MU-X remains less expensive than a Toyota Prado, and Ford's ute-based large SUV rival, the Everest, but is undercut by the Mitsubishi Pajero Sport and Toyota Fortuner.

Despite this, IUA believes the new MU-X has enough value and appeal to maintain the model's ranking as number one seller in its sub-set of the large SUV market, with an introductory launch offer of $63,990 driveaway for the flagship LS-T 4x4 designed to get the sales tumblers moving.