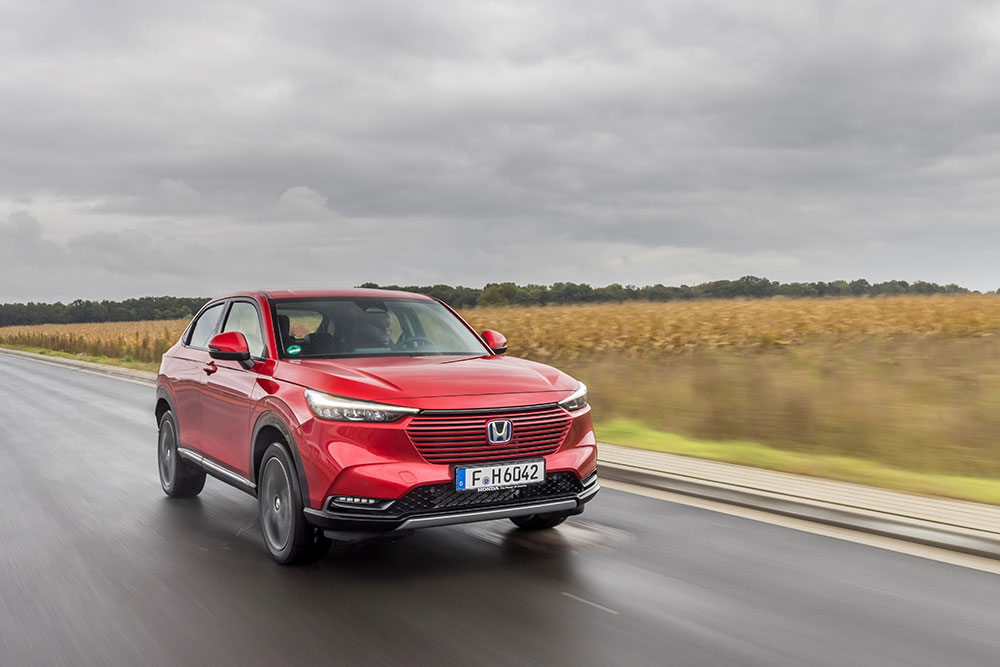 Honda is yet to introduce a fully electric vehicle to the Australian market but its recently launched third-generation HR-V small SUV is its latest model to adopt hybrid electric technology.

The Japanese car maker says the introduction of the hybrid-powered HR-V is the next step in its commitment to introduce hybrid variants of each vehicle line with the arrival of every full model change in Australia.

It’s the first time Honda has made its e:HEV technology available on the HR-V, which also comes with a conventional petrol four-cylinder powertrain.

Both models are priced at a premium in a category dominated by the Chinese MG ZS, which starts from a low $21,990 driveaway, while the second best-selling Mazda CX-30 offers a broader 14-model range with a price spread from $29,390 to $47,390 (MRLP).

Mazda has no hybrid offering its CX-30 range, but MG sells the fully electric MG ZS EV Excite for $46,990 driveaway, indicating the Honda will need to offer an especially compelling blend of quality and features to put a dent in the category sales leaders. 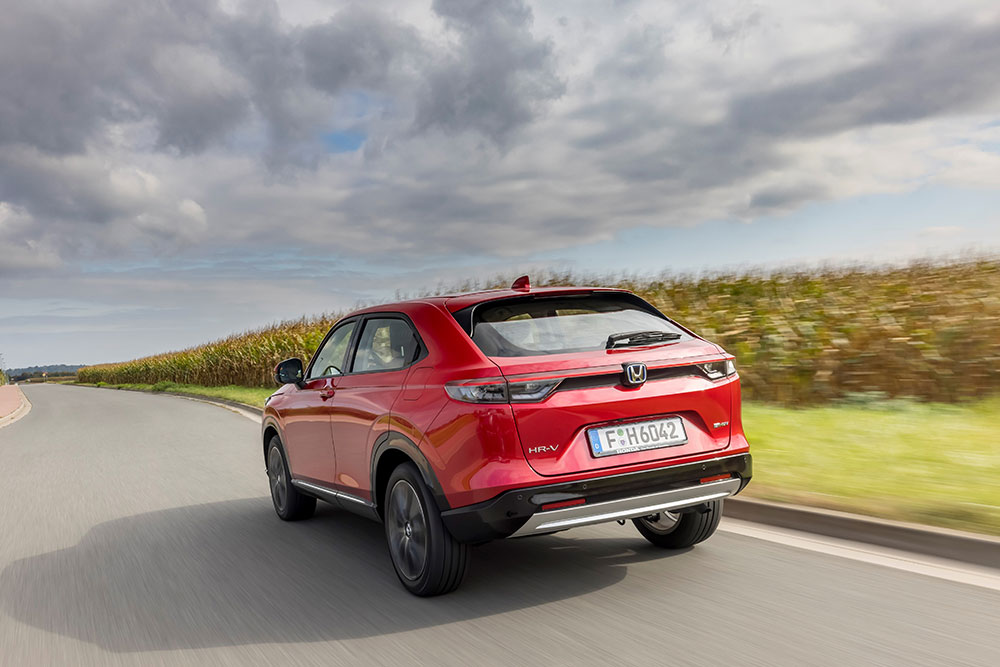 The new HR-V certainly puts its best foot forward in the style stakes, with its contemporary coupe-like SUV body striking an attractive pose.

The new model is also claimed to be exceptionally spacious, given its compact exterior dimensions, with a versatile interior layout that Honda says is more user-oriented and comfortable than ever.

The interior design features a modern, minimalist aesthetic and a premium SUV feel with a simple-to-use 9.0-inch touchscreen offering a host of in-car connectivity features such as smartphone mirroring via wireless Apple CarPlay. 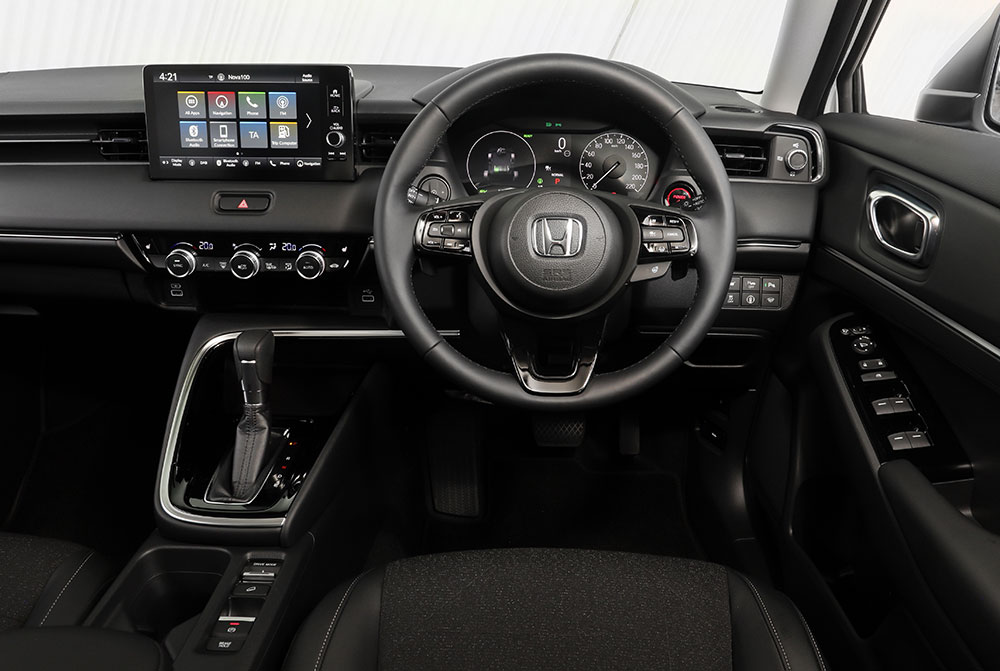 Honda said the fixed-gear transmission created less friction than a conventional power-split system with a planetary gearbox as used by its rivals, ultimately leading to less energy consumption when driving electrically.

The system also enables a higher proportion of accumulated electric drive time when in stop-start urban driving, and the transfer between drive modes – including the start of the engine to generate electric power – is virtually unnoticeable, according to Honda.

Compared with the Honda Jazz hybrid sold elsewhere, the number of cells in the battery has increased by 25%, allowing greater storage and deployment of electric power.

The power control unit (PCU) has also been downsized and integrated into the engine compartment and is water cooled instead of air cooled, for improved heat management.

Other changes include the gear ratio between the electric motor and wheels being lowered to improve the new HR-V’s dynamic performance.

The HR-V’s Electronic Control Unit automatically and constantly, cycles between electric drive, hybrid drive or engine drive depending on which is the most fuel-efficient drive mode at that specific driving situation, says Honda. 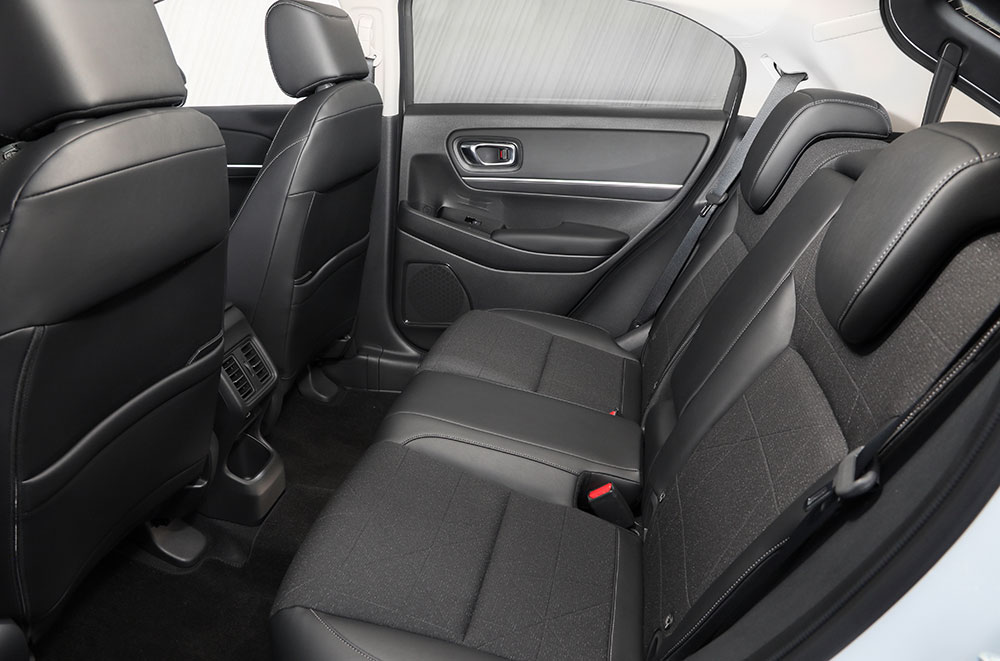 When driving at a constant high speed, such as on the highway, the system operates on engine drive.

If further acceleration is required, such as when overtaking, the car switches to hybrid drive for an additional performance boost.

When in hybrid drive, power from the petrol engine-driven generator can be diverted to recharge the battery, offering additional efficiency benefits.

Drivers can select from three driving modes including ‘Sport’, which sharpens throttle response, ‘Econ’ which adjusts the air conditioning system and throttle response for better fuel efficiency, and ‘Normal’.

They can also select B-range from the transmission, which offers selectable levels of energy recovery when coasting or braking, adjustable via paddles behind the steering wheel.

The hybrid powertrain delivers total outputs of 96kW and 253Nm, which compares with 89kW/145Nm for the internal combustion powered HR-V Vi X. The hybrid’s official fuel consumption rating of 4.3L/100km and CO2 emissions of 98g/km are also thriftier and cleaner than its stablemate’s 5.8L/100km and 133g/km.