We set out to discover if driving an EV from Coolangatta to Cairns on the Queensland Electric Super Highway was really all that super. Electric vehicles (EVs) still represent only a small percentage of new cars sold in Australia, but they are poised to become a much larger part of that mix.

The Queensland Government has added to their appeal, already boosted by record-high fuel prices, by offering a $3,000 rebate to buyers of EVs to the value of $58,000.

However, are EVs something the average Queenslander could contemplate using?

Certainly not without appropriate infrastructure and in this regard, the State Government stole a march on its interstate counterparts by establishing the Queensland Electric Super Highway in partnership with RACQ and energy company Yurika.

This network of EV fast-charging stations, stretching from Coolangatta to Port Douglas and inland from Brisbane to Toowoomba, was completed in February 2018.

The State Government is now extending the network west. Once complete, it will see 18 fast chargers installed on routes from Brisbane to Mount Isa (via Dinosaur Trail locations), Goondiwindi to Emerald and Longreach to Cairns.

We “road tested” the Coolangatta to Cairns stretch of the network with Hyundai’s Kona EV, a compact SUV with a claimed fully electric range of 400km highway or 450km urban.

Hyundai Kona put to the test

The Kona’s impressive credentials encouraged us to tackle the trip, to see if an EV can be trusted to cover such distances efficiently and reliably.

After starting in Coolangatta, our first stop was at the headquarters of Tritium, in the Brisbane suburb of Murrarie, whose 50kWh DC fast chargers we would be using to travel north.

Tritium’s units can recharge the Kona’s 64kWh lithium-ion polymer battery to 90 percent capacity in 60 to 90 minutes, which is about as long as anyone wants to be waiting.

On the Bruce Highway, the Kona impressed with its quietness and performance, cruising effortlessly at 100km/h with strong reserves for overtaking. 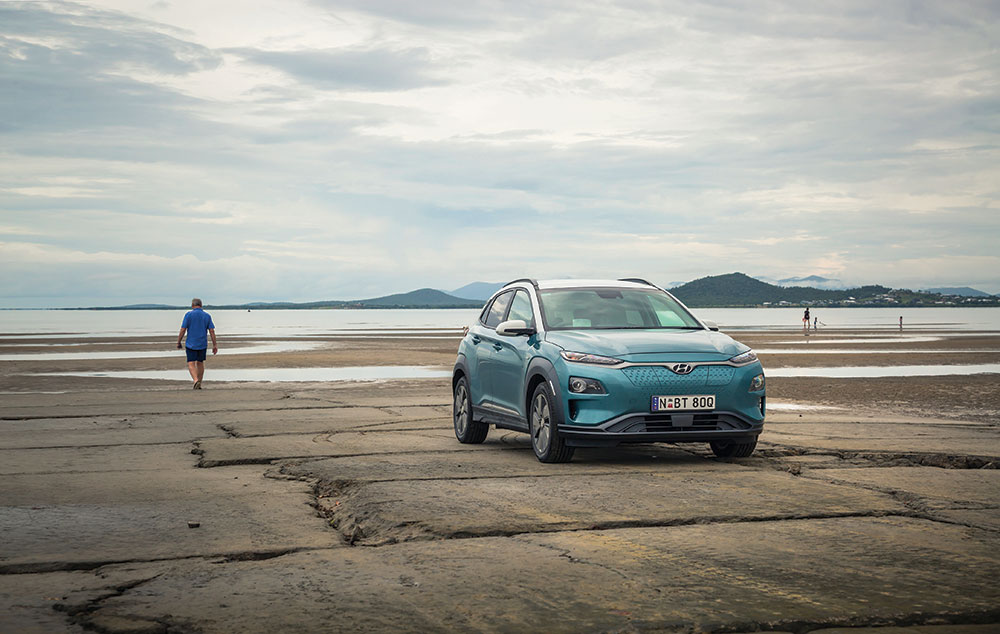 Nevertheless, it was almost dark by the time we entered the quaint, frangipani and mango-tree lined streets of Childers, having bypassed charge points at Cooroy and Maryborough.

We found the town’s Yurika charge point just off the main drag and connected to the car via a small flap on the grille before wandering up town to find some food.

In a “normal” car, we might have topped up in 10 minutes and pushed on but such enforced delays are part of life with an EV.

After coffee and breakfast the next day at the gorgeous heritage-listed Paragon Theatre, we trekked through waving sugar cane and rich red-soil paddocks.

A charge point beckoned at Miriam Vale but, with 223km of available range and only 170km to Rockhampton, we could make it with ease to the city that famously sits astride the Tropic of Capricorn.

It was almost dark when we unplugged there, with enough range to make Mackay, 350km to the north.

The combination of rain, trucks and roos made that seem a folly, so we opted to stop halfway at Marlborough before tackling the 610km to Townsville the next day.

The glittering nightscape of Queensland’s northern capital finally beckoned at 8.30pm, the car’s satnav leading us to a charge point occupied by a distinctly non-electric looking 4x4. We were forced to find another option 20 minutes away. At least the next day dawned bright and clear.

We were soon whizzing up and over the Cardwell Range, past dense rainforest that plunged down to meet the croc-infested mangrove swamps of the Hinchinbrook Channel.

Crocs were on the agenda in nearby Cardwell, too, where a stop at Rob Jesse’s distinctive yellow pie cart is a must.

Cairns was only 140km away, right on the limit of our available range, so we opted to top-up in Tully, famously Australia’s wettest town.

Pushed to the limit

Unfortunately, all that rain seemed to have frizzed the town’s DC charger and we weighed up waiting hours to charge via the slower AC charger or chancing our hand.

We bit the bullet and headed off, the car’s trip computer warning us to turn back.

Switching to Eco+ in the Kona’s drive modes cut the aircon and limited speed to 80km/h as we crept along, the cabin a funk of nerves and sweat in the 34-degree heat. 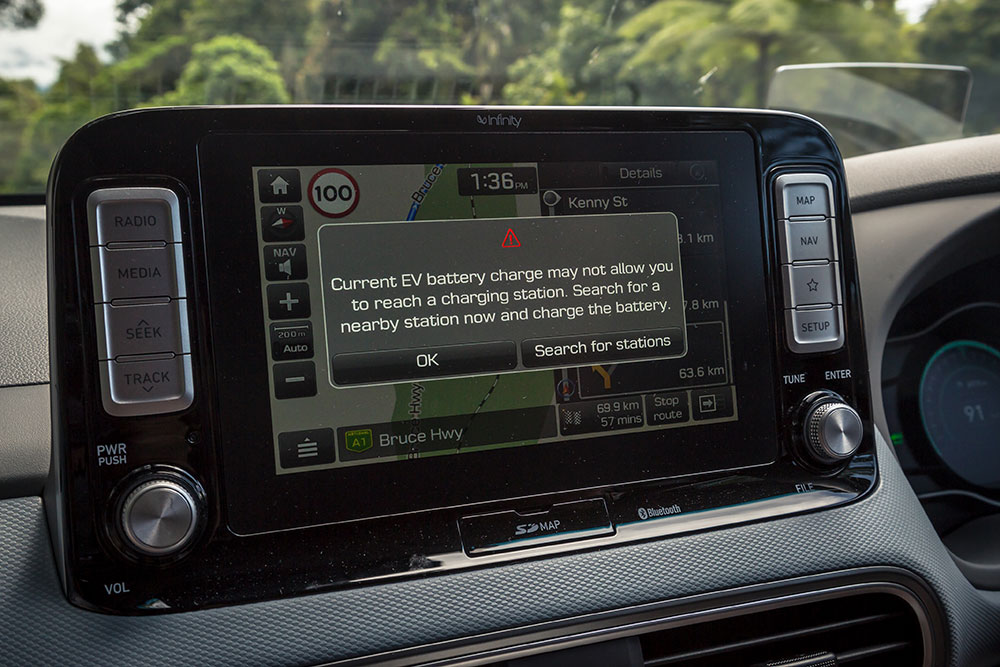 As we edged closer to Cairns, the Hyundai slowly hauled back the deficit via its regenerative braking. We eventually made the charge point with 5% battery and just 15km in reserve.

Mission accomplished, we looked back on a 2122km journey during which we’d recharged six times, for a total of about seven hours.

The Kona is an impressive car and offers a first-rate driving experience, but life with an EV on such a long journey definitely requires some compromises.

Nonetheless, our adventure has shown that such a journey in an EV is perfectly feasible, provided the infrastructure is in place to support it.