RACQ25/06/2018
Holidays
Discover a land lost in time in the Northern Territory. 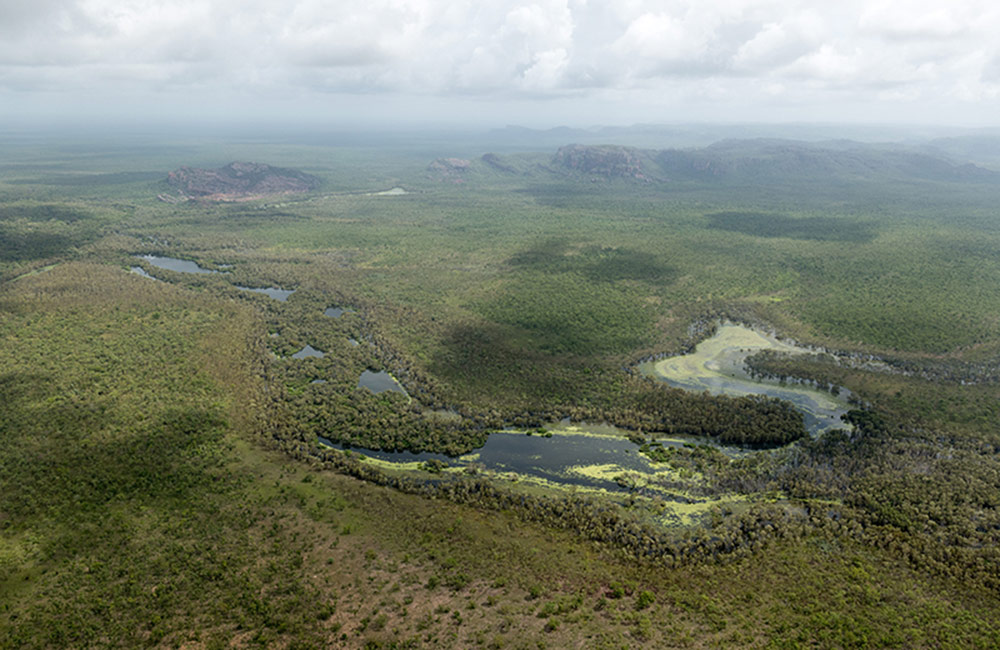 A necklace of emerald-coloured pools fed by cascading waterfalls reveals itself at Edith Falls. After sliding off rocks that resemble solidified toffee, I floated blissfully under a royal blue sky streaked with corellas. 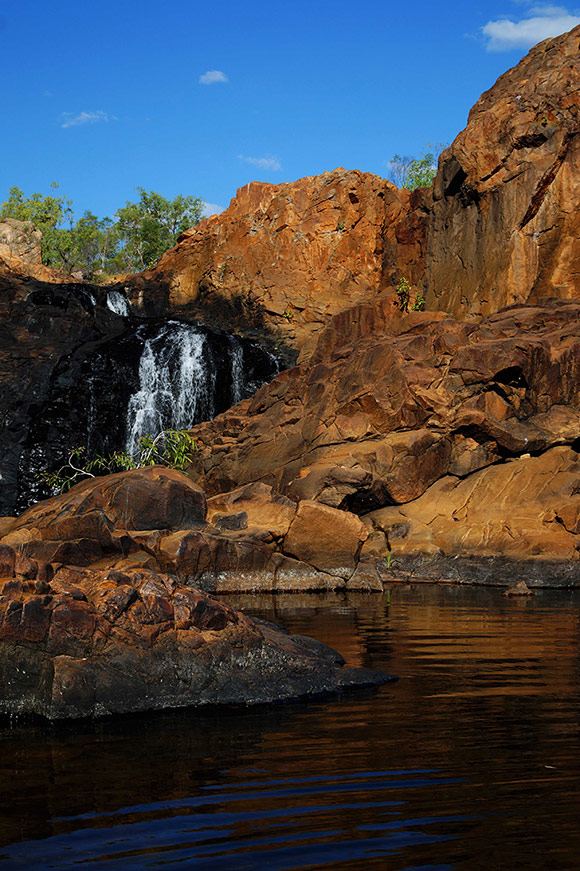 These deep swimming holes scooped out from the ochre desert feel so far from anywhere, yet it’s only a relaxed, pandanus-fringed walk to our car and then a pleasant drive back to our base at Pine Creek.

The primeval scenery of the Northern Territory has long tempted me, however I was daunted by expectations of arduous travel and privation.

Another welcome surprise was that there was so much to see before even getting to Kakadu.

We drove through an empty, resoundingly-red landscape to discover we had the heritage-listed Grove Hill Hotel all to ourselves. Although we’d missed the legendary end-of-month parties, we could wander amongst artefacts harking back to when this enduring social hub sated miners and croc hunters. 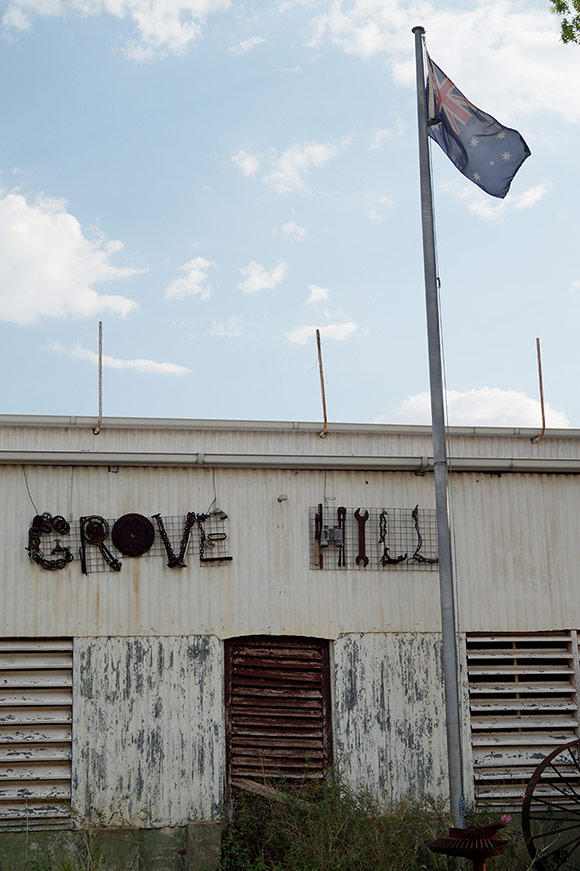 Luckily we’d stocked up on supplies at a supermarket on Darwin’s outskirts, as our very comfortable abode at the Pine Creek Railway Resort had an inviting kitchen, herb garden and a plethora of television channels to watch whilst cooking dinner. Later, kicking back on the Chesterfield, we listened to frogs and geckos.

Inspired by the historic photographs in the Railway Resort’s stylish restaurant, we set off to explore the time-frozen village after a hearty breakfast.

The sole surviving mining settlement from the 1870’s gold rush, picturesque Pine Creek has a somnolent charm and we decided to base ourselves here for a few nights. As we walked along wide roads and admired photogenically-decaying remnants of booms and busts scattered amongst the boab trees, the natter of parrots almost drowned out conversation. 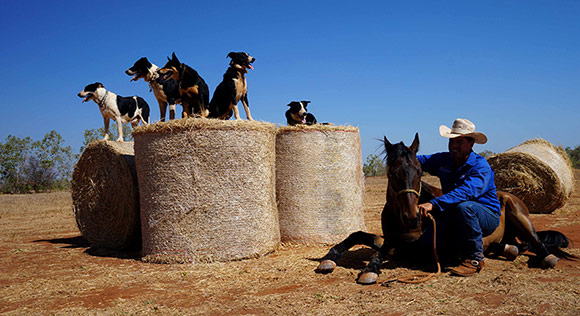 I’d expected Kakadu to be huge and diverse, but the big surprise was the easy access to sites that feel gloriously remote. The Mitsubishi Overlander we’d chosen for its comfortable drive handled the well-maintained roads with aplomb.

Approaching Kakadu National Park, we passed rock arrangements that resembled giant marbles. Maguk – a vast pool enveloped by painted cliffs – was an irresistible stop. Maguk has rock shelves at just the right height for jumping into the cool, gem-green water. An entire day could be spent here swimming and lounging about in the shade, just revelling in the sense of raw nature. It was hard to leave but the walk back to the car, past towering pandanus palms and crystalline creeks, was a pleasant consolation.

Centrally-located Anbinik, a funky, architecturally-acclaimed resort with a tempting pool and lounging area, was our Kakadu base. Lush golden cane palms surrounded our spacious cabin.

From here, a sunset pilgrimage to Aboriginal rock art site Ubirr is a must. Perched high on a rocky outcrop, I watched a splendid evening light show take form: successive layers of tangerine and candy pink spilling over the vast floodplains, moody maroons and indigo glowering over the stone country of Arnhem Land. Nearby was Cahills Crossing, where dozens of crocodiles come out to fish on the incoming tide.

Nourlangie – a stirring collection of rock art viewed by walking under massive boulders – is also situated in this section of Kakadu, as are billabongs that are easy to walk around, such as Anbangbang. 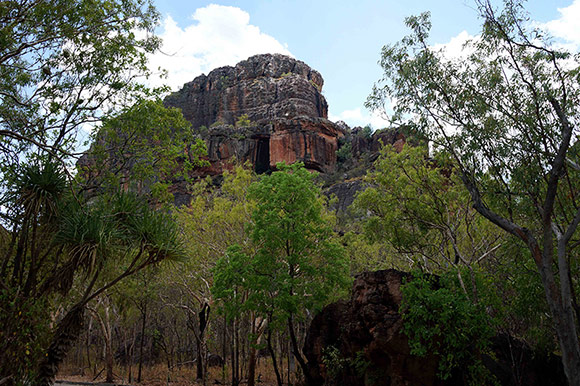 The next morning, we woke early for the sunrise cruise at Yellow Water. Through viscous mist, I heard the flocks of magpie geese before I saw them. They’re everywhere, as were massive crocodiles, hawks and innumerable other birds. 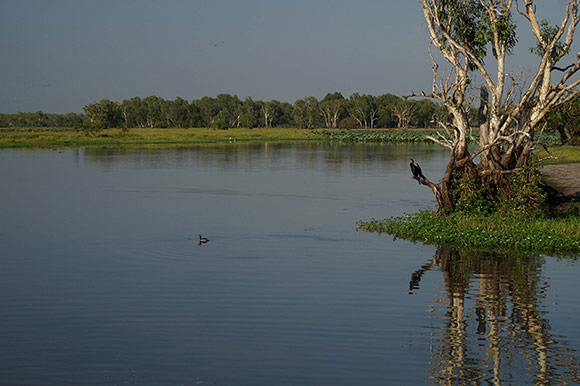 It’s a scene and soundtrack palpably unaltered by time and human meddling, and I returned for the sunset cruise that evening.

In the gilded afternoon light, I was captivated by jabiru daintily dancing amongst the carpet of lotuses, oblivious to the standoff between rival male crocodiles that had everyone else transfixed.

A refreshing option for the heat of the day in this part of the park is the restaurant and pool at nearby Cooinda Lodge.

Driving back to Darwin, the impressive Mamukala wetlands and Fog Dam warrant a cameras-poised stop.

Mindful of the fact that I was driving in a region boasting some of the most magnificent wetlands on the planet, the Corroboree Wetlands Cruise on the Mary River – with its wildlife and incredible sunset – was the perfect encore for a quintessential ‘Territory’ road trip. 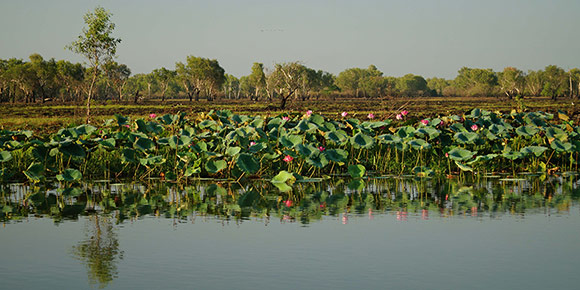