Back to Binna Burra 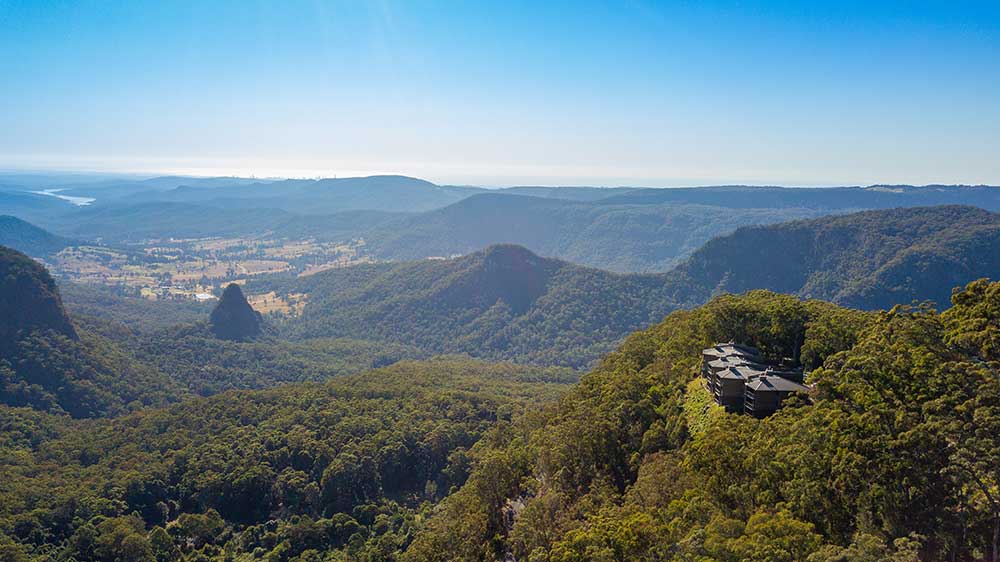 Generations of visitors to Binna Burra Lodge in the Gold Coast hinterland will remember the mob of red-necked pademelons that grazed by twilight each evening on the verdant field outside the historic Groom’s Cottage, the original home of Binna Burra Lodge co-founder Arthur Groom.

But since the bushfires of September 2019, which sadly destroyed the heritage-listed Binna Burra Lodge but spared the cottage, Arthur’s granddaughter Lisa Groom said the pademelons were fewer.

“When Binna Burra’s road was cut off after the fires and there were no visitors onsite for a year, the dingoes and wild dogs became bolder and consequently the pademelon numbers have greatly declined,” Lisa said.

It’s just one example of the ecological shift that followed the fires, affecting the diverse range of flora and fauna that call Lamington National Park and neighbouring Binna Burra home.

But when I arrived at Binna Burra Lodge, after winding my way up the new $30-million-dollar road and feeling the temperature drop seven degrees, I was pleased to see little indication of fire damage in the surrounding rainforest.

Instead, I was welcomed by the call of whip birds and the thrumming of thousands of insects.

After checking in at the teahouse (the original reception and dining room perished along with the lodge’s rustic cabins), I decide to tackle the 1.2km rainforest circuit. 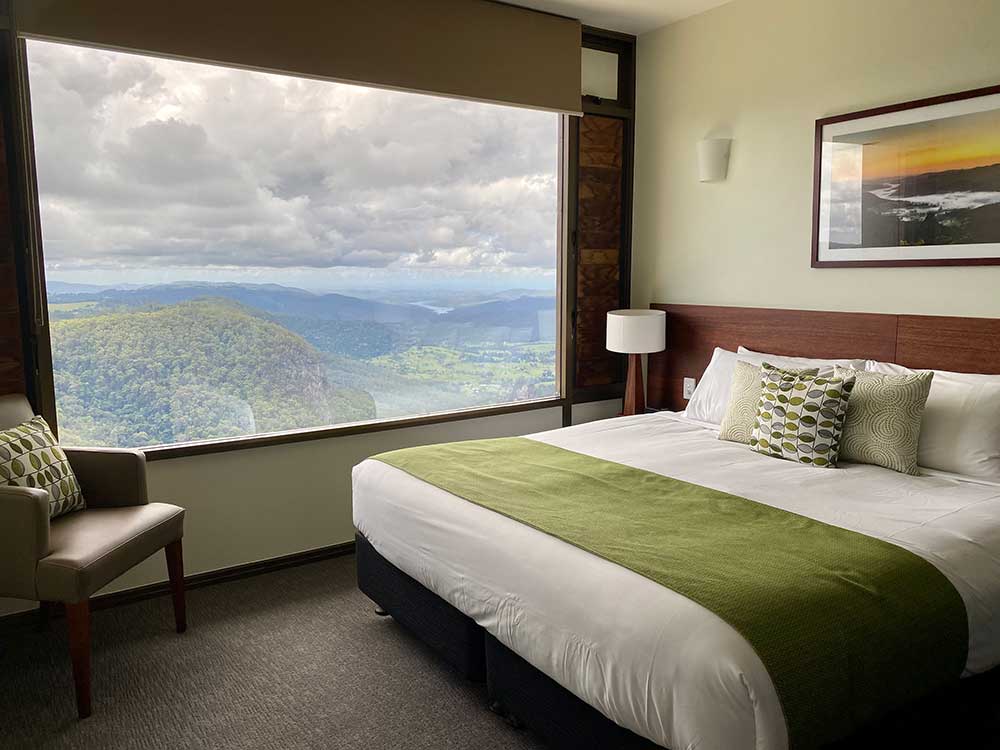 View from a bedroom in Binna Burra Sky Lodge.

Meandering along the path, I was pleased to spot a pademelon feeding quietly among the leaf litter. It seemed the species was already making a comeback.

Next, I made my way to the barn to meet our Binna Burra guide who was tasked with teaching us about the plethora of bush tucker that can be found in the local area, if you know what you’re looking for.

At the conclusion of the tour, we sipped aniseed myrtle tea and munched on homemade damper while taking in the sweeping views over the Coomera and Numinbah valleys.

Back at the barn, the meeting point for tours, is the bushfire gallery – a sobering collection of photos and videos that show the devastation caused by the fire, as well as a timeline of the lodge’s fascinating history.

Founded in 1933 by conservationists Arthur Groom and Romeo Lahey, these visionaries hauled a dismantled boarding house up the mountain by pack horse, which became the lodge’s dining and recreation rooms.

Lisa, who grew up at Binna Burra and now coordinates activities and tours for guests, said when she first visited the site with her father after the fire had razed the lodge and cabins, they were left “reeling”. 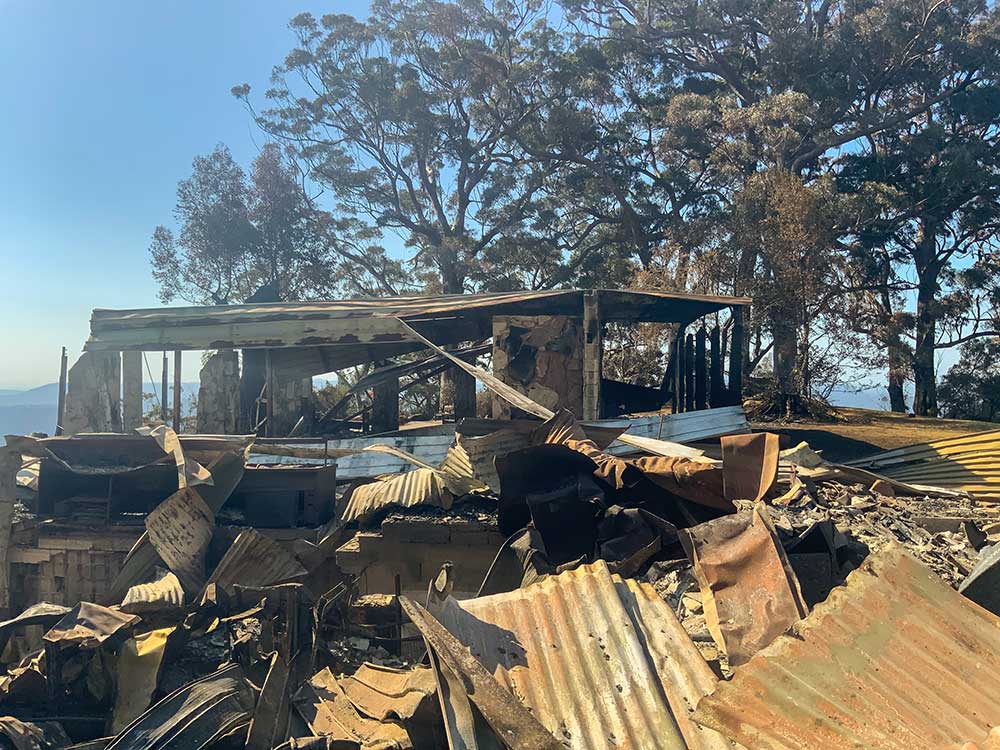 “We felt pretty shabby,” Lisa said. “It was just a big mess of metal and rubble. And then Dad quipped: ‘Well, we’ve always wanted to renovate’.”

The notion of renovating and rebuilding has been a constant topic of discussion among the Binna Burra board of directors who were hopeful of building new accommodation for guests with the support of bushfire recovery grants and shareholder investment.

Until then though, guests can stay at one of the Sky Lodges – a boutique collection of one, two and three-bedroom luxury apartments that survived the blaze thanks to their modern construction which meets rigorous fire safety standards.

Featuring a kitchen, laundry and cosy lounge with a gas fireplace, the highlight of these apartments is undoubtedly the bubbly spa bath overlooking the seemingly endless stretch of mountains, and the large outdoor balcony with views so good that you may never want to leave your apartment.

But there is something worth prising yourself away from the comforts of the Sky Lodges for; namely, the magnificent hiking trails.

It’s said that back in the day, Arthur Groom would set guests to work peeling potatoes in the kitchen if they didn’t get out exploring the surrounding rainforest, such was his passion for showcasing the beauty of the area.

Led by another guide, we walked the track leading to the Koolanbilba Lookout, a clearing which offered a stunning vista in a different direction, taking in natural landmarks like the aptly named Egg Rock. 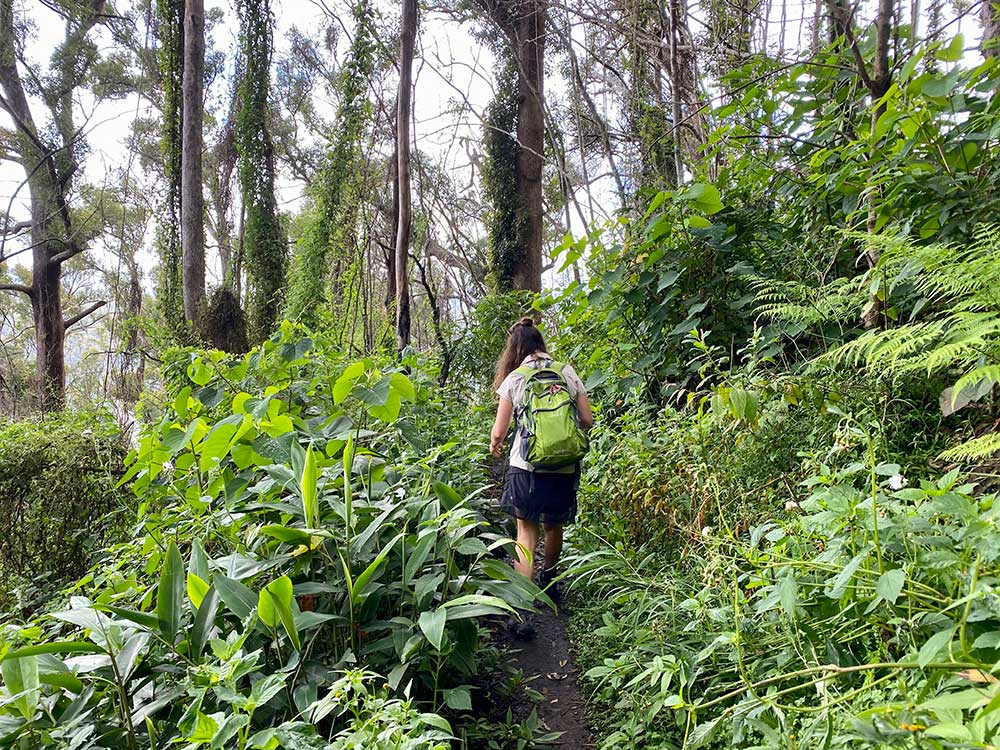 My guide explained that because the rainforest canopy had opened up after the fires, pioneer species, like the native kangaroo apple, had germinated in the understorey, growing rapidly in the changed conditions and at times overhanging the track.

If all that bushwalking leaves you a little thirsty, as it did me, Groom’s Cottage has been transformed into a “Bushwalkers Bar”, serving local wine and beer as well as a small selection of light meals.

If you’re after something heartier, the licensed teahouse is open for breakfast, dinner and everything in between.

Next to the teahouse you will find the campsite and permanent safari tents, nestled into the hillside and all boasting magnificent views for an affordable price.

With the sun setting and sipping on a glass of Groom Pinot Gris at the teahouse, I watched a pair of crimson rosellas, the bird featured in Binna Burra’s logo, take flight.

Watching them soar, I realised it will take a lot more than a wildfire to quash the spirit of Binna Burra.

The writer was a guest of Binna Burra Lodge.