Up, up and away with Gold Coast hinterland balloon flight

Ray Andersen03/11/2021
Holidays
A balloon flight over the Gold Coast hinterland proved to be a surprisingly calming experience. 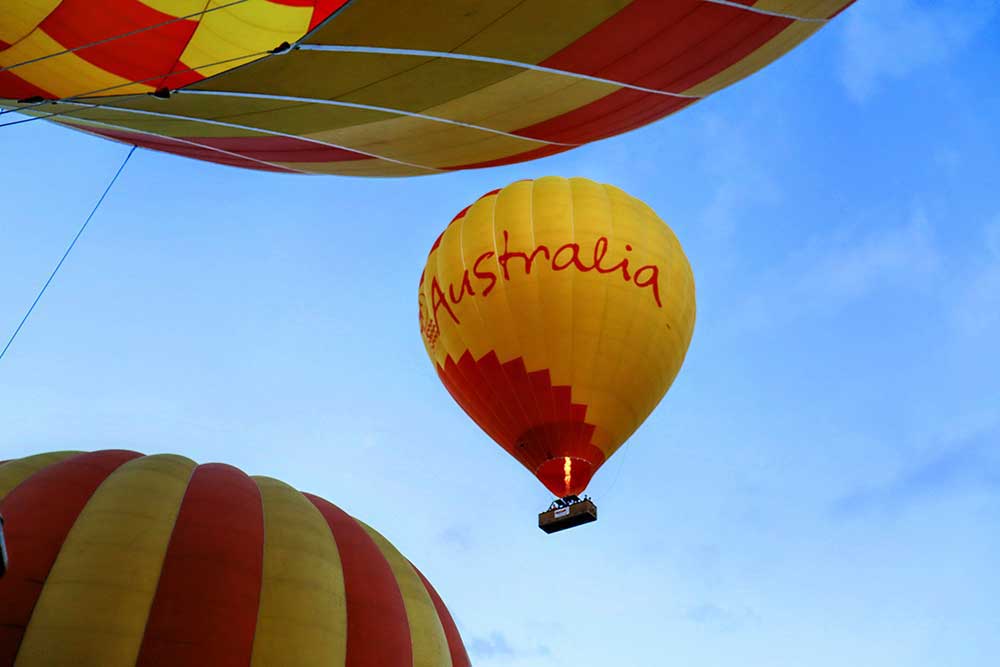 I knew deciding to take a hot air balloon ride meant having to face one of my fears.

My balloon was scheduled to launch from an undisclosed location about 5.30am, which meant I had to be at the bus pick-up point in Canungra by 4.30am.

This required setting an alarm for 3.45am. Yes, truly terrifying!

I woke before the alarm sounded and I had plenty of time to make the 15-minute drive from my accommodation to downtown Canungra.

After a short wait for my bus to arrive, the trip to our chosen launch site at Tabragalba, east of Beaudesert, took about 40 minutes.

My balloon, which bus driver Chuck proudly told us was the biggest flying in Australia, was one of four that launched from Tabragalba that morning and among seven I would later count in the skies over Beaudesert.

After getting off the bus, Chuck directed myself and the 19 other passengers on my Hot Air Balloon Gold Coast flight to stand in a group while we waited for all four balloons to be inflated.

Once our balloon was mostly filled, we were asked to complete what turned out to be hardest part of the adventure – getting inside the basket.

There is no delicate way to do this. Balloon being filled with hot air before take-off.

You have to put your feet in two holes on the side of the 1.3m basket and climb in as best you can.

Chuck was on hand to offer as much assistance as he could.

Once everyone was safely inside, our pilot Frank ran through some basic safety information (no high-heel shoes, no knives or sharp objects etc) and the all-important details on how we would be landing.

We were told if the basket did topple onto its side, passengers had to make sure they stayed in the basket and were not tossed out.

Advice I was happy to comply with.

On landing we had to squat down with our backs against one side of the basket while holding onto handles on the other side.

We were also told we would be landing “like a kangaroo”.

This meant the basket would not come to a dead stop upon touching down but would bounce a couple of times before coming to rest, hopefully still in a vertical position.

After posing for pre-launch photos taken by Chuck, we were ready to go.

Lifting off was a very calm, almost soothing experience. Balloons taking off from Tabragalba.

One moment we were on the ground, the next it was slowly disappearing below us as Frank worked the propane gas-fired burner to take us higher and begin our slow drift west.

Our path took us over Beaudesert before, as Frank explained, a flow of air from the hills to our south put us on a more northerly course.

Our balloon steadily ascended to about 4000 feet (1220m) and it was at this height I felt the first stirrings of trepidation knowing there was only the bottom of our wicker basket between me and the ground way, way below.

We did not stay long at that height, however, as Frank soon began the all-important task of finding us somewhere to land.

Frank had a plan to land in a farm paddock in Veresdale, north of Beaudesert.

He said not all the local landowners were fond of having balloons making unannounced early-morning landings in their properties, so there were some that were out of bounds.

Before long Frank was zeroing in on our designated landing zone, the aforementioned paddock which was empty except for another balloon which landed about 100m away minutes earlier.

We took our landing positions and anxiously waited for that first bump of our basket touching down.

After a couple of small kangaroo hops, we came to rest in an upright position. Waiting for us in the paddock was Chuck and another of the ground crew.

Frank had been communicating with them during the flight, allowing them to get to the landing zone ahead of us.

The balloon was quickly secured by the ground crew and we were able to get out of the basket, again in an ungainly fashion, with Chuck on hand to help.

Frank was part pilot and part tour guide, pointing out local landmarks and telling us some of the region’s history.

He said the flight went pretty much as planned although we had followed an “L” course when he had planned it to be more of a “Z” shape.

He said he went from Plan A to Plan B and back to Plan A as conditions changed.

We covered about 15km in total, or about 10km as the crow flies, during the hour-long flight.

After helping pack up the balloon, it was back on the bus and off to O’Reilly’s Canungra Valley Vineyards for a cooked breakfast and glass of champagne – the perfect way to cap off a memorable morning.

Writer was a guest of Destination Gold Coast

RACQ members can save up to 40% off balloon experiences