Explore a raw islands paradise that boasts a storied past. “Look straight down, the wreck is right under the wing’s tip.”

With my face flattened against the window usually reserved for the co-pilot of an eight-seater lightweight plane, I scan the swell slapping against Morning Reef in the Houtman Abrolhos Islands.

It’s a needle-in-a-haystack search. We circle again, our massive bird-like wings turning into a headwind.

“Where those flock of birds are!” David Butt, the pilot, points excitedly as we lean into a 45-degree turn.

It is unmistakable. A wound oozing a luminous icepack-like gel, where the infamous ship Batavia ran aground early morning, 4 June 1629. What occurred afterwards darkened Australia’s history books with a notorious mass murder. The lure of silver guilders and other precious antiquities on board was too hard to ignore in the eyes of skipper Adrian Jacobsz.

It was a lethal pairing and together they plotted a mutiny against the ship’s commander Francisco Pelsaert.

However, gale-force winds and lack of navigational equipment caused havoc when the Batavia smashed into the rocks and the mapped mutiny never unfolded. What happened after, though, was far more horrific. Cornelisz, who was left behind while Pelsaert and his crew searched for water, began a reign of terror, brutally slaughtering 125 men, women and children on nearby Beacon Island. It did not end well for Cornelisz, as he was hung, drawn and quartered in public while Jacobsz was captured and tortured for negligence.

As David levels the plane’s wings, it’s hard to imagine the dark bloodied past as we fly over an archipelago of aquamarine puzzle-like pieces. Declared a national park in July 2019, the Abrolhos (as shortened by locals) lays 60km off the Geraldton coast, Western Australia.

Three groups span 122 idyllic islands: the Pelsaert Group, Wallabi Group and Easter Group, where Rat Island is located and is our first port of call. The short ruler lookalike runway is surprisingly smooth as we come into land, dispersing hundreds of sooty terns on touchdown. “It’s Tinder for birds,” David muses as I climb down with two other guests.

“The terns arrive, find a date, procreate and return every year.” As one of the world’s most important seabird breeding sites, hundreds of thousands of pairs have been recorded here. Thirty-five species have marked the islands as their breeding ground.

Apart from the terns filling the sky, it’s just the four of us strolling through low-lying shrubs.

The fishers who live here left for the mainland only days ago as an unseasonal October storm ravaged the islands. Still, it’s easy to understand the freedom the islands’ isolation affords away from the restraints of a routinal society.

The rugged beauty is a definite drawcard. There are no palm trees edging boutique hotels, no beauty spas offering pampering menus – just plaques detailing the islands’ ecology in the bush.

We wander past a group of multi-coloured huts that could double as Antarctic shacks and down to the water’s edge where boardwalks branch out like fishermen’s weathered fingers. We find a sea lion pup suckling on its sunbathing mother, stopping briefly to look up, curious to our presence. Under the balmy sun, I imagine staying longer, months maybe, to experience the city-to-coral-coast lifestyle. We next touch down on uninhabited East Wallabi Island where, again, we have the island to ourselves.

A short walk to Turtle Bay, a popular stretch of beach, sees us gathering handfuls of keepsake shells before reaching a raised platform, our posy for morning tea and lunch.

Close by, bush tracks find us tracking wildlife where we spot an inquisitive tammar wallaby peeking out from the undergrowth.

“The fauna’s so diverse here – it’s often referred to as the Galapagos of Australia,” David tells us as a dwarf bearded dragon darts across our pathway heading for the thicket. Further on, David points to a fallen osprey’s nest.

“Cyclone Seroja knocked it flat to the ground in April this year,” he says. “It was about 3m high, took the ospreys around 10 years to build.” Twisted twigs, ocean debris including toothbrushes, thongs, and even a table-tennis bat lay scattered around the dishevelled base.

It’s another reminder of how exposed the islands are to seasonal Indian Ocean storms. Before we leave, I attempt to squeeze a quick snorkel in, but the recent storm has rendered the water murky, and visibility is low. 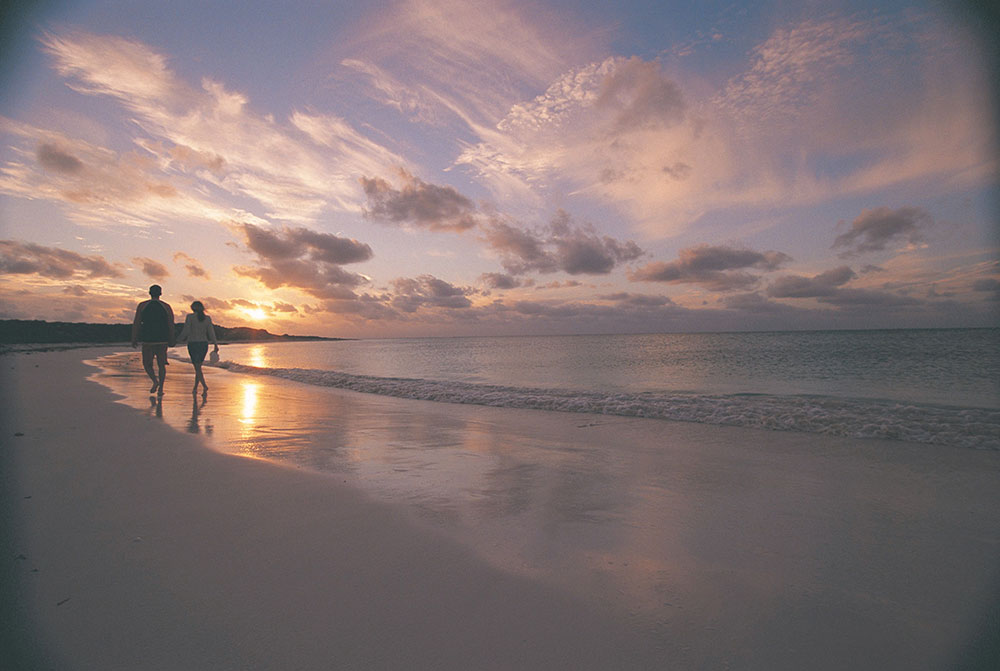 “You have to come back,” David suggests. “The sea life is richer than the Great Barrier Reef – there’s a stunning oceanic aquarium teaming with healthy coral around the islands.”

Heading back to the mainland, we fly over Post Office Island where fishers once collected their mail, then on to Little and Big Pigeon Islands, where jetties fan out into deeper waters.

We follow Long Island, which snakes like lace through the Abrolhos, its rough hems highlighted by aqua-emerald shades the colour of opals.

As we circle Morning Reef one last time, the Batavia’s “wound” is all aglow like a beacon to those who lost their lives.

It’s also a ribbon of light, pointing to the stark, striking seascape that spans across the unparalleled beauty that is the Abrolhos.