Discover dinosaurs in the Queensland outback

Travel through the outback and learn about giants of the land, sea and air. 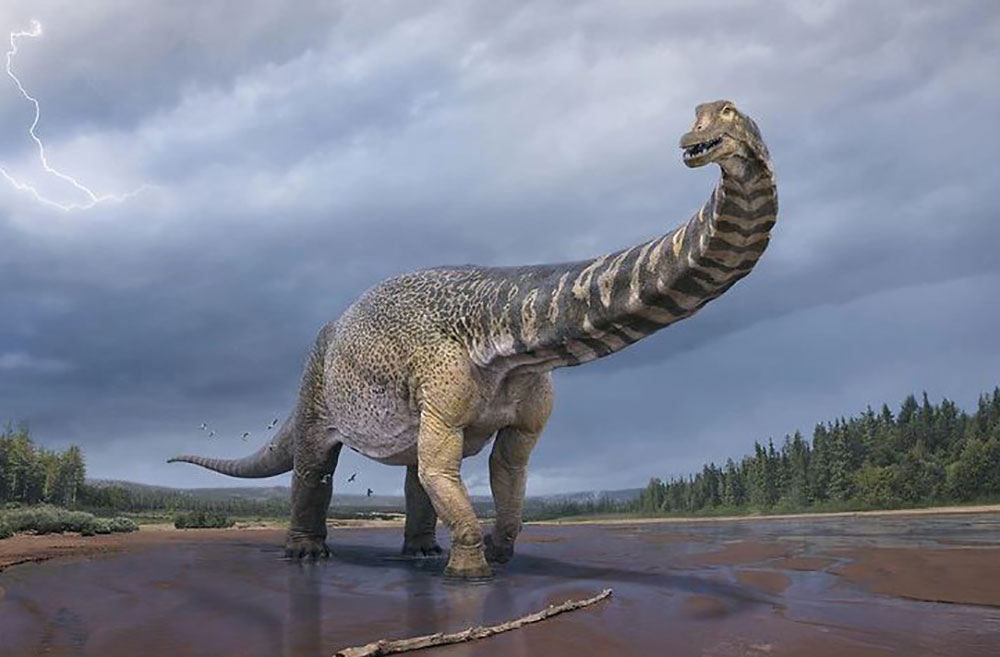 Visitors to outback Queensland can step back 100 million years to experience a time of prehistoric giants.

An inland sea once covered vast swathes of western Queensland and stretched to northern New South Wales and into South Australia and the Northern Territory.

The remains of the marine animals that filled that sea and dinosaurs that roamed the land and pterosaurs that prowled the skies continue to be unearthed.

Many of those fossils are on public display in museums and tourist attractions across the outback.

“To get fossils of dinosaurs and pterosaurs, you need sedimentary rocks, like sandstones, shales and limestones, and they need to be of the right age, so from the age of dinosaurs,” Dr Salisbury said.

“Since that inland sea filled up with these sediments, nothing else has happened out there except for erosion.

“So we’re finding the remnants of the animals and plants that existed in those areas 100 million years ago.

“That’s what makes outback Queensland unique and explains why all these fossils are there.”

Dinosaur tourism is booming, with huge numbers of people visiting attractions across the outback to see fossils, life-sized dinosaur replicas and even search for their own prehistoric discovery.

“We are getting so many people saying we were going to go on a cruise, or to Bali or Japan or somewhere, but because of COVID, we couldn’t go, so we bought a caravan and we’re looking at our own backyard,” Mr Rackham said.

The State Government has announced it will spend $500,000 over the next three years on a roadmap to grow dinosaur tourism.

“Outback Queensland is one of the best places in the world to have a dinosaur experience,” Ms Palaszczuk said.

“Some of Australia’s most significant dinosaur discoveries have been made in Queensland in recent years.

“We want to capitalise on demand for unique tourism experiences in the future – that’s what our roadmap will help us achieve.

“We’ll work with the tourism industry to develop a strategy to promote the outback as the world’s leading destination for dinosaur tourism.”

You can learn more about Queensland’s dinosaurs by visiting these attractions:

The Riversleigh fossil deposits are among the world’s richest and most extensive. While not from the dinosaur era, the fossils found at this site range from 26 million to 30,000 years old and are the ancestors of most of Australia’s modern-day animal population. You can skip the museums and head straight to where nature and history come together at the Riversleigh World Heritage Site. In Mount Isa, the Riversleigh Fossil Discovery Centre showcases Riversleigh’s most unique fossil finds via innovative interactive displays. 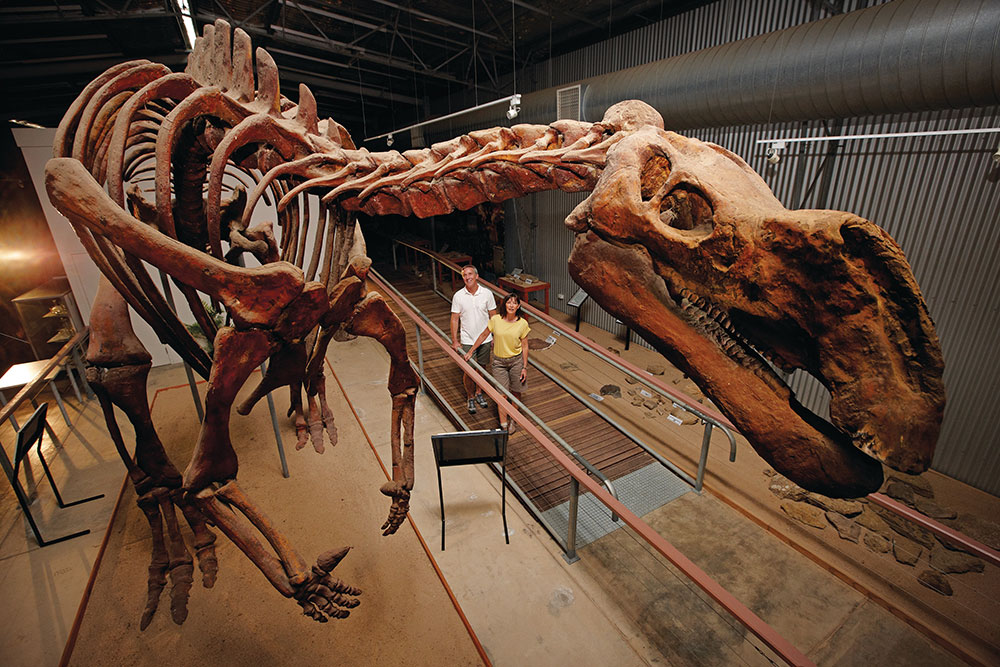 Visit Hughenden and become friends with Hughie (above), a 7m statue cast from the bones of a muttaburrasaurus at the Flinders Discovery Centre. You can also explore an impressive fossil collection interactive displays and discover dinosaur bones found in the area from 1865 to modern-day digs. This dinosaur town is a non-negotiable for any budding palaeontologist — you might even make a discovery. Once part of Australia’s inland sea, Richmond takes you “underwater” to showcase world-class marine fossil discoveries. Get your hands dirty and explore the extensive fossil collection at the Kronosaurus Korner museum or apply for a permit to dig for your own dinosaur bones at the fossil hunting site. At the dinosaur capital of Australia, you can satisfy your cravings for a fossil adventure at the Australian Age of Dinosaurs. Home to the world’s most extensive collection of Australian dinosaur fossils, Winton invites you to walk through Dinosaur Canyon or don a scientist’s coat and help prepare real dinosaur bones in the laboratory.

Lark Quarry is a 90-minute drive from Winton, where you can experience Jurassic Park levels of history at the 3300 giant stone footprints. At Lark Quarry Conservation Park, you will learn about the world’s only recorded evidence of a dinosaur stampede and imagine the scene of hundreds of dinosaurs running across the landscape. Tours depart Winton daily. 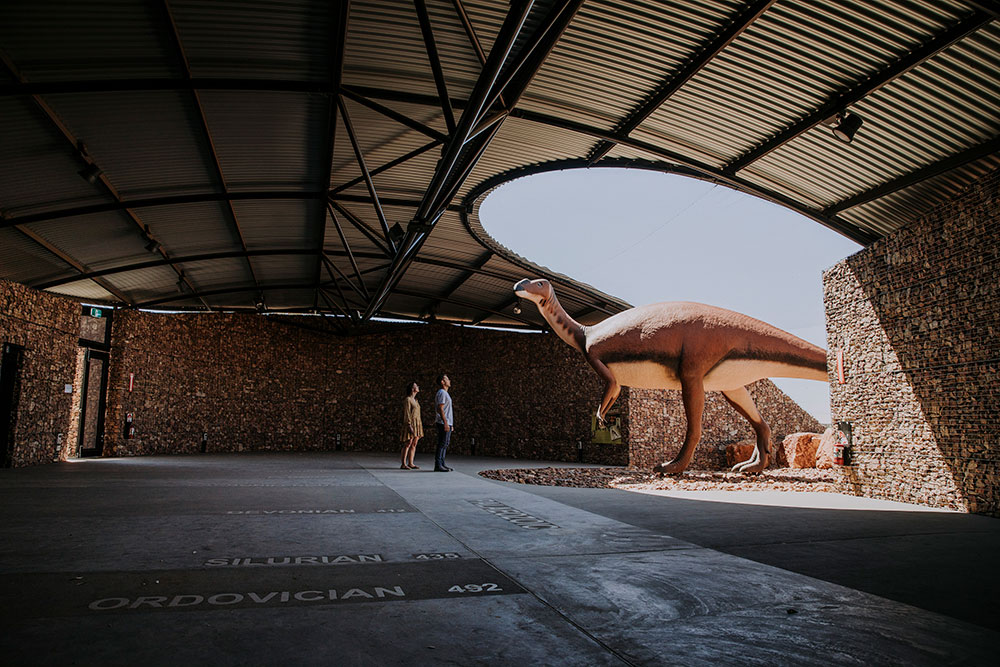 A fossilised skeleton of a giant plant-eating dinosaur was found at Muttaburra in 1963 by local grazier Doug Langdon for whom it was named Muttaburrasaurus langdoni. At the time, it was the most complete dinosaur fossil found in Australia. A muttaburrasaurus replica is the star attraction at the Muttaburrasaurus Interpretation Centre, which opened in 2021. The centre also houses numerous stories and displays associated with its discovery.

Driving to the south of outback Queensland, you can visit the Outer Barcoo Interpretation Centre and marvel at the life-sized model of an Isisfordia duncani, an ancient ancestor of the crocodile. Don’t miss the chance to see the bulldog fish, an ancient marine animal that swam in the region 100 million years ago.

Your trip to outback Queensland is incomplete without visiting “Cooper” (see top image), Australia’s largest dinosaur, at Eromanga Natural History Museum. Meet the friendly giant dinosaur making headlines and enjoy exhibits of some of the world’s largest megafauna and microfauna.