Mark Hinchliffe22/10/2021
Car Reviews and Advisory
Strong-selling Chinese brand steps out of the scooter and learner market and onto the gravel with this bigger capacity 700CL-X Heritage “naked” bike. 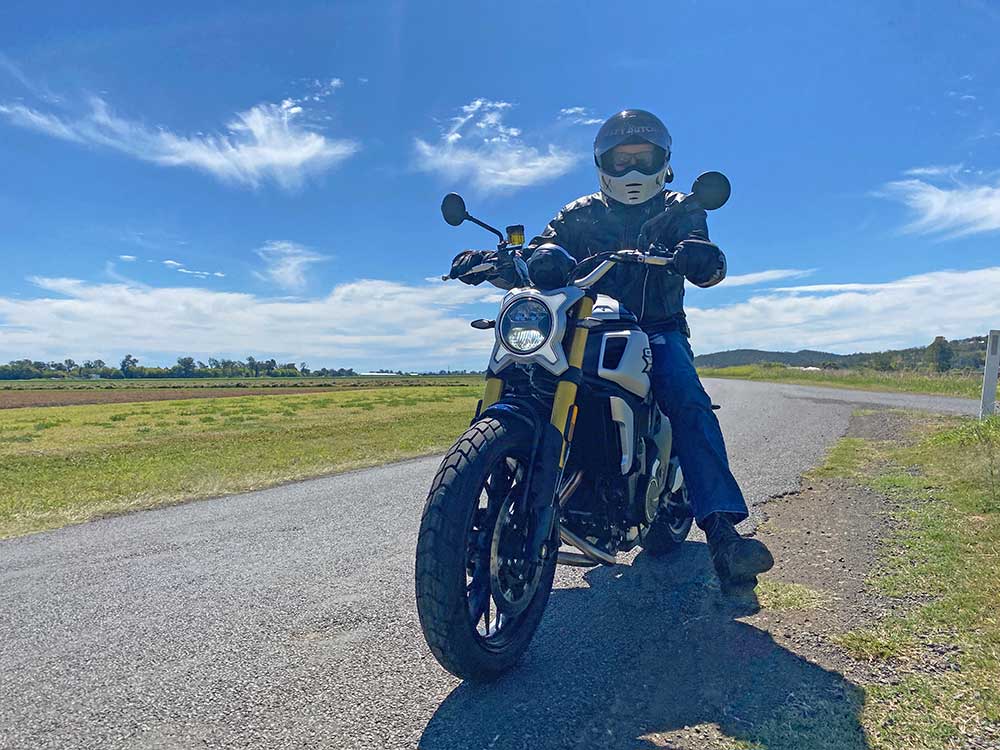 Chinese motorcycle manufacturer CFMOTO has been steadily making inroads into the Australian market over the past decade with its learner motorcycles and all-terrain vehicles.

The brand’s sales figures are hard to track because its Australian importer Mojo Motorcycles is one of the growing number of companies no longer members of the Federal Chamber of Automotive Industries (FCAI), meaning CFMOTO sales aren’t included in national statistics.

However, when the brand’s figures were last tracked, CFMOTO had snuck into the top 10 list, which is no small feat for a still young brand. What makes it even more impressive is the fact it was achieved without CFMOTO having any scooters or motorcycles with an engine capacity of more than 650cc. In other words, no non-learner models.

That changed with the recent arrival of the 700CL-X range, CFMOTO’s first non-learner motorcycles. Given the brand’s swift ascent up the sales charts this new model, and a forthcoming 800cc bike due next year, will likely have many industry rivals nervously monitoring their own sales performance. The brand has more arrows in its quiver, too, with a Heritage naked bike and cafe racer due later this year, and an Adventure all-roader in 2022.

As our recent test of the 700CL-X Heritage revealed, rivals have good reason to be nervous, with the handsome and well-appointed machine landing with an impressively low $9490 ride away price tag. The well specified 700CL-X wears the same Pirelli MT60RS “scrambler” tyres you’ll find on rival Ducati and Triumph models, with other standard features including cruise control, a USB charging port under the seat, and full LED lighting – including a headlight that adapts illumination to ambient conditions. 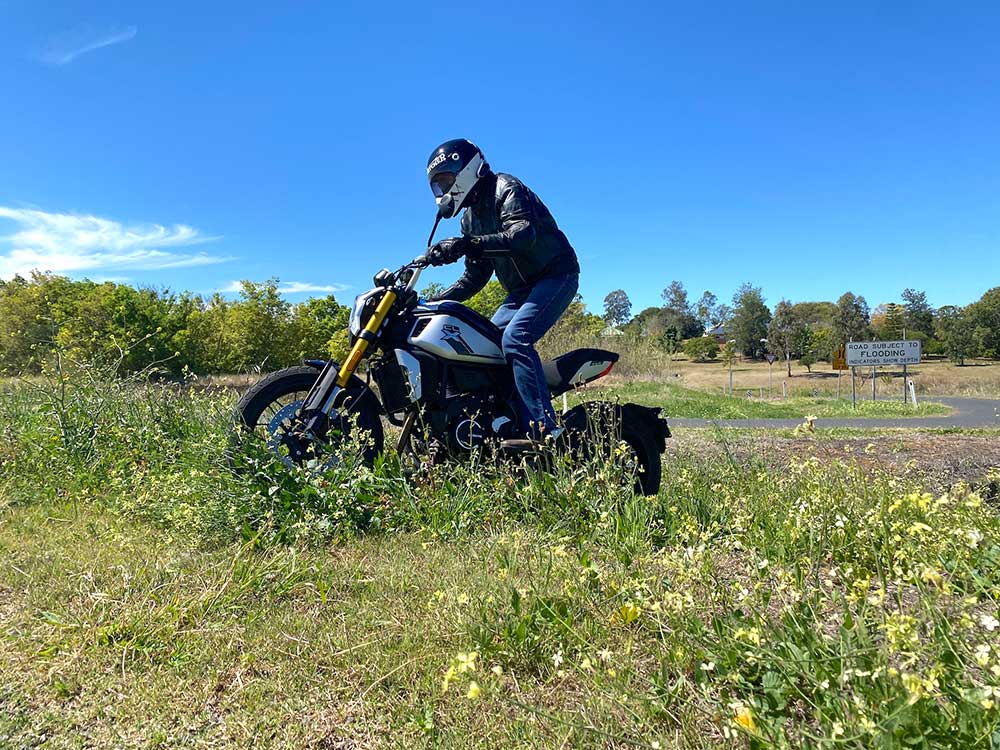 It is no coincidence that the “X” from the name features heavily in the 700CL-X’s styling either. The design is part of the exciting body of work produced by Austria’s Kiska Design House, which has built its brand on a catalogue of futuristic forms for KTM. The X design aesthetic is mirrored throughout various parts of the 700CL-X – from the futuristic LED headlight with “X” illumination pattern, to one of the tidiest of tail designs on the road today.

Not only is the bike well styled, but there’s lots of attention to detail in the build quality, from neat frame welds to little grommets in the headstock to channel the cables. In fact, a lot of bigger name brands could take notice of CFMOTO’s orderly approach to cabling.

The 700CL-X also has one of the most attractive standard exhaust pipes on the market, featuring a stubby, brushed aluminium look and a growling exhaust note that’s pleasing to the ear, without being a public nuisance. With this pipe treatment there’s simply no need for an expensive aftermarket replacement, although the catalytic convertor tucked underneath the bike is massive.

The 700CL-X Heritage is powered by a stroked version of the inline twin-cylinder water-cooled engine that CFMOTO use in their 650cc range. The extra 4mm stroke takes capacity out to 693cc, with other updates including Bosch fuel-injection, split connecting rods, a slipper clutch and forged pistons. An optimised air intake system improves efficiency and increases peak power from 41.5kW to 55kw and torque from 62Nm to 67Nm, according to CFMOTO.

The result is a much punchier unit that will happily keep pace with other models in the midrange naked bike market. In fact, it will readily pop the front wheel if you get a little too eager in the first couple of gears. That’s not just the result of a punchier engine, but also gearing which is arguably too low for Australian conditions. First gear will hit the engine’s 6000rpm rev limiter by the time you get to 60km/h, while highway cruising speed sees the engine spinning at 4500rpm in sixth gear, or a little too excitedly to be classed as "relaxing".

The low gearing may aid acceleration, but it also results in numb hands and tingling nether regions after an hour’s ride. There’s also the issue of disappointingly poor 5.0L/100km fuel economy, meaning the fuel warning is flashing after just 160km, despite the bike’s 13-litre fuel tank. That said, the test bike had only just received its 1000km service, so it’s possible the engine may loosen up and provide slightly better fuel economy over time. There are two selectable engine modes – Eco and Sport – although somewhat confusingly Eco doesn’t improve fuel economy. It does, however, soften throttle response which can be handy in slippery conditions.

Over the course of a two-week road-test the gearing saw me rapidly clicking through the cogs to fourth and even fifth around town, and then up into sixth at anything beyond 80km/h. Thankfully, the 700CL-X gearbox is slick, although neutral can be difficult to select, and clutch pull is moderate. A smaller aftermarket rear sprocket would sort out the gearing issue, but one shouldn’t really need to be making such changes on a new bike.

Another concern is that service intervals are a low 5000km, which is painfully short but aided by the fact the air filter is easily accessed for cleaning. CFMOTO also claims that oil change is simple and can "easily be done at home,” so owners may be able to save some money by doing their own servicing. That said, the standard two-year unlimited kilometre warranty is extended by a further year if servicing is done by an authorised dealer.

The riding position is upright and neutral for most riders although at 183cm tall my knees became sore after a few hours in the saddle, due to the high pegs. The seat is 800mm high but narrow enough for your correspondent to put both feet flat on the ground when stopped with legs still bent. The saddle initially feels quite soft but as you sink down into it there’s a hard and flat platform underneath which becomes uncomfortable after a couple of hours. There is also hardly any room for a pillion or a tail bag and no tie-down points for luggage.

Straight bars and high and wide mirrors make it easy to filter through traffic but on the highway the mirrors create some head buffeting, while the high engine revs blur the rear-view image. Riders will no doubt enjoy the convenience of the easy-to-use cruise control, however, even if it’s not as diligent as it needs to be in this country, losing speed up hills and over-speeding on the way down.

The round instrument pod displays a plethora of information, and the LCD screen is easy to read in even bright sunshine. However, the naming conventions of "SEL" and "ADJ" on the buttons to the left of the instruments may create confusion as they don’t stand for "select" and "adjust", as you might expect. Instead, the top button toggles through information on the bottom of the screen and the bottom button toggles through info on the top off the screen. If that isn’t weird enough, a couple of the displays seem to have no meaning at all.

Despite having a lot of info available – including clock, instant and average fuel economy, average speed, engine temperature, odometer, battery volts and hours of use – there is only one trip meter. Most riders including this one would happily forgo the two unexplained displays for a range and/or a range-to-empty display.
CFMOTO 700CL-X Heritage. 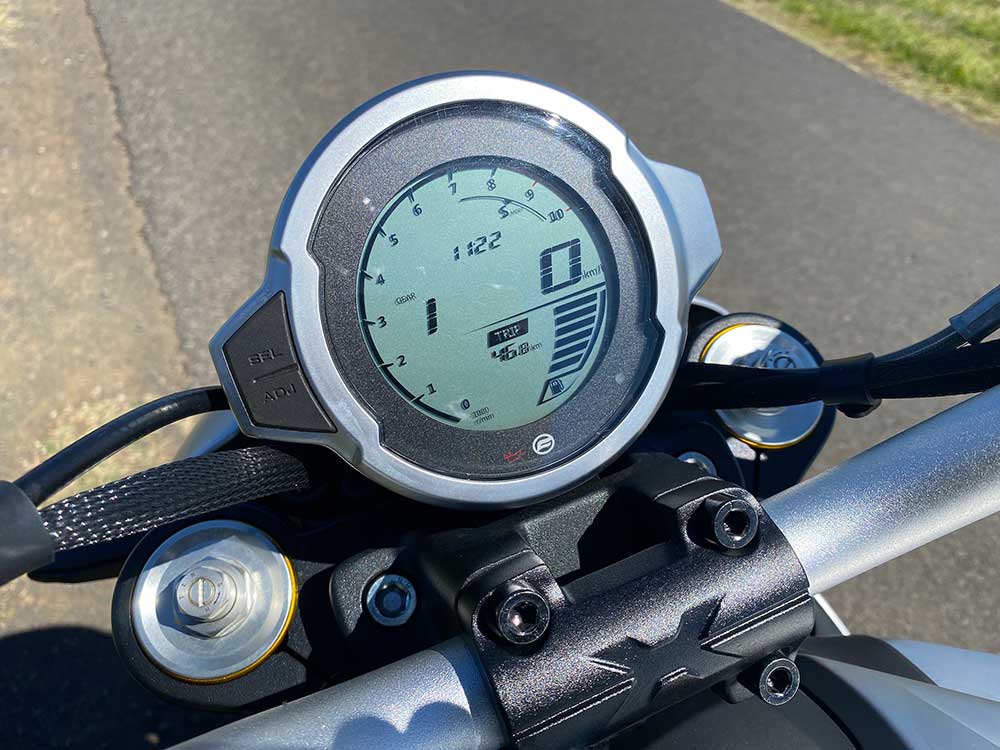 I found the suspension fine for smooth roads, but harsh and choppy on bumpy roads, although at least there was no bump steer or chattering. The forks are adjustable for rebound and damping but doing so didn’t seem to make a lot of difference, while the rear shock is also adjustable for preload but access with the necessary C-spanner is difficult.

As with the engine’s low kilometre performance, it’s possible the KYB suspension may also lose some of its stiction and provide a more compliant ride with a few more kilometres under the wheels. The front brake disc size looks on the small size at 320mm but the bike weighs just 183kg dry (196kg wet), so it turns out to have quite effective braking.

In terms of its usage profile, CFMOTO describes the 700CL-X Heritage as being designed for 20% off-road, with its scrambler tyres and basic suspension. That seems about right and fits in with other road-oriented scramblers from companies such as Yamaha, BMW and Ducati.

In summary, this is a fine entry into the non-learner sector for CFMOTO and a portent for bigger things to come from the brand. While it looks the part straight off showroom floor, the 700CL-X Heritage also comes with a range of accessories including classic-style panniers, a diamond-stitched seat, bar-end mirrors, as well as a collection of rider gear.