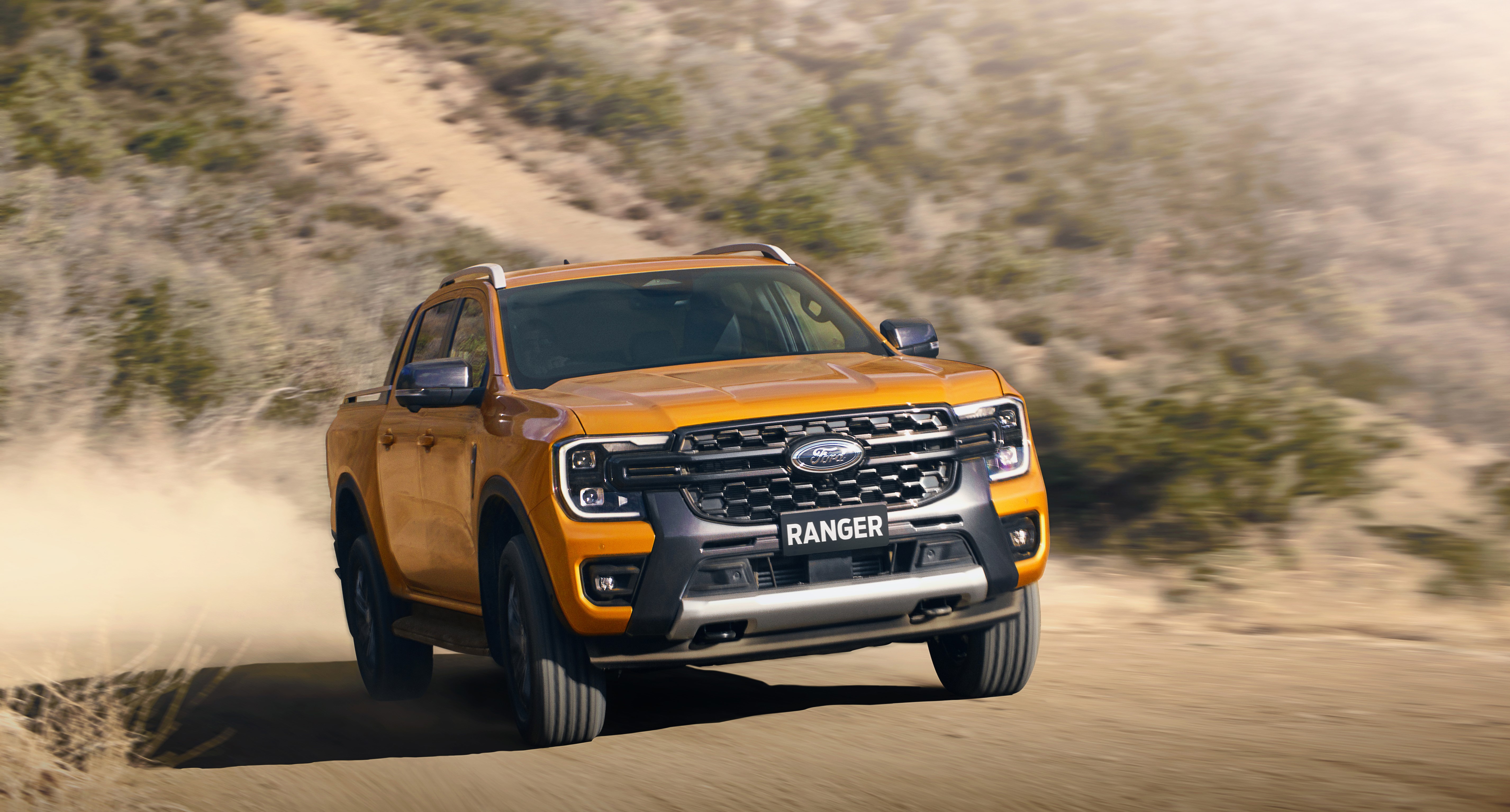 After teasing the public for months with disguised images and snippets of information about its all-new Ranger ute, Ford has finally whipped the covers off its much-anticipated workhorse ahead of the new model going on sale here in mid-2022.

As with the previous generation Ranger, Ford Australia designers and engineers led the development work on this new model, meaning the global reveal had a strong Australian flavour.

Despite this, Ford says Australia is just one of more than 180 international markets the new Ranger will sell into, requiring the new model to undergo extensive customer consultation over the course of a five-year design and development process.

While the reveal told us just about all we need to know about the interior and exterior styling, plus much of the relevant technical information, it stopped short of providing pricing and exact specification details, and studiously avoided any discussion about a replacement for the top-of-the-line Ranger Raptor. Despite this, a brief glimpse of the new Raptor during the presentation contained a subtle hint that the new Raptor may be revealed in February 2022.

Meanwhile, headlining the extensive list of changes to the Ranger is the introduction of a new 3.0-litre twin turbo diesel V6 with 10-speed automatic and a full-time all-wheel drive system on selected models. Ford declined to release official power and torque figures but it’s the same ‘Powerstroke’ engine the company Ford uses Stateside in the F-150, where it puts out around 190kW/600Nm. Ford claim the engine has been further upgraded for use in the Ranger.

There’s more powertrain news which we’ll get to later, but among the other big news for the MY22 Ranger is its entirely new exterior design, featuring a tough, dominating front end and a more muscular side view with bolder wheel-arches. Up front, new LED headlights interlock with the grille via C-shaped daytime running lamps, while at the rear the Ranger name is stamped boldly across the tailgate.

Compared with the old Ranger the new model looks more chunky, muscular, and athletic, with a bigger, higher, and more chiselled bonnet and front end that gives it powerful presence. It also has less chrome and more matt finishes than before, to emphasise its sportiness over luxury.

The overall effect is of a bigger, more upright Ute, with a wider and taller stance. The width isn’t just an illusion, either, as the track is now wider and enhanced by fuller, more muscular guards which contribute to a better stance.

The new Ford ute also boasts a tub that’s been widened by 50mm so can now accommodate a full-size pallet between its wheel arches. Other work-oriented features include a built-in bed liner, unique tie down and cargo management systems, an integrated tailgate handle at the top of the tray, and a neat new feature in the form of integrated side-step on both sides of the tray. 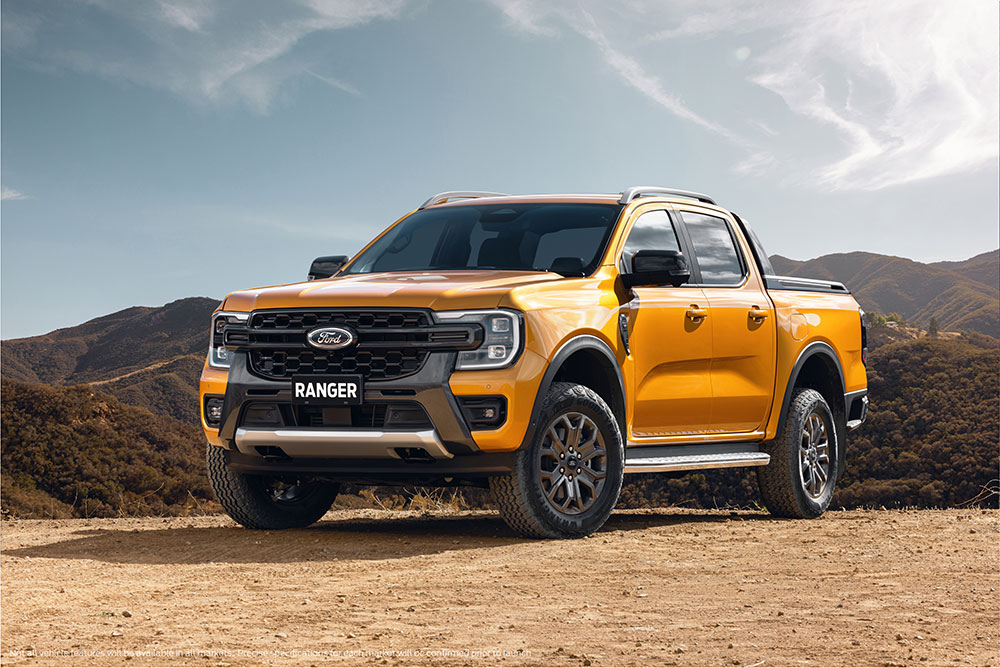 The tray setup also includes a moulded bed liner to prevent scratching and damage, functional load dividers, optional tubular side rails for tie downs, and load box casings on the upper sides and back to protect the bodywork. The tailgate can also double as a functional workbench, with clamp sockets on either side and access to a new 400W 240V socket.

Another handy new feature is the inclusion of lighting under the tray side rails, to assist when loading or working at night, plus ‘zone’ lighting – including more high-powered powerful puddle lamps on the underside of the door mirrors – that can be switched on all around the vehicle, either via the vehicle touchscreen or the FordPass phone app. The latter can also be used to start the vehicle remotely and pre-cool or hear the interior.

While the exterior design is undeniably eye-catching, it’s the Ranger’s new interior that Ford claims is among its biggest ‘wow’ features, with a fresh design, new materials, more features, and more integrated tech.

Inside, the newly designed interior is expansive and comfortable looking, with soft touch materials used throughout, and new portrait-oriented colour touchscreens incorporating Ford’s signature SYNC 4 connectivity and entertainment system, which provides access to a wide range of vehicle features. The system comes with voice-activated commands, plus an embedded factory-fitted modem, when linked with the FordPass phone app.

Depending on model variant 10.1 or 12-inch infotainment screens are neatly integrated into the overall interior design, while a modern configurable 8.0-inch digital instrument cluster replaces the previous model’s analogue dials.

There are plenty of useful storage spaces, including larger map holders, a lidded storage area atop the dash, and space saving retractable dashboard cupholders. There are also different types of consoles, depending on the model grade, and new shifter variations, including a short-throw e-shifter.

The engines will drive through the familiar 10R80 automatic transmission, albeit with changes that Ford says have made it stronger and lighter, with a new torque converter, smaller gaps between the ratios, and the adoption of real-time adaptive shift logic, meaning the transmission response adapts to the driver and driving conditions. 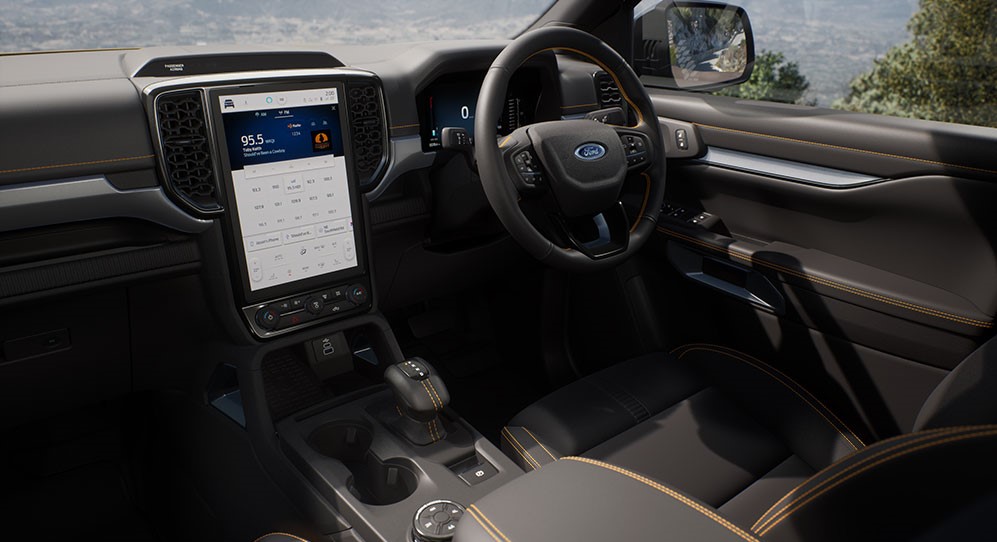 Under the new Ranger is an upgraded chassis riding on a wheelbase 50mm longer and a track 50mm wider than the prior Ranger. A hydro-formed front-end structure creates more space in the engine bay for the new V6 engine and helps future-proof the Ranger for other propulsion technologies, including hybrid or electric power. It’s the same architectural setup as the old model, but Ford calls this a third-generation T6 platform and says every single part has been upgraded.

Dynamically, the new Ranger should ride and handle better thanks to suspension upgrades focused on delivering a smoother and more comfortable ride. The wider track and longer wheelbase help in this regard, as does shifting the rear suspension dampers outboard of the frame rails to provide a more consistently comfy ride.

The widening of the suspension also allows greater axle articulation for better off road traction, while the front wheels have been moved 50mm closer to the front to improve the approach angle. Other off-road oriented additions include more prominent front recovery hooks for better access, and the off-road controls moved into a single sync-screen, removing buttons, and decluttering the centre console.

Ford says that with a single button press drivers can access the Ranger’s off-road and drive modes, where they can monitor the driveline, steering angle, vehicle pitch and roll angles, among other controls. The infotainment screen is also linked to a 360-degree camera for easier parking or when negotiating rough terrain.

Depending on model variant the new Ranger will offer two 4x4 systems. One is the existing electronic part-time shift-on-the-fly system with high and low range, the other a new electronically controlled full-time 4x4 system. The latter, which is expected to be paired with the V6 and possibly the bi-turbo four-cylinder in higher grade variants only, will also bring with it four-wheel disc brakes for these models. Four-wheel drive models will also now offer a choice of six selectable drive modes for different terrain, as per what’s offered on the current generation Raptor

The combination of a V6 diesel and permanent all-wheel drive system was no doubt driven to some extent by the fact this new Ford Ranger will also form the basis for the upcoming Volkswagen Amarok, which is already specified this way. The new Amarok will share its technical underpinnings with the Ranger but will be tuned and specified differently when it arrives here in 2023.

In addition to revealing the Next-Generation Ranger, Ford also outlined its “always-on” commitment to customers, with a host of services centred around convenience. Depending on market, these include service pick-up and delivery, a Ranger Concierge program, and streamlined online service booking options.

The Ranger ownership experience is also set to get a boost with the introduction of Ranger Expert Concierge, a new feature that will allow customers to consult with a Ranger expert on all manner of topics relating to their vehicle.

Ford is also in the process of developing a ‘Master Your Ranger’ web portal which will complement the ownership experience, and plans to introduce
Ranger-specific 4x4 days in select markets.

The new Ranger will be built at Ford’s manufacturing plants in Thailand and South Africa beginning in 2022. Local specifications and pricing will be announced closer to arrival.

Buying a carCar reviewsNew cars
Subscribe to our enewsletters