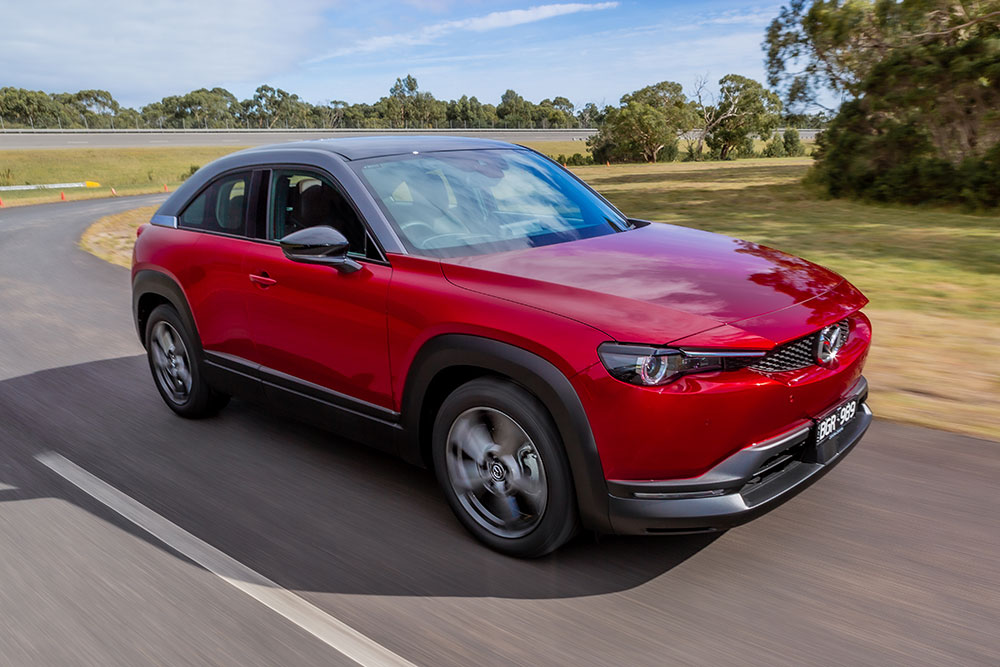 The debut earlier this year of three mild hybrid versions of the first-ever MX-30 was the curtain-raiser for Mazda’s release, only a matter of weeks later, of the brand’s first production EV, the MX-30 E35 Astina.

Like most other manufacturers, Mazda is moving to electrify its powertrain offerings, albeit at a slower pace than some rivals.

While the Hiroshima brand has committed to additional hybrid, PHEV, and battery electric vehicles by 2025, Mazda Australia believes these will be companion models to its internal combustion-powered models for some time yet.

The MX-30 mild hybrid is offered in three grades, each using the same 114kW/200Nm 2.0-litre Skyactiv G petrol four-cylinder engine, and the company’s own M Hybrid technology, driving through a six-speed auto to the front wheels.

Buyers prepared to shell out $65,490 can also have the MX-30 E35 Astina EV, although at a mere 224km of range (official combined cycle), it looks rather underdone by comparison with similarly priced competitors.

The MX-30 blends a coupe-like silhouette into its small four-door SUV proportions, with styling that draws from Mazda’s distinctive “Kodo” design language.

Perhaps its most noteworthy design attribute are the unusual freestyle doors, a centre-pillar-less design like that seen on the former RX-8 sports car, and current BT-50 Freestyle extra cab ute.

Without B-pillars to hinge on, the rear doors open rearwards to 80 degrees, after first opening the front doors.

A “virtual B-pillar” is created when the doors are closed.

Mazda point to the improved ingress and egress this provides for passengers and cargo, plus the fact it lends the cabin an airier feel.

That’s fair enough, but the need to open a front door before being able to access or exit the rear feels awkward and is arguably less practical than a traditional four-door arrangement.

Mazda claims that extensive use of hot-stamped materials to reinforce the doors and side sills realises strength and energy-absorbing efficiency that’s equal to vehicles with centre pillars.

Independent crash testing by ANCAP appears to back this up, delivering the MX-30 a maximum five-star safety rating with maximum points awarded for the side impact tests.

The generous safety package extends to 10 airbags, including a centre front and driver’s knee airbag.

The interior is easy to live with, providing controls that fall easily to hand, and the all-important ability to easily pair devices. 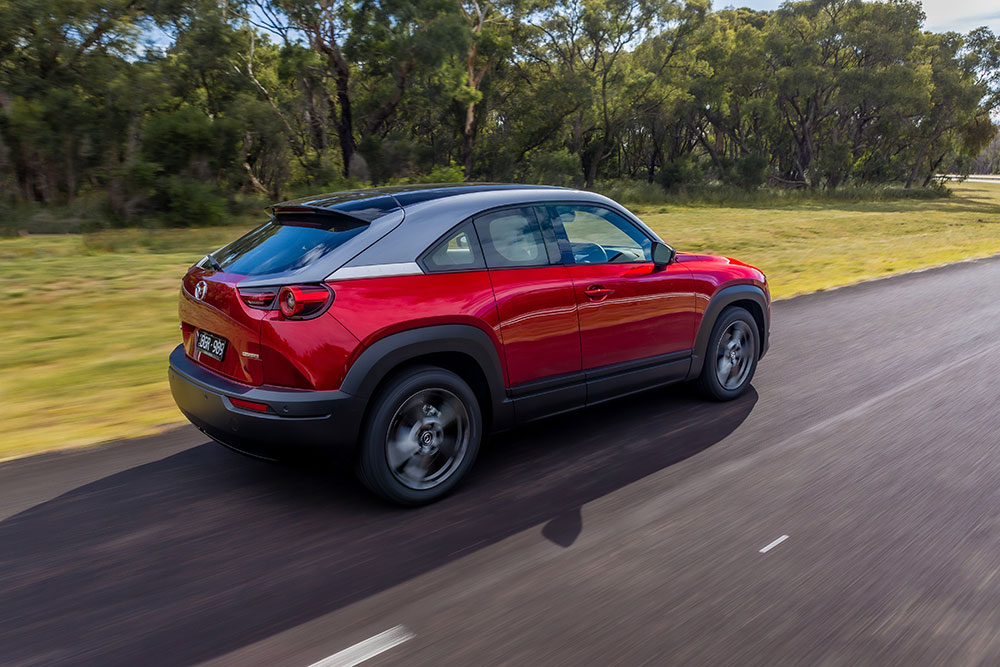 Mazda said the cork was specially coated and both a natural and low environmental impact material, sourced from production “leftovers” of cork bottle-stoppers.

In a further nod to sustainability, some interior trim materials are made from recycled plastic bottles, while the seating fabrics feature up to 20% of recycled thread.

It all comes together quite nicely to create a premium look and feel, with above-average standards of fit, finish and design.

Once ensconced in the rear pews, passengers are likely to feel a little claustrophobic, though, with limited leg room and head room that will challenge taller individuals.

The close confines are accentuated by the thick pillar design created by the front and rear doors, the fixed rear windows and a lack of console air vents.

The coupe body styling also imposes some limitations on the cargo area which has a quoted volume of 311 litres (VDA).

That’s large enough for four 115cm suitcases and larger than a CX-3, according to Mazda, but is still noticeably smaller than CX-5 medium SUV.

The load area can, however, be expanded for larger items courtesy of the split flat-folding rear pew.

The styling also necessitates a smallish rear window which does no favours for rear visibility, although a camera helps mitigate the issue when reversing.

The rear camera can be upgraded to 360-degree monitor on Evolve and Touring grades (it’s standard on Astina) by optioning the $1,500 Vision Technology pack.

Mazda has a solid reputation for building cars that deliver driving pleasure.

And the MX-30 proves comfortable and well controlled over most road surfaces, with confident and capable handling through twists and turns.

The steering is agreeably light and precise, too.

The system can shut the petrol engine down before the car comes to a complete stop, with the starter-generator providing a smoother transition to an idle stop and aiding engine re-start by spinning the engine’s crankshaft.

Technical explanations aside, the powertrain never shirks its duties, stepping off the line promptly and thereafter feeling impressively responsive and with enough in reserve for highway passing.

Mazda’s claims about the stop-start system also seem reasonable, with the system proving one of the smoother and less intrusive we’ve experienced.

In terms of warranty and service, Mazda covers the M Hybrid MX-30 under its Service Select plan, with routine services to five years or 50,000km nominated to cost a reasonable total of $1,942.

With its attractive styling, generous safety and standard equipment list, and more-than-competent driving dynamics, the MX-30 mild hybrid should have no difficulty finding homes with happy owners.