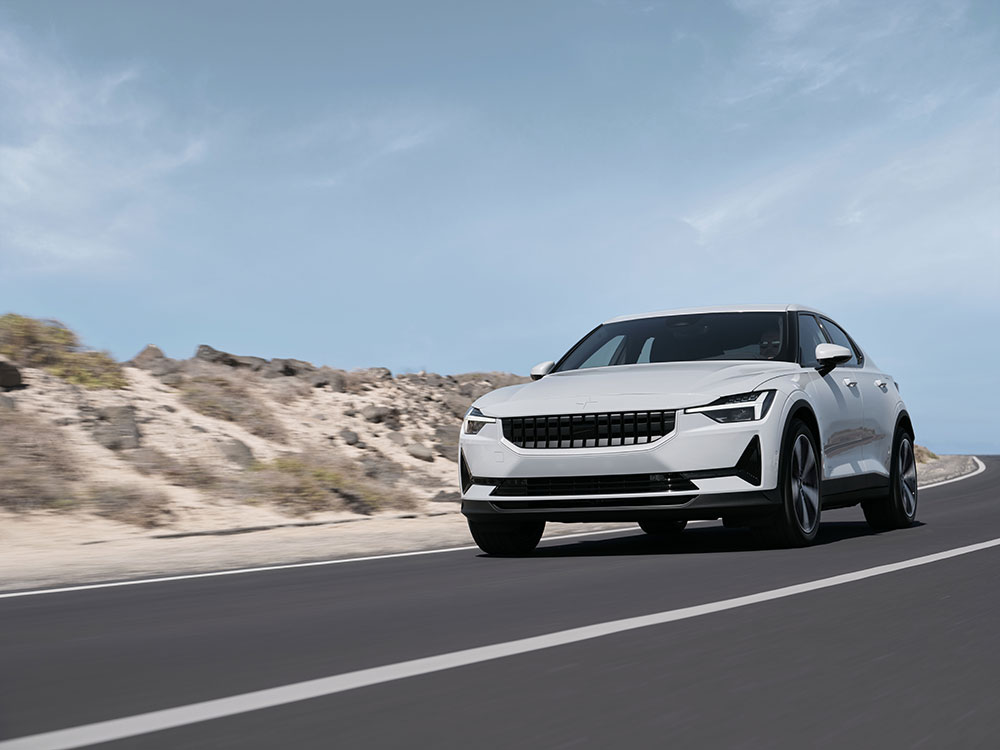 Ask the CEO of any established automotive brand if Australia, already one of the world’s most crowded new vehicle markets, needs more nameplates competing for consumers hearts and minds, and the answer is likely to be a resounding ‘no’.

But still they come (with apologies to H.G Wells’ The War of the Worlds.)

The newest automotive brand to make landfall in Australia is Polestar, the dedicated electric vehicle brand founded by Volvo Cars and Geely Holding.

Headquartered in Gothenburg, Sweden, Polestar shares technological and engineering synergies with Volvo but is a stand-alone brand.

Established in 2017, Polestar has already launched in 14 global markets across Europe, North America and China, with Australia one of five new markets added in the Asia Pacific region during 2021.

The Polestar 2 is the company’s first fully electric, high-volume car and journalists were recently given a brief opportunity to sample its wares, ahead of an official on-sale date of January 2022.

Like its key rival Tesla, Polestar is committed to an online-only sales model, although the company promises there will be a physical presence via Polestar ‘spaces’ and ‘destinations’ in various cities.

The Standard Range features a single electric motor and 64kWh battery, providing outputs of 165kW/330Nm and a range up to 440km.

Finally, the Long Range Dual Motor gets the same 78kWh battery, but a reduced range of 480km, thanks to its twin motors producing a thumping 300kW/660Nm and consuming a higher 19.4 kWh/100 km versus 17.1 kWh/100km for the single motor version. The Plus Pack also includes a heat pump, which Polestar says reduces the need to use valuable battery capacity to sustain the cabin climate.

The system uses ambient heat and residual thermal energy from the drivetrain to reduce energy requirements for climate control by as much as 50%.

In colder weather, this can result in a 10% improvement in range, the company claims.

We drove the Long Range Single Motor, priced at $64,990, which came fitted with the Plus Pack and the Pilot Pack, pushing its price into the mid-$70,000 zone, before we’d accounted for the optional 20-inch alloy wheels (19s are standard).

This puts it on a competitive footing with the likes of Tesla’s Model 3 which has a list price of $78,458 for its equivalent Long Range model, admittedly with all-wheel drive.

Polestar made much of the fact that its launch pricing for the two single-motor variants is under the threshold for the $3,000 Electric Vehicle Rebate being offered in New South Wales and Victoria, as well as significant stamp duty savings in some jurisdictions.

At the time of writing there is no equivalent offering from the Queensland Government.

First impression of the Polestar 2 is that it’s a handsome-looking machine, with crisp lines, a high shoulder line and unusual fastback styling that places it stylistically somewhere between a sporty passenger model and an SUV.

The design is distinctive and doesn’t attempt to mimic any other brand, although if you squint hard enough you might find some contemporary Volvo cues, including the taillights and chunky grip-and-pull door handles.

The cabin is easy to climb into and once there it doesn’t take long to achieve a comfortable driving position and familiarity with the controls. 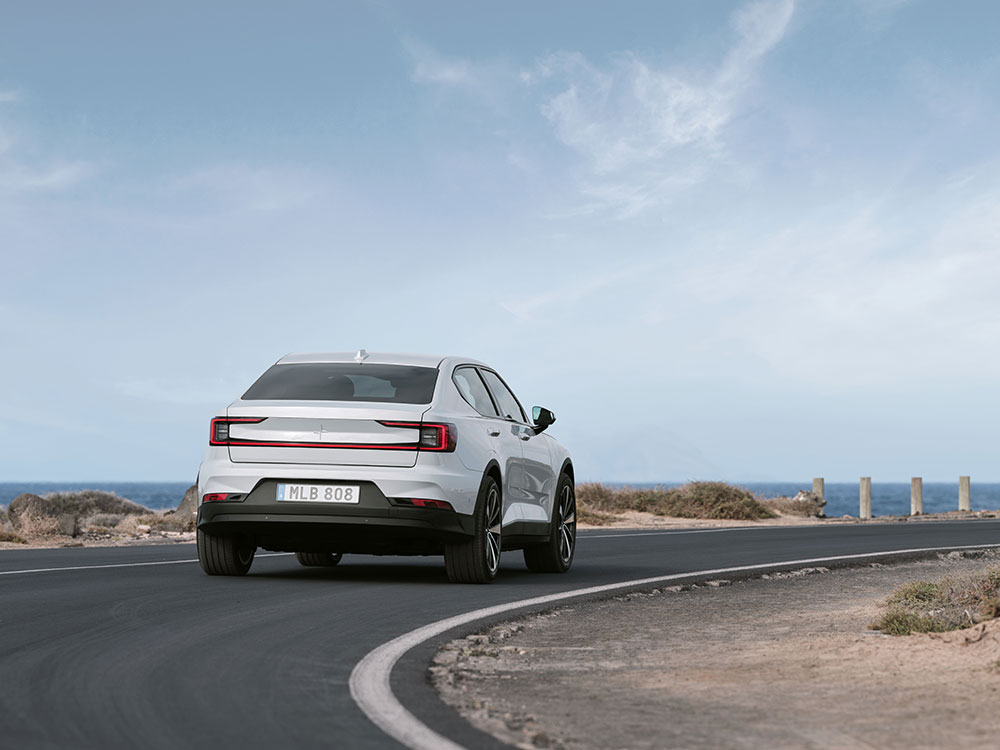 The absence of a start button of any kind is a bit disconcerting, especially when stepping out of the car with it still ‘running’ but sensors in the driver’s seat and the presence of the key are enough to tell the vehicle you are ready to go or stop.

Pleasingly, the interior designers haven’t attempted to out-do Tesla with outlandish design elements, so while the dash and surrounds are entirely contemporary, there’s no over-sized touchscreen with crackling log fire effect buried in its menus, and you still have conventional switchgear for things like mirror adjustment.

The digital dash is nice and clear, displaying speed, battery charge and navigation in one mode, and a simpler and larger speedo and charge meter in another.

The wheel and the top of the stubby driver selector are the only bits of the interior that are imitation leather with the rest of the dash and doors clad in an attractive fabric which Polestar calls WeaveTech vegan upholstery.

Despite an almost complete absence of those usual luxury car staples of leather and chrome, the interior feels stylish and upmarket.

That vibe is carried over to the rear seats, which are roomy enough to allow this six-footer to sit behind himself (just), with individual air vents, a fold-down armrest-cum-ski port, heated outboard seats and two USB plugs.

Visibility is good and the optional panoramic sunroof adds to the overall effect of the interior feeling light and airy.

Boot space is a decent 405 litres and accessed via an electronic liftback, which opens via a wave of the foot under the rear bumper.

The carpeted space features a hinged divider that can be raised to section off the boot into two areas – handy for grocery shopping – and there’s a small area beneath the boot floor for the included 11kW Type 2 charging cable.

There’s an additional 35 litres of storage space in the ‘frunk’, which can take a small overnight bag.

Out on the road the Polestar 2 does what we now expect of EVs, pulling away smoothly and quietly with the rumble of tyre noise and a low electric whine the only accompaniment, at least until you turn up the volume on its excellent Harmon Kardon stereo. 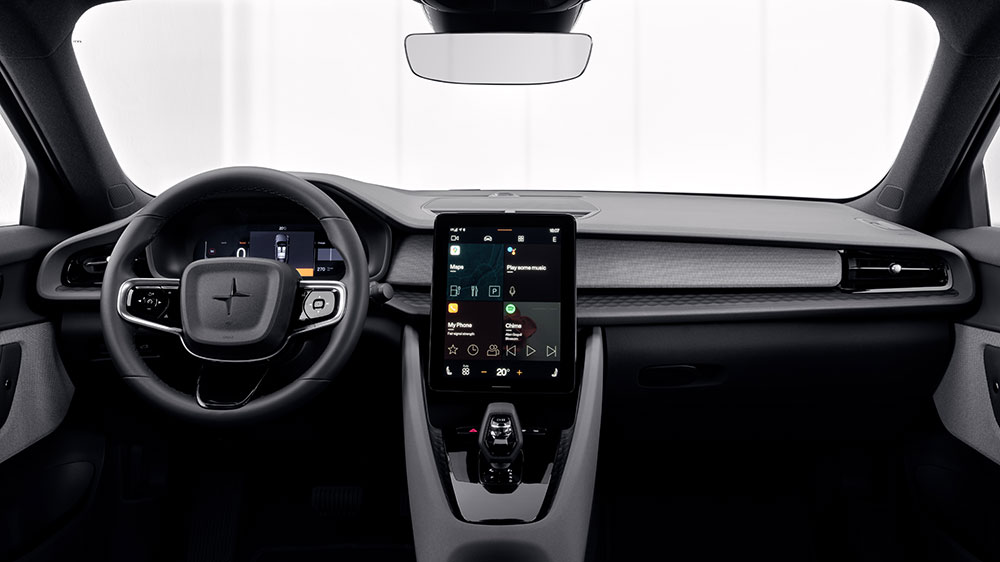 The low-speed ride on the optional 20-inch wheels is a tad annoying on secondary roads with more bump-thump than is ideal on our typically lumpy road surfaces.

It would be good to see how the standard 19s fare over the same surfaces, although the lower profile tyres did prove their worth when the pace quickened on some twisting stuff.

The combination of a low centre of gravity – thanks to the large lithium-ion battery pack being mounted beneath the floor– and strong grip from the low-profile tyres ensures sure-footed handling on challenging roads.

There’s grip aplenty, decent steering, strong brakes and an overall sense of confidence when the Polestar 2 is hustled through corners.

Acceleration is excellent, too, whether coming out of low-speed bends or overtaking from 80-100km/h.

Most drivers will have no complaints with the performance, but those looking for more pace might consider the Long Range Dual Motor version, with its twin motors and 300kW/660Nm outputs.

As with any EV, charging times for the Polestar 2 battery will vary according to the available power of the charging outlet. It’s a sizeable battery, though, so home charging is likely to be a slow affair, meaning about 34 hours for an empty to full charge on a standard power point, or about 11 hours using a more powerful wall box system.

It’s important to note that most EVs are rarely ever charged form flat to full, however, and public charging options are much faster.

The Polestar 2 is a fresh new face amidst the growing number of EVs finding their way onto our market.

With its distinctive design, high-quality finishes, strong performance, impressive range, and polished all-round driving manners, it offers an intriguing alternative to Tesla and other premium EVs that are either here now, or in the pipeline.