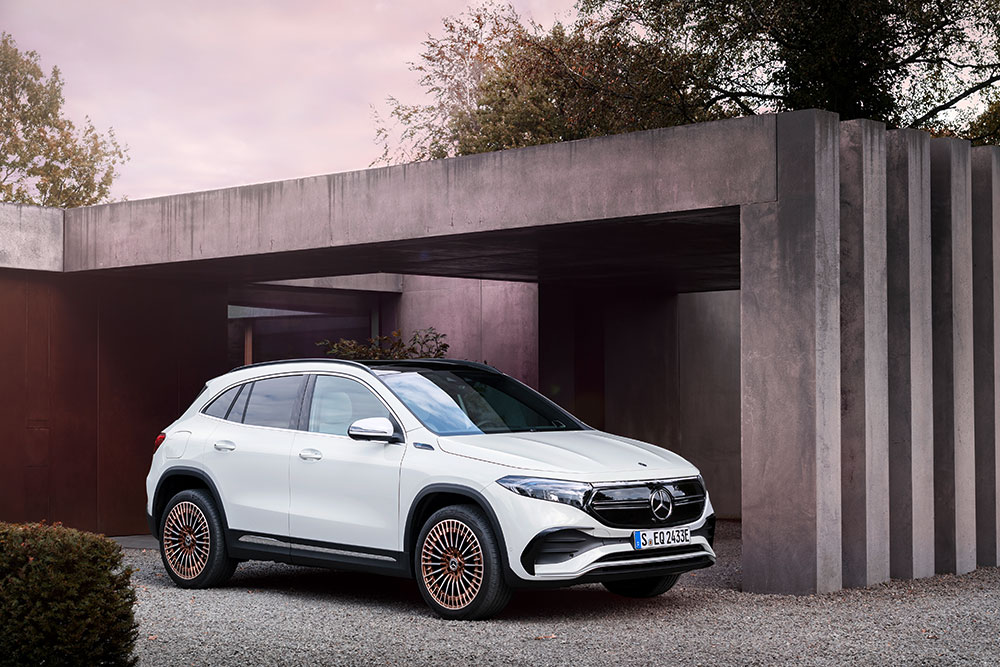 Looking at Mercedes-Benz’s still limited range of electric models, it’s hard to reconcile the German luxury car maker’s bold claim that by 2022 it will have 10 new battery electric vehicles (BEVs) in its fleet.

It also predicted by 2025, plug-in hybrid and full-electric vehicles will account for 50% of its global sales and by 2030 its entire vehicle portfolio will be BEVs.

This is what brand stated during 2021, when it ambitiously shifted its product strategy from an “electric-first” to an “electric-only” approach.

The new strategy effectively supercharges the company’s BEV plans, fueled by R&D investments amounting to more than $63.5 billion between 2022 and 2030.

Here in Australia, the Mercedes-Benz electric pickings are slimmer than Europe, with just two full battery electric offerings in the range, plus a growing number of hybrids and mild hybrids.

While Benz may have got off to a slow start in the EV space compared with rivals like Tesla and BMW, the pace is quickening and 2022 will see an additional three new passenger models: the AMG

EQS 53 4Matic+ sedan, due in the first half of the year, and both the EQB small SUV and EQE large sedan, in the second half.

There’s also a more high-performance version of the EQA 250, the EQA 350 4Matic, which was originally slated to launch in November or December 2021 but has now been pushed out to early 2022.

Mercedes-Benz’s commercial division also confirmed the arrival of a range of battery electric vans in the second half of 2022.

Benz has kept the choices for customers relatively simple, offering a highly specified model as standard for $79,300 (MRLP), plus for the first 12 months on sale a better-equipped Edition 1 variant for $86,600 (MRLP).

As you’d expect from the German safety pioneer, occupant safety is well catered with the Driver Assistance Package and Parking Package included in the base model’s price.

If you’re thinking the EQA looks vaguely familiar, then you’d be right, since it’s based on the conventionally powered Mercedes-Benz GLA compact SUV, so shares its proportions and styling. 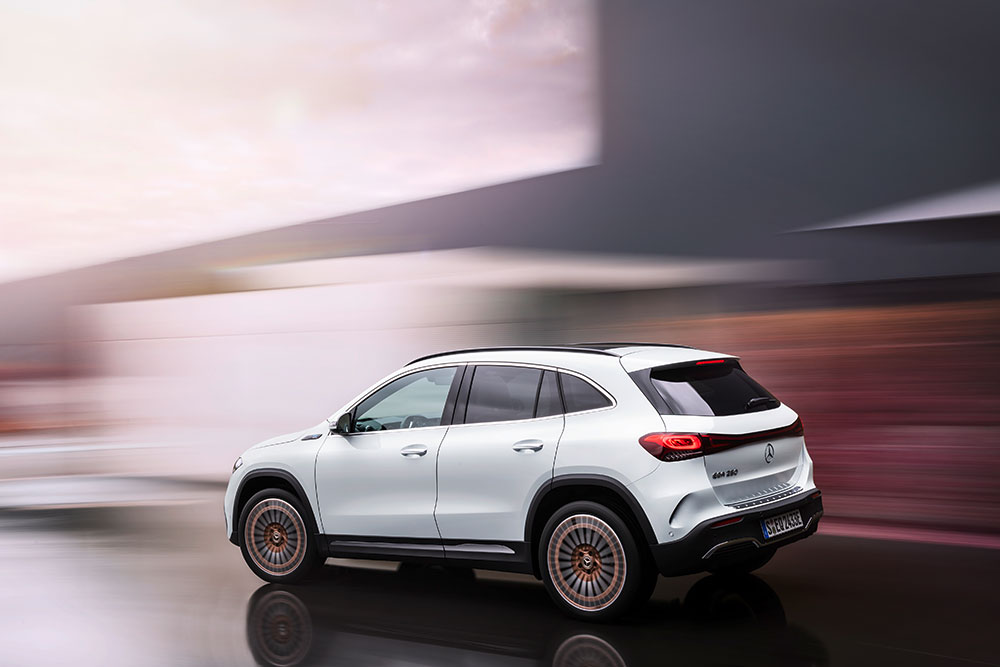 Mercedes-Benz says the dimensions of the EQA are like the GLA but not identical, with one critical difference being the former’s 340-litres of cargo space being 105-litres shy of the GLA, thanks to its large underfloor battery pack.

The battery also creates some compromises for rear-seat accommodation, thanks to the seat base being higher than in the GLA, but otherwise rear-seat legroom and headroom is unaltered.

Incidentally, the practice of building EVs on legacy platforms designed initially for internal combustion power won’t be the case for much longer, with Benz declaring from 2025 onwards, all its newly launched vehicle architectures will be electric-only.

Mercedes’ marketers describe the EQA 250 as “the electric athlete in the compact segment” and it certainly feels smaller and nimbler than its big brother the EQC, not to mention considerably less expensive, which will extend its appeal to a broader demographic.

With its black flat panel grille (now a hallmark of Benz’s electric EQ brand) and horizontal optic light strip stretching across the front of the vehicle, the EQA is instantly recognisable via its dramatic light signature, a characteristic that’s emulated at the rear where the LED taillights merge into a full width tapered LED light strip.

Other styling characteristic of the EQA include blue highlights within the headlights and a high-gloss black badge with EQA lettering in blue on the front wing.

Inside the cabin, the EQA features the now familiar “Hey Mercedes” voice control system, which provides hands-free control of a range of MBUX functions that can otherwise be accessed via the 10.25-inch touch screen at center of dash.

That same screen is repeated in front of the driver with an identically sized configurable digital instrument display.

The twin widescreen digital display screens are the standout feature of the sophisticated and hi-tech interior.

The centre infotainment screen is the hub for functions such as navigation, media playback, telephone and vehicle functionality and is impressively intuitive to use, with many key functions operated via voice actuation, but also a haptic touch pad on the center console.

The interior is nicely designed and trimmed, with a suitably luxurious mix of leather, bushed aluminium and other quality finishes.

It’s impressively smooth and quick off the mark, even despite its 480kg payload of lithium-ion battery pack pushing kerb weight to a hefty 2040kg.

There’s enough instant urge to press occupants back firmly in the seat under full acceleration, with 0-100km/h covered in a respectable 8.9 secs.

It’s all delivered near silently, of course, thanks to the electric motor and impressive wind and road noise insulation.

The well-tuned independent suspension utilises adaptive dampers to provide a nicely cosseting ride, even on the standard 19-inch AMG alloy wheels, but still has enough discipline to handle the moment when pressed to perform through bends. While it’s certainly capable of being driven quickly, the personality of the EQA 250 is skewed more towards luxury tourer than a sports-electric feel.

Anyone looking for a bit more pace, should check out the forthcoming EQA350 4Matic, which boasts a punchier twin electric motor drivetrain with outputs of 215kW/520Nm, and 0-100km/h acceleration of circa 6.0 seconds.

Meanwhile, back with the EQA 250 whose 66.5kWh lithium-ion battery provides a decent range of 480km (ADR), or 408km if using the WLTP cycle.

We found it better to use the regenerative system as much as possible in urban driving, as the pedal feel for the conventional stoppers is quite soft and it hard to modulate smoothly.

There’s also a separate energy recuperation system that has five modes to choose from, encompassing D+, D, D-, and D--.

The default D mode is the easiest to relate to and feels much like a normal vehicle, with only mild regenerative braking effect, while D+ is a gliding mode that allows the car to coast for improved efficiency, and the D- mode allows higher levels of regenerative braking.

On the all-important topic of charging, the EQA 250 features a Type 2 CCS charging point and comes supplied with an 8m cable for home charging and a 5m cable for public charging.

It can be recharged at home via an extra cost Mercedes-Benz Wallbox ($1250 + installation) or using a standard 240-volt wall plug.

Charging from 10-80% on a 100kW DC public charger will take around 30 minutes, which may be the preferred choice for many buyers since the EQA 250 comes with a three-year subscription for unlimited charging at Chargefox rapid and ultra-rapid charging stations.

The EQA is sold under the same fixed-price agency sales model as the EQC, which is essentially an online sales model but there are also 41 specialist Mercedes-Benz EQ dealers nationwide that customers can purchase from.

For some people this approach will take a lot of the stress out of the new car buying process, while for others the inability to negotiate on price may be seen as a negative.

In summary, based as it is on the existing Mercedes-Benz GLA the EQA 250 lacks the visual “wow” factor of dedicated BEVs such as Teslas, or Hyundai’s Ioniq 5, but it’s nonetheless a nicely designed and handsomely finished vehicle.

Its performance and range are competitive with other EVs on the market, Tesla-aside, and its price positioning is reasonable by the inflated standards of prestige brands.

There are compromises in terms of its boot space and rear-seat comfort, but these won’t be deal breakers for most people, who will likely better appreciate its quiet, comfortable and relaxed driving manners, and the absence of tailpipe emissions.

While not outrageously impressive in any area, the EQA 250 is well placed to appeal to buyers who want a sub-$100k premium electric vehicle that isn’t a Tesla.