Four months after the international reveal of a bold new look and features upgrades for the 2021 Navara, Nissan has released the first examples of its new workhorse in Australia.

The headline act, a sporty new model grade dubbed the PRO-4X was not included in the launch drive program, however, with Nissan Australia instead showing a static example.

A company spokesperson said it would be several more weeks before the first examples of the recreationally oriented top-spec model would arrive.

More on the PRO-4X later but for the rest of the range this is the latest in a series of regular refreshes for the fifth-generation D23 Navara which launched here in 2015.

Unlike grandfather’s axe, the Navara is undoubtedly the better for these various changes, the latest of which includes range-wide styling enhancements to the bonnet, front fascia, grille, and headlights, with Dual Cab models also benefiting from changes to the rear tub, tailgate, and taillights.

Nissan has simplified the range to four key grades – SL, ST, ST-X and the new PRO-4X – dropping the former DX and RX variants.

Despite this, the Navara range still encompasses 4X2 and 4X4 drivetrain variants available across three different cab styles – Single, King and Dual Cab – with all models now sporting 17-inch wheels as a minimum.

Private drive-away pricing for the new range kicks off at $33,890 for the single cab chassis 4X2 with manual transmission, stepping up through a total of 12 variants to $62,790 for the PRO-4X Dual Cab Pickup 4X4 with auto transmission. The ST-X Dual Cab 4X4 auto with leather as tested here, runs to $59,790.

Nissan has moved to match as best it can the higher safety benchmark established last year by the new Isuzu D-Max and its Mazda BT-50 twins. 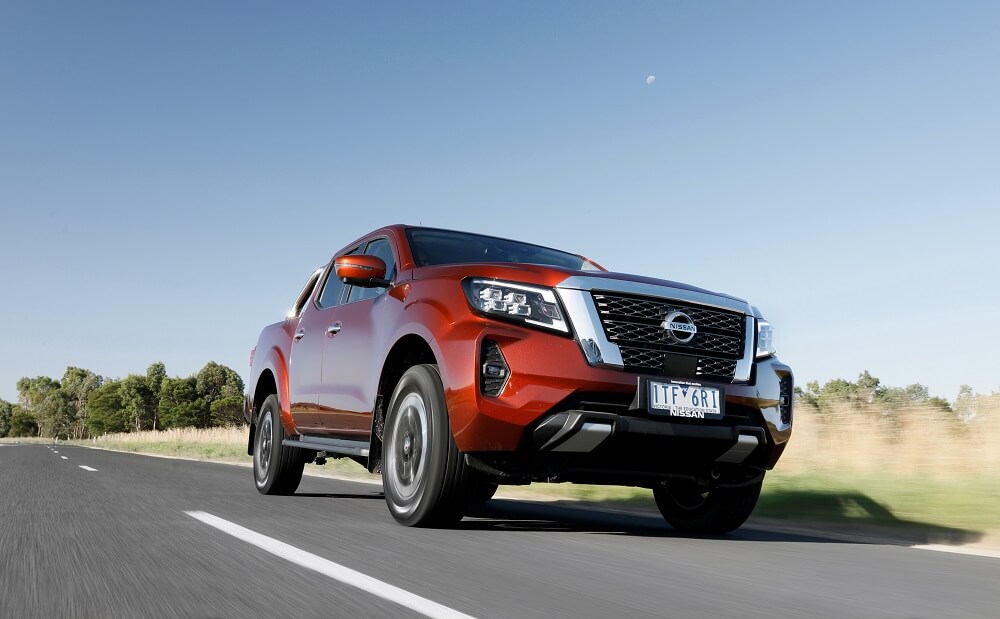 Notably absent versus the aforementioned-D-Max and BT-50 as well as the market-leading HiLux, even in top-spec grades, is the extra front centre airbag, positioned between the front seats to avoid head clashes in accidents.

Stylistically, among the more obvious changes to the updated Navara is an exterior redesign which Nissan describes as being “more extroverted and athletic”.

The new look features a bold new front fascia with a prominent and distinctive “interlock” grille.

There are also enlarged front wheel arches, and on ST variants and above new quad LED projector headlamps.

For good measure, the Navara name is embossed on top of the grille and across the full width of the tailgate.

At the rear, there are new LED taillights plus a step that’s integrated into the bumper for easier access to the tray, while the cargo bed height on Dual Cab models has been increased by 45mm for more tub volume. 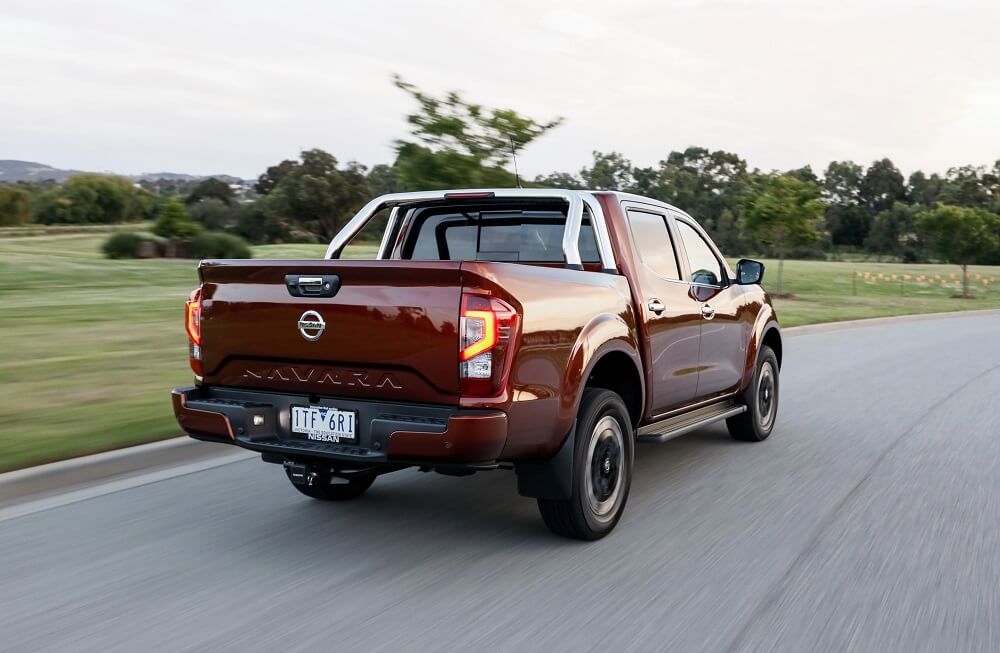 The rear axle and brakes have also been beefed up and payload increased to a healthier 1.2 tonnes. Braked towing capacity remains a category-competitive 3500kg.

Nissan claims the new look is accompanied by a quieter and more comfortable interior, thanks to more sound deadening and new side-step finishes which decrease wind noise.

There are no changes under the bonnet with power supplied by a well-proven 2.3-litre intercooled twin turbodiesel, available in both single and twin turbo guise.

We drove the more muscular twin turbo, now available across more models, with its healthier 140kW/ 450Nm, versus the 120kW/403Nm of the new entry-level Navara SL single turbo.

The engine hitches to a seven-speed automatic transmission across the range, with the choice also of a six-speed manual in pickup and cab chassis variants.

Inside, the Navara has also had a modest makeover to match its new exterior looks with the inclusion of a new steering wheel and a restyled 7.0-inch instrument panel, plus an 8.0-inch touchscreen now with Apple CarPlay and Android Auto connectivity. 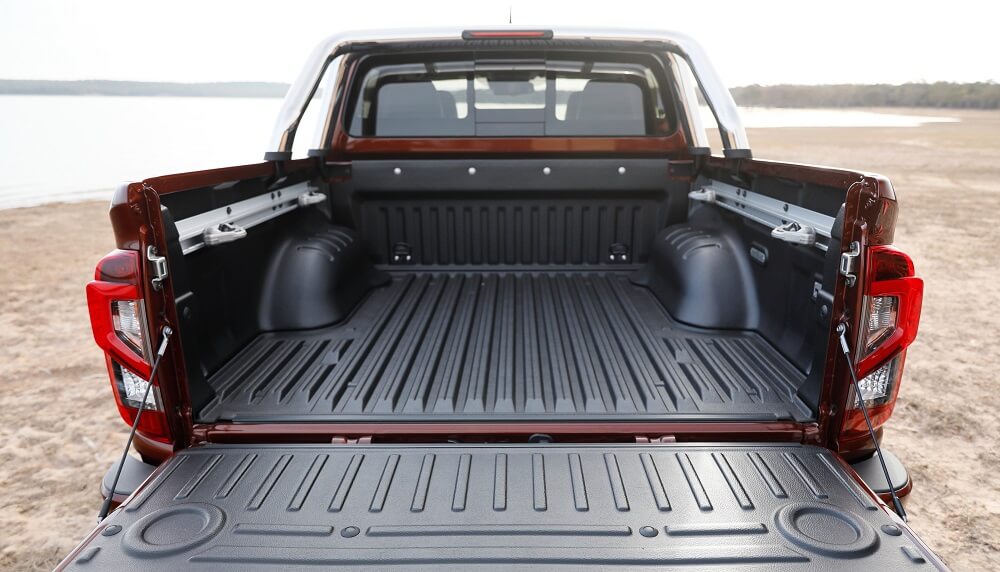 The rear seats have also been redesigned to offer better comfort, according to Nissan, with upgrades to the seat cushions and back shapes, plus a new fold-down central armrest with built-in cup holders.

Unfortunately, the steering is still only adjustable for height and not reach, something that’s been a bugbear of this Navara since launch.

Despite this, obtaining a reasonable driving position isn’t too much of a chore and the cabin in this STX variant feels suitably upmarket, with push-button start, dual-zone climate control, and optional leather-accented seats with eight-way electric driver’s seat adjustment.

We spent a half day at the wheel of two different models, both hitched up for towing and can confirm the cabin is respectably quiet for a diesel ute, although you would need a decibel meter to be able to quantify by how much.

Suffice it to say that when underload you can still hear the engine working, but the noise is not excessive.

The twin-turbo engine delivers performance that is short of the best in class but by no means a weak link.

It's a gutsy and decently responsive unit that easily handled the 1220kg in the tray and trailer of our test vehicle.

The auto transmission is a smooth-shifting unit and includes a tow mode switch, while ride and handling, which has long been a Navara strength, remained well composed throughout a drive route that included patches of rough, secondary bitumen. 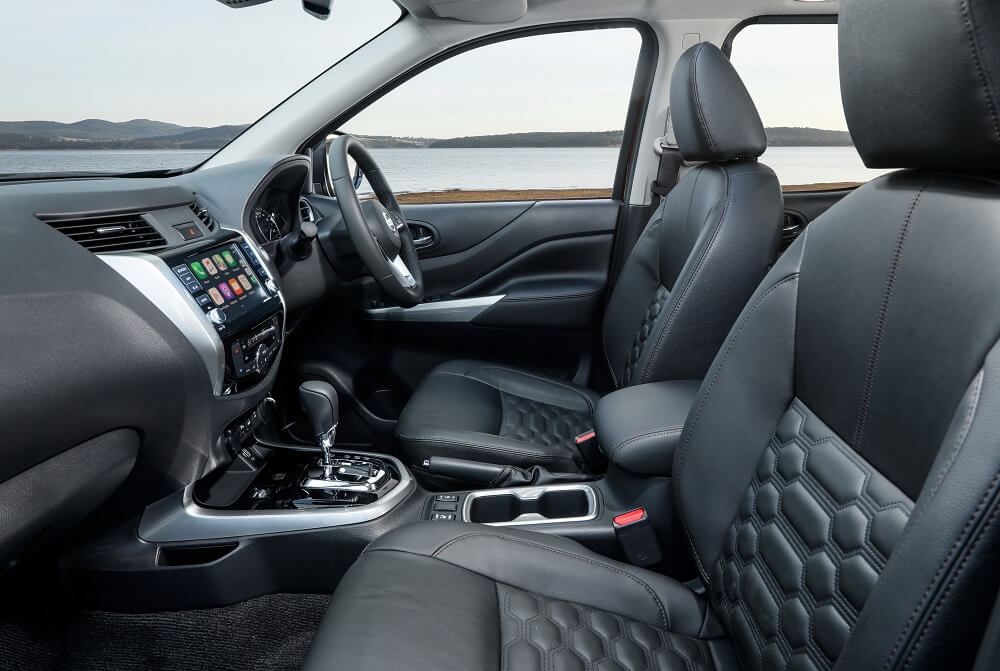 While our truncated drive route stopped short of providing a full test of the Navara’s capabilities, it’s fair to say that the changes combine to keep Nissan’s ute competitive with rivals including the Toyota HiLux, Ford Ranger, Isuzu D-Max, and Mazda BT-50.

Last year, the Navara finished sixth in the 4x4 ute category and these upgrades certainly do enough to keep it in contention and on buyers’ radars, with the main unknown being how consumers will react to the new PRO-4X variant (pictured below), which has the potential to be among the best sellers in the range.

While we didn’t get to drive it, the PRO-4X certainly looks the part, based as it is on a dressed-up STX Dual Cab, with a range of styling enhancements that differentiate it from the herd.

The black-out treatment also extends to the Nissan emblem, front bumper and grille, door handles, roof racks and running boards, with splashes of red accents inside and out for contrast.

While nothing in that lot meaningfully enhances the PRO-4X’s performance, aside from the tyres, waiting in the wings is a locally enhanced version of the PRO-4X, likely to be called the Navara Warrior.

Contrary to our earlier report that there would not be a locally enhanced Navara Warrior variant in the line-up, as advised by Nissan in November, we now understand that a new version is under development by Aussie aftermarket specialist Premcar. 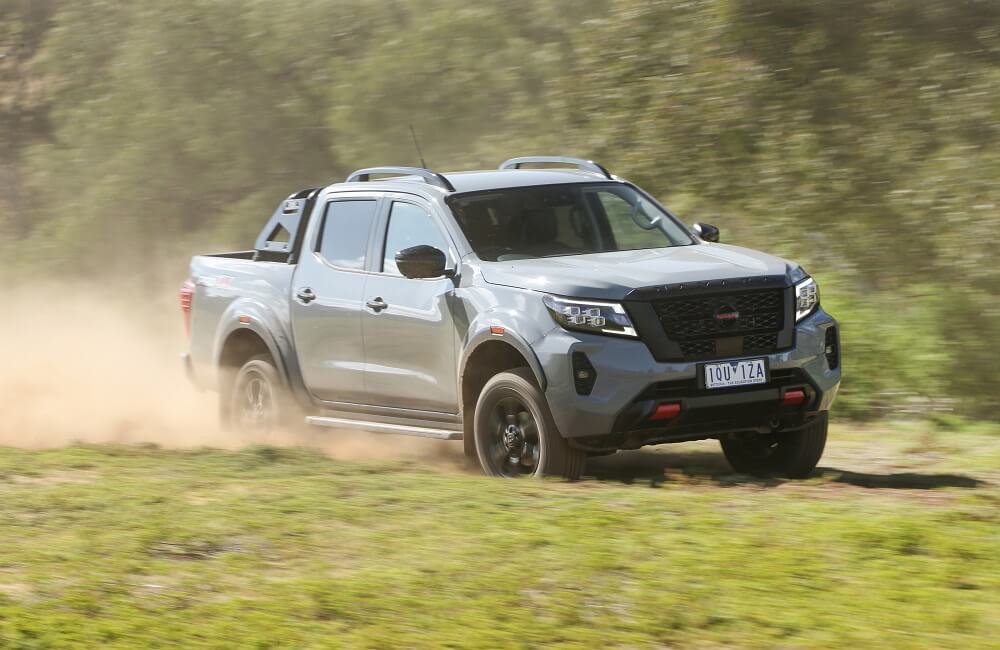 The new model will be based on the PRO-4X and will feature a range of suspension, body kit and other modifications, designed to further enhance the Warrior’s looks and off-road ability.

A Nissan spokesperson said the company needed to get sufficient volume of the donor PRO-4X model off the boats and into dealers before it can begin diverting cars to Premcar for the conversion.