The Germans take the high engineering ground with precision-built engines and drivetrains, as evidenced by the likes of Porsche and BMW.

The Italians are handy engineers too, but somehow also often imbue cars like Ferraris and Alfa Romeos with a passion that manifests in the styling, sound and driving experience.

The Japanese, meanwhile, focus on relentless improvements to quality and finely honed manufacturing processes that deliver well-built cars at affordable prices, such as those from Toyota and Lexus.

And then there’s the French, with their rich history of automotive innovation and a reputation for doing things differently, as seen in a revolutionary back catalogue that includes trailblazers like the Citroen 2CV, Citroen DS and the Renault Espace.

In both design and engineering the French have an approach to car making that sets them apart from rivals.

Despite this, and despite having been present in Australia for decades – Citroen was first brought to Australia in 1920, and in 1925 a Citroen 5CV became the first vehicle to complete a lap of Australia – French cars don’t have much of a profile in this market.

Indeed, for many Australians, French cars don’t even register, let alone make it into their consideration set, in a market dominated by Japanese, Korean and European car makers.

The relative lack of visibility of French automotive brands here is a real shame, because as anyone who has experienced modern French cars can attest, they often offer something decidedly different to their rivals.

Enter the recently updated version of the Citroen C3, a compact five-door hatchback that continues Citroen’s long tradition of doing things differently and in the process being a car that’s fun, quirky and undeniably endearing. This third-generation C3 was first launched in 2016 and since then has notched up 750,000 sales worldwide, including 59,000 sales last year in its home market where it finished the year as France’s fourth best-selling model.

Despite this, Citroen and the C3 are practically invisible in Australia, with May year-to-date sales statistics showing the brand has sold just 49 cars across its three models (C3, C3 Aircross and C5 Aircross).

But just as McDonald’s selling more hamburgers than other restaurants doesn’t mean it makes the best hamburgers, Citroen’s low sales here doesn’t necessarily speak to the qualities of its vehicles.

In fact, after a week spent at the wheel of the updated C3 Shine we can say with confidence that it deserves to do better.

The first thing that stands about the C3 is its styling with our test car boasting a handsome red over Polar white two-tone paint scheme, with the roof, door mirrors and flog light surrounds accented in a bold, glossy red.

Add to this the black wheel arch flares, distinctive 16-inch Helix alloy wheels and unusual blistered cladding on the front doors, and the C3 really stands out in a crowd.
Citroen calls the body side cladding Airbumps and has gone to the trouble of trademarking the idea, claiming that the design feature combines style with function by enhancing the C3’s looks and providing protection for the bodywork.

The bubble-like styling theme is carried over to the inside of the door skins and on to a series of air vents that spread horizontally across the dash.

In combination with shapely and impressively comfortable fabric-covered bucket seats, the interior has some real design flair.

It’s also a comfortable place to be, but marred slightly by some random switch positioning, such as the “Sport” switch for the transmission, buried almost out of sight in a nook down near the cupholder, and befuddling cruise control switchgear. Beyond these gripes, however, the instrumentation is clear and concise, with a simple speedo and tacho separated by a small multifunction digital display, complemented by an attractive low-set colour touchscreen that provides intuitive access to a range of vehicle menus.

Some of these features, notably autonomous emergency braking, were not fitted to the C3 in 2017 when it was tested and achieved a four-star ANCAP safety rating, so it may do better if tested today.

Something else that jumps out about the C3, aside from its stylish good looks, is its superbly plush ride quality.

Both Citroen and Peugeot had a reputation for building beautiful riding cars in the past and it’s pleasing to see Citroen at least hasn’t forgotten the art of tuning suspension for plaint ride, while maintaining good cornering composure.

The C3’s suspension is quite long-travel, so the little hatch leans a bit in corners, but the steering remains pleasingly direct, and the car holds its cornering line well with plenty of grip at both ends from the Michelin shod 16-inch alloys.

Under the bonnet is a 1.2-litre three-cylinder turbo making outputs of 81kW and 205Nm.

It’s not a lot but the C3 is relatively light at 1090kg so doesn’t need a lot of power, and the outputs are broadly competitive with the similarly priced and sized Audi A1 (85kW/200Nm) and Mini Hatch (100kW/220Nm).

The engine is quite characterful with a slightly off-beat note and impressive torque characteristics. 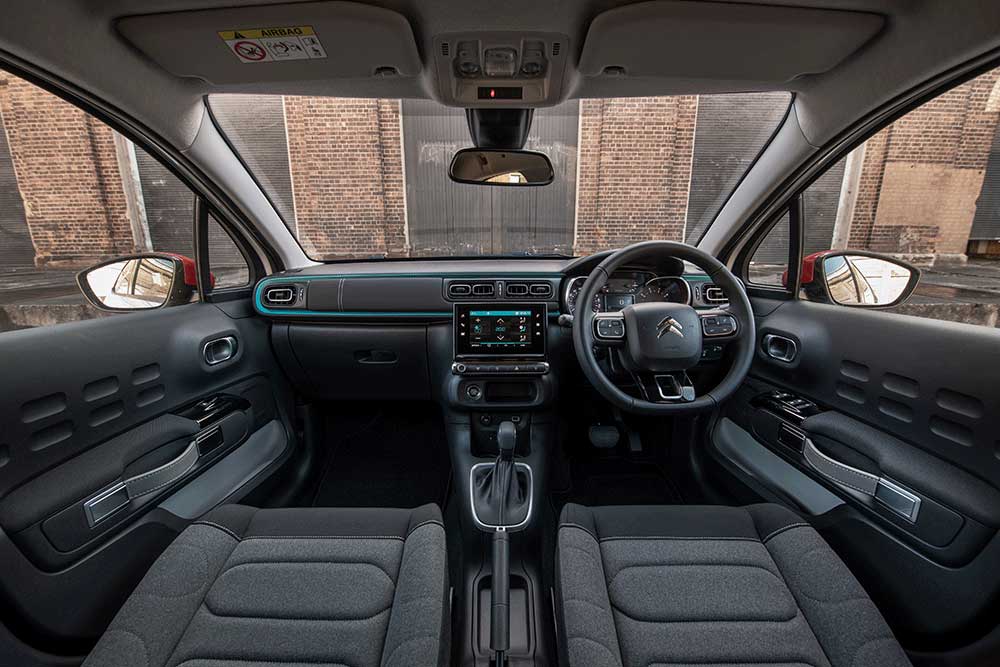 This is a small car, so two large adults in the front seats are going to become well-acquainted and the rear seats are best reserved for small kids or occasional use.

The engine red line is pegged at a relatively low 5500rpm, while the smooth-shifting six-speed auto is tuned to make use of the three-pot’s solid mid-range torque.

As a result, the auto upshifts early, meaning the powertrain can feel a little lazy unless you override it and drive manually.

Citroen’s says its target market for the updated C3 is “young urban creatives” who want to “express their individual personality,” and for this type of buyer the C3 is probably a great choice.

Its unique design and colourful personality will be perfect for someone wanting a vehicle that’s stands apart from the crowd and it back up its good looks with quite impressive driving manners.

There’s little doubt that the C3 Citroen deserves to find a bigger market here but a major challenge to that is its price, which at $28,990 is north of more affordable light car rivals such as the Toyota Yaris and Mazda 2, and in the same mix as the entry-level Mini Cooper Hatch ($30,750) and Audi A1 ($32,750).

It’s doubtful that Australian consumers see Citroen in the same prestige class as they do Mini and Audi, so unless Citroen Australia can find a way to sharpen “le crayon”, the cute quirky, and endearing C3 will likely continue to be an attractive oddity on our roads.