Mark Hinchliffe15/06/2021
Car Reviews and Advisory
Harley’s iconic Fat Boy demands riders have arms like Arnie to keep it on the straight and narrow. 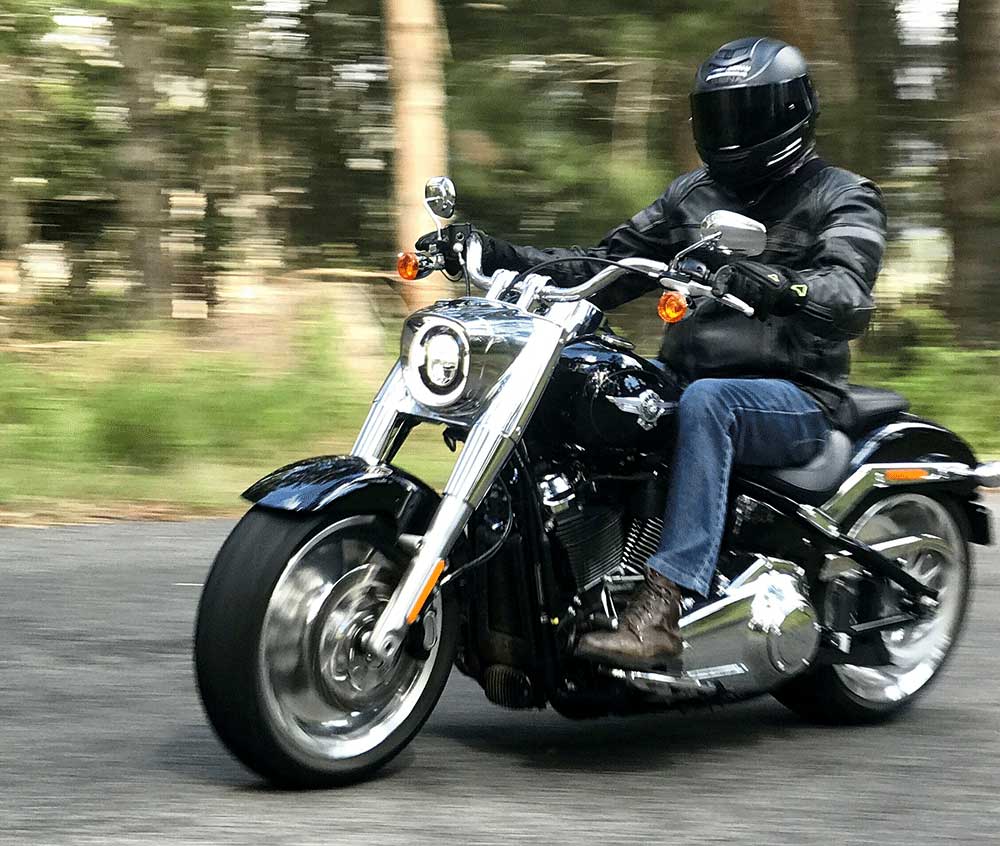 For movie buffs of a certain age, the image of big Arnie Schwarzenegger thundering through LA’s post-apocalyptic streets in black leathers and dark sunglasses astride a Harley-Davidson Fat Boy is forever seared into our collective cerebral cortex.

Through this and countless other appearances in film, television and print over the decades, it’s arguable that there is no motorcycle that plays such a role in 20th Century Western zeitgeist as the Harley Davidson Fat Boy.

Designed by legendary Harley stylists Willie G. Davidson and Louie Netz as a modernised version of the 1949 Hydra-Glide, the legendary hot rod model was introduced in 1989 as a 1990 model.

The next year, “Big Arnie” rode it to instant stardom in Terminator 2: Judgement Day, featuring the memorable chase scene with Arnie (or his stunt double, as it happens) and the bike performing a spectacular jump scene over LA’s open stormwater sewers.

Next to Steve McQueen’s leap for freedom from the Nazis over the barbed wire on a Triumph TR6 Trophy in 1963’s The Great Escape, it is probably the most famous motorcycle stunt in cinematic history.

While McQueen’s leap is better known, the jump in Terminator 2 is arguably the more impressive, given that Arnie’s stunt double Peter Kent is hanging on to 300-plus-kilos of bellowing chrome and steel, not a relatively light and nimble Triumph chook chaser.

But before we get too effusive in our praise for Kent’s efforts, let it be known that the celluloid Fat Boy was in fact supported by cables, so that when bike and rider landed back on terra firma, it was only about 80kg hitting the deck, with the cables later digitally erased. 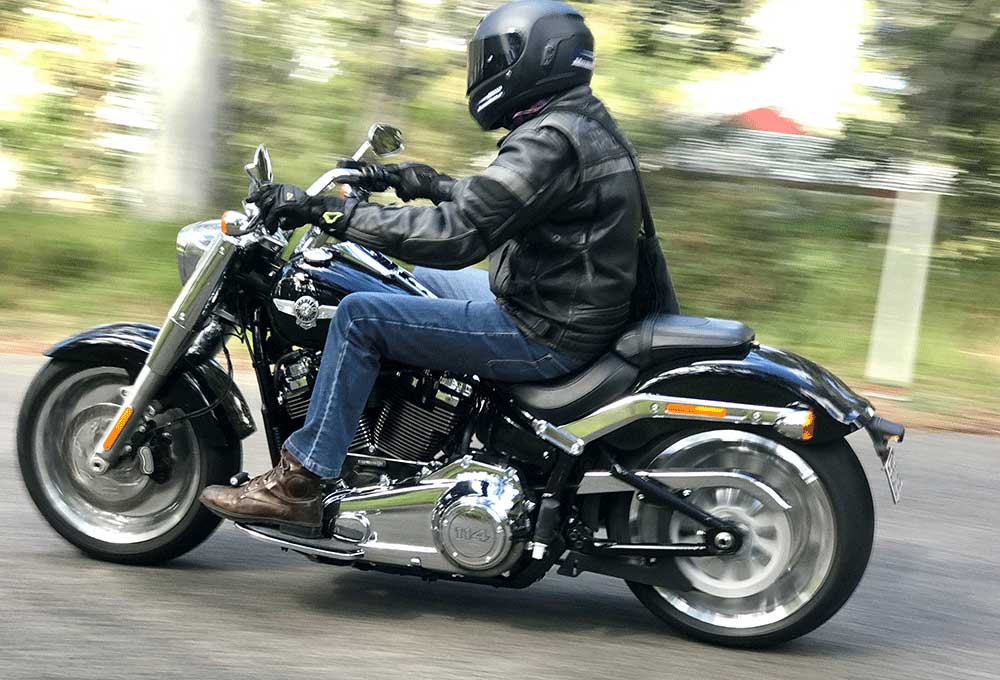 The Fat Boy also played an integral role in the marketing of Terminator 2, with posters depicting leather-clad Schwarzenegger straddling the bike and carrying his lever-action Winchester shotgun. It’s an image for all time that has not only bestowed the Fat Boy model with intrinsic cultural value, but a monetary one to boot.

As they say in marketing circles, you can’t buy that sort of publicity and since bursting onto the silver screen more than three decades ago the Fat Boy has gone on to establish itself as one of Harley’s best sellers both here and abroad.

But just because you’re popular doesn’t mean you can survive unchanged and in 2017 Harley made some major changes to the Softail range, reducing weight, improving the suspension, introducing new and stiffer frames, and releasing bigger Milwaukee Eight 107 and 114 engines.

The wider frame accommodates the massively wide 240mm-section rear tyre that has become such a distinctive feature of the Fat Boy.

For 2021, the Fat Boy has again received an update, albeit one that’s less significant, stretching to minor styling changes and deletion of the less-popular 107 engine, meaning the bike now comes only with the Milwaukee Eight 114 powerplant.

The 1868cc four-stroke, air-cooled, V-twin features four valves per cylinder and serves up its muscular 161Nm in effortless fashion. Otherwise, only rusted-on Harley tragics will notice the styling changes, which include some cosmetic changes, the introduction of a wet-weather sock on the hi-flow air filter, and a digital fuel gauge in the main instrument pod that replaces the analogue dial on the fuel tank cap.

Traditionalists probably won’t like it because, well, they’re traditionalists, but the old gauge was difficult to read.

While that’s a win for anyone who prefers to know how much fuel they’ve got left at any time, a less-popular change will be the deletion of cruise control from the previous S variant.

It’s a style that undoubtedly turns plenty of heads and has its steadfast fans, but it also poses questions among some riders as to whether it’s a case of form winning out over function?

There’s no disputing that the major chassis and powertrain changes of 2017 have improved the Fat Boy’s function, to a degree.

But the Fat Boy’s massive 240mm-wide low-profile rear tyre is never going to work well on anything but baby-bum smooth bitumen. 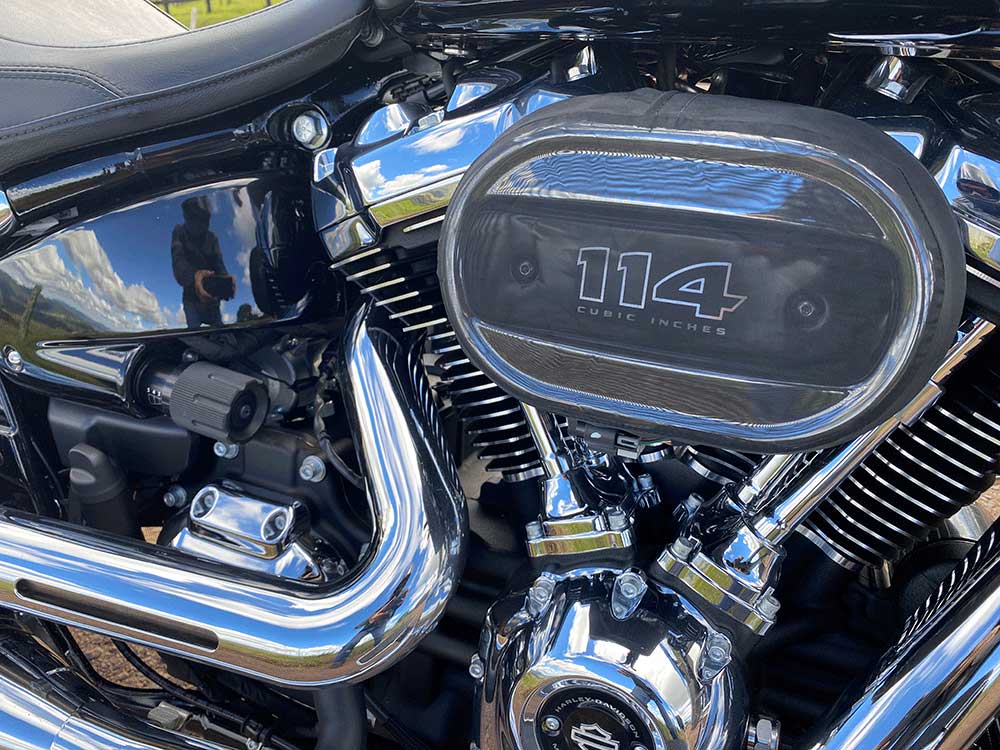 The low-profile reduces the amount of cushioning the tyre gives, resulting in a harsh ride and negating some of the benefits of the improved rear shock.

And you need biceps like Arnie to counter steer and hold the bike on its cornering line, as the flat-profile tyre constantly wants to fight back and stand the bike upright.

We’ve all heard the adage that Harleys can’t go around corners, but in my experience that’s rubbish.

Many modern Harleys handle quite well, albeit with limited cruiser-style clearance issues. But the Fat Boy also has issues riding in a straight line on anything less than perfect road surfaces.

This all conspires to make a ride on the Fat Boy like an arms-session at the gym, meaning an unnecessarily tiring experience.

It’s true that with my modestly proportioned wings I’m probably not the target audience, anyway, but perhaps the Fat Boy’s real appeal likes in the idea that you need to muscle up to ride it, just as Arnie did so magnificently back in the day.