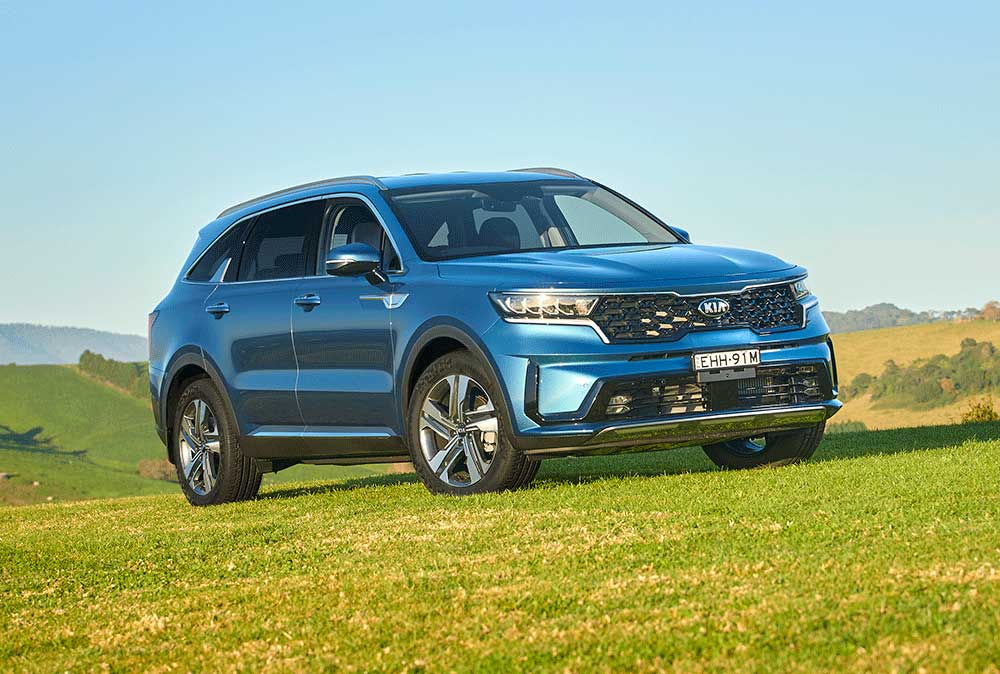 While we didn’t get to tick off each of the Sorento’s claimed improvements during our week-long test drive, we can confirm those above, as well as the fact it’s more spacious, better finished, better to drive and, in our view, better looking.

On test is the new Sorento Sport+, which sits just below the pair of range-topping GT Line models in the two-engine, four trim levels and eight-variant model line.

The Sorento is the first new Kia based on the Korean car maker’s larger, stronger and stiffer N3 SUV platform.

Along with the safety and handling benefits of the new platform, the Sorento is also freshly styled and boasts a larger body with more cargo space.

Under the bonnet in each of the four spec levels (S, Sport, Sport+, GT-Line) is the choice of two new “SmartStream” powertrains – a four-cylinder turbo diesel and petrol V6.

Mated to a new eight-speed, wet double-clutch automated transmission, the engine drives through a part-time all-wheel-drive system with lock mode. 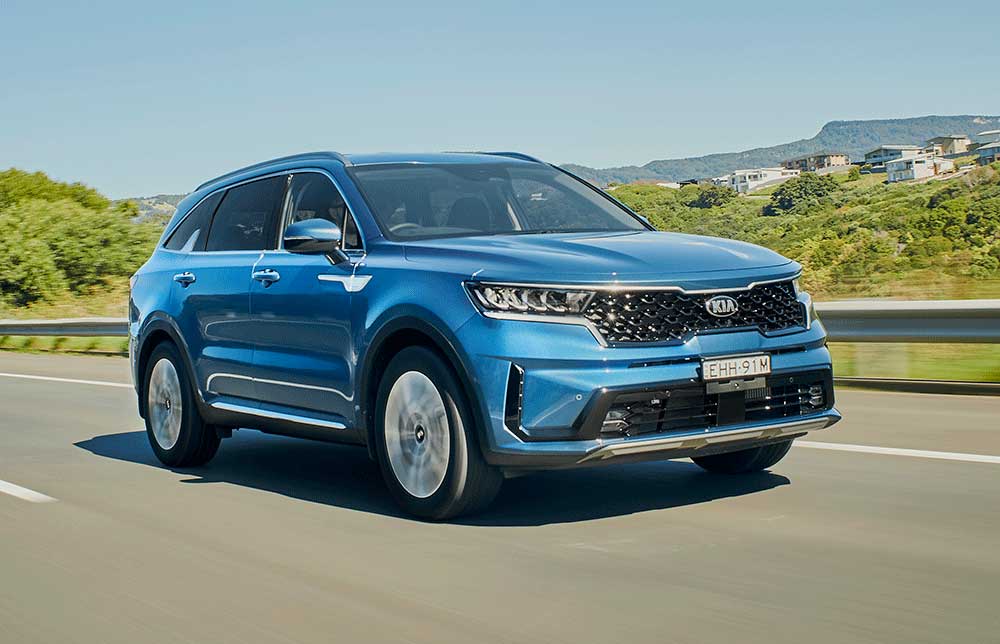 The revised and refined Lambda III V6 benefits from engineering tweaks to improve its fuel efficiency by 3% over the old model with Kia claiming a combined cycle figure of 9.7L/100km on regular unleaded.

Our test average for a combination of city and spirited back roads driving settled at 13.0L/100km.

Not surprisingly, the diesel models sip less fuel than their V6 equivalents but any notion that they might represent a less-expensive ownership proposition needs to be balanced with the fact that they cost $3000 more than their petrol equal.

For buyers looking for something more economical than either of these two options, Kia has confirmed that a plug-in hybrid Sorento is scheduled for local release by the end of the third quarter this year with a hybrid electric model to follow in the first half of 2022.

Meanwhile, back with the petrol V6, which is smooth and purposeful, offering plenty of grunt on tap to spur the family-sized SUV up to speed.

On harder acceleration it can struggle to find enough grip to get its power to the ground.
That familiar tugging on the steering wheel known as torque-steer also shows its ugly face at times.

However, if you are one of the many Sorento buyers wanting to tow, you’ll be pleased to learn that Kia has uprated the tow-ball download on all current versions to 200kg (with a genuine Kia towbar), up from 100kg on the old model.

There is no increase to the maximum braked towing capacity, though, which remains at 2000kg.

The Sport+ interior lacks some of the high-flying GT-Line’s niceties, such as 64-colour mood lighting and quilted Nappa leather trim, but still offers a sophisticated look and premium feel. 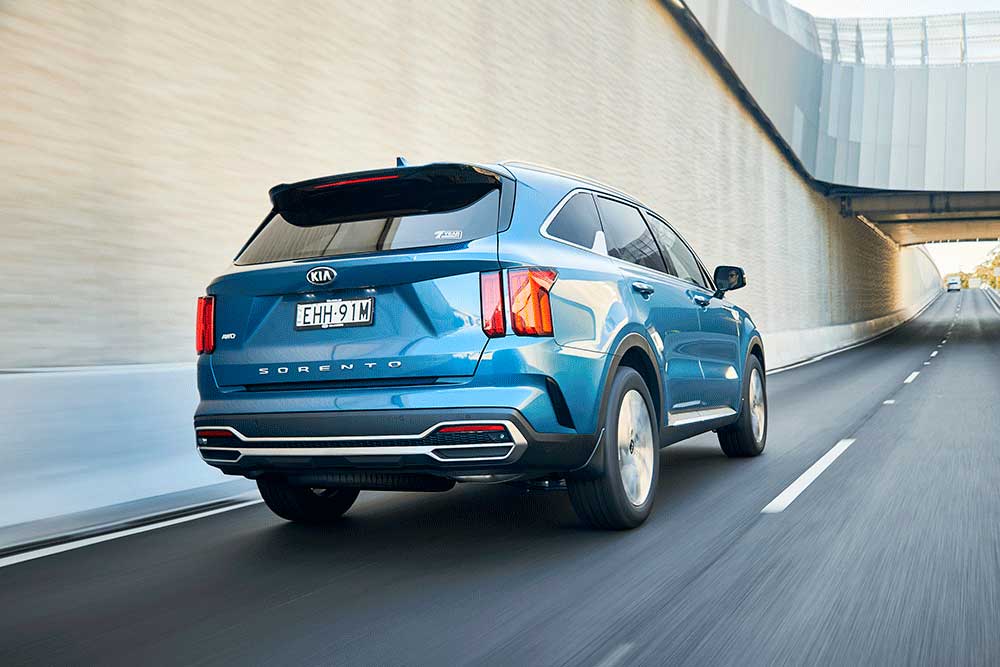 Other standard inclusions are heated front seats with 10-way power adjustability, including lumbar support for the driver.

Passengers in the sliding second row also miss out on the GT-Line’s seat heating but are otherwise well catered for with generous space and, in the outer positions at least, decently comfortable pews.

A too-firm and narrow backrest in the centre spot makes it a less desirable destination.

The third row is reasonably easy to access with switches incorporated on the outside of the second-row seat cushions to tilt and slide the row.

Access is convenient for kids, which are the most appropriate passengers for the fold-away rearmost row.

There’s plenty of other well-considered practical and family-friendly touches throughout the big wagon.

They include no less than five child-restraint points in the two rear rows – something you won’t find on many other seven-seaters.

The outer two seats in the second row are also ISOFIX capable.

USB ports in all rows will be popular with the smartphone generation along with eight cup holders, dual-zone climate control with vents for all rows (and third-row fan control), hands-free smart power tailgate and a full-size alloy spare wheel.

Over and above this, the GT-Line adds second-row window sun blinds, inductive phone charging, a 12-speaker Bose audio system and an innovative Driver Talk in-car intercom system that allows the driver’s voice to be played through the rear speakers to help maintain public order.

In all grades above the entry S model, infotainment is covered off with a 10.25-inch touchscreen nav and infotainment system. 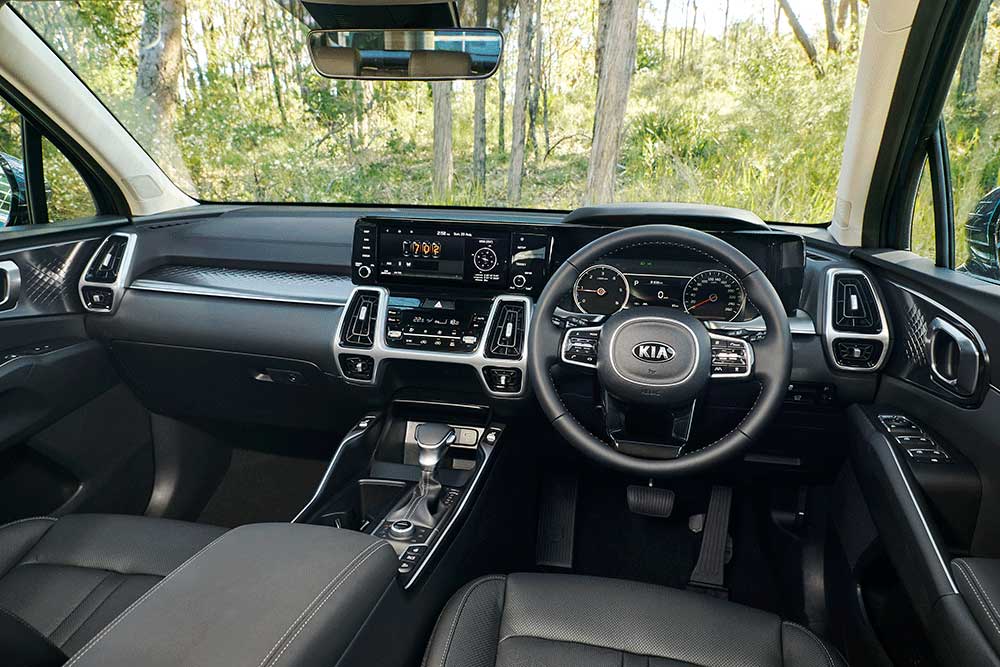 The standard audio system across all models, other than GT-Line, is a six-speaker unit with digital radio, Apple CarPlay and Android Auto.

The new Sorento ups the ante on the standard safety and advanced driver assistance technology front too, something sure to appeal to family buyers.

There’s a lengthy list of standard items across the model range including front centre airbags which Kia claims as an Australian first for this segment.

Other safety features include safe exit assist, which detects vehicles approaching from the rear and provides a visual and audible warning to help prevent a door being opened and causing a collision.

Parents will no doubt appreciate its safety potential, especially for younger members of the brood exiting the vehicle.

Reserved for the generously equipped GT-Line flagship is remote smart parking assist, which enables drivers to remotely start and move the vehicle in or out of a parking slot from outside the vehicle, using only the key fob.

It’s designed to allow parking or exiting of parking spaces too narrow to allow cabin entry or exit. Braking is auto applied if the system detects an obstacle.

On the road, the big Kia delivers an engaging drive experience by class standards, thanks to its appealing blend of comfort and capable road holding.

Summing it up, the impressive new Sorento rarely puts a foot wrong and on that basis, is certainly worthy of making the short-list of buyers in the highly competitive seven-seat large SUV market.