Ged Bulmer09/09/2021
Car Reviews and Advisory
Mazda gets aboard the electric vehicle bandwagon with a quirky new model that’s high on price but short on range. The MX-30 is Mazda’s first production electric vehicle (EV) and follows hard on the heels of a hybrid version of the same model launched in April.

The EV features the same cutting-edge design as the hybrid, including “freestyle” rear doors and a five-star ANCAP rating courtesy of 10 airbags, radar cruise control with stop-and-start and smart brake support function.

Offered initially in a single high-grade Astina specification, the MX-30 E35 goes on sale in late August, priced at $65,490 plus on-roads.

That’s after Mazda finishes training its dealerships in EV service and repair.

Not that they’re likely to be run off their feet, given the entire country’s initial allocation is just 100 cars.

Mazda executives at the recent launch admitted they had placed their supply bets before the recent EV-incentive announcements from the New South Wales and Victorian governments and may have been more bullish had they known of those changes.

Like most car makers, Mazda is busily reimagining itself and its product line-up as a champion of sustainability.

The brand has already committed to having 25% of all new models globally as pure EVs by 2030, with all other new models to have some form of electrification.

The brand has also committed to having five hybrids, five PHEVs and three EVs here by 2025.

Managing Director of the Mazda’s Australia operations Vinesh Bhindi said unlike brands such as Audi, which have set an end date on combustion engine development, petrol and diesel models will continue to be part of its model mix for the foreseeable future.

Mr Bhindi said Mazda believed internal combustion will remain predominant in places like Australia for some time to come, so will continue investing in high-efficiency combustion engines as well as mild hybrid, plug-in hybrids (PHEVs) and EVs.

It’s possible the MX badge on this new model’s rump might confuse some readers, who connect it exclusively with the MX-5 sports car.

However, Mazda points out MX stands for “Mazda experiment” and has been used before on other models, including the MX-6 coupe, manufactured between 1987 and 1997. 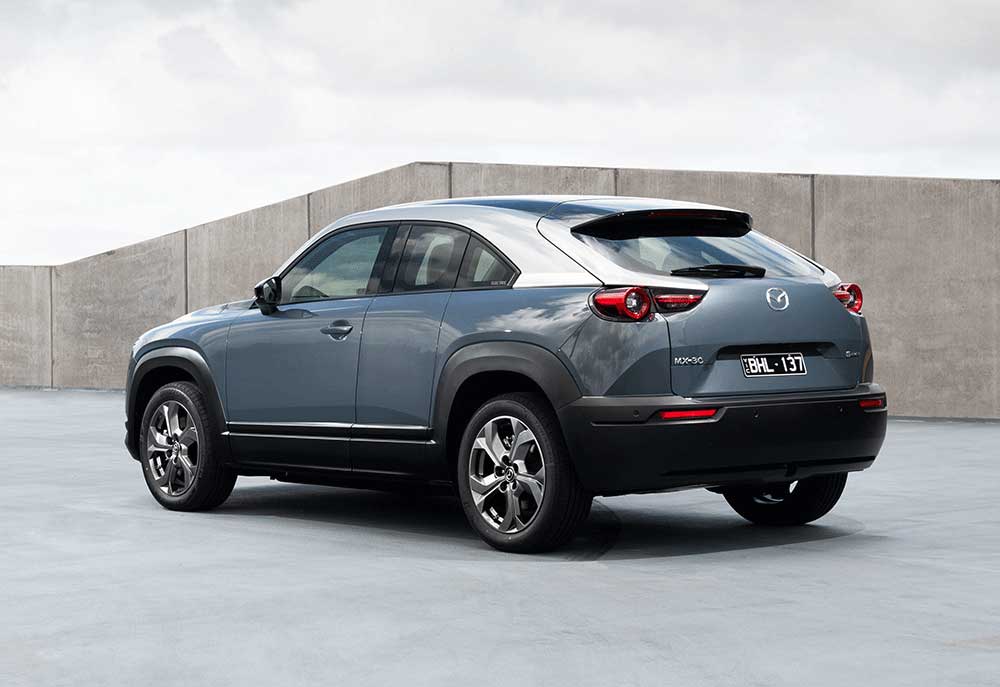 Any vehicle with the MX name on its flank needs to be extra special and needs to innovate, according to Mazda, so the MX-30’s electric powertrain and unusual reverse opening freestyle doors tick that box.

While the doors might be seen as a nostalgic nod to the innovative RX-8 sportscar, Mazda said they also had a practical benefit in contributing to better rear-seat access and an airy cabin ambience.

Another benefit of the clean B-pillarless construction is that it’s incredibly strong, said Mazda, pointing to extensive use of ultra-high-strength steel throughout the body with the freestyle doors creating a virtual B-pillar when closed for better side impact.

An impressively high five-star ANCAP rating appears to back this up.

While the freestyle doors do endow the MX-30 with more practicality than a traditional two-door, and are undeniably stylish, they’re simply not as practical as a conventional four-door setup.

Getting into the rear seats requires the front doors to be first opened, then the rear door can be opened via a catch mounted on the B-pillar.

Once opened, access is certainly easier than in a coupe.

Inside the cabin, a careful approach to materials is intended as a nod to sustainability, including a thin layer of “sustainably sourced heritage cork” on parts of the centre console, an undefined quantity of recycled PET materials, and a “vintage leatherette” upholstery that is synthetic.

Along with an open-weave fabric on the seats and door trims, the overall effect is classy and interesting, even if I remain sceptical about how a few millimetres of cork atop an under-layer of traditional automotive plastics will help save the planet anytime soon.

Other interior design elements include a driver-centric cockpit design, with stylish floating centre console incorporating a touchscreen for the aircon functions, and another low-set screen atop the well-designed and nicely finished dash for entertainment, navigation and so forth.

Connecting devices is nice and simple while the overall ergonomics and navigation of major controls is clear and logical.

Technically, the MX-30 features a 35.5kWh lithium-ion battery pack, a synchronous electric motor and a single-speed reduction gear, putting its 107kW/271Nm to the front wheels for a combined cycle range of 224km. If you’re thinking that range sounds a bit skinny, you’d be right.

Despite this, Mazda describes the MX-30’s battery as “right-sized” for its predominantly urban target market and naturally prefers to focus on the positives of a smaller battery, including a lighter kerb weight, potentially superior dynamics and speedier charging time.

In a valiant effort to turn an apparent weakness into an advantage, Mazda’s PR folk cite a “well-to-wheel approach”, whereby the Japanese parent company deliberately chose to not build a big, heavy EV with an over-sized battery and that the MX-30’s smaller battery demands less resources both in manufacture and end-of-life recycling and disposal.

However, one can’t help but feel that Mazda is swimming against the EV tide here, since practically every other manufacturer aspires to ever greater range.

On the charging front, the MX-30 can be charged with both AC and DC charging technology and comes supplied with an AC domestic charge cable.

Using 2.4kW AC domestic power, charging from 20-80% will take about nine hours, while using a 6.6kW AC wallbox for the same charging window reduces that to three hours.

The same charge on a public rapid 50kW charge station takes about 36 minutes.

Interestingly, unlike Mercedes-Benz and Tesla, who have made the sale and supply of branded home wallboxes part of their business model, Mazda has no such plans.

Mr Bhindi said there were now plenty of suppliers in the market and the company is happy for people to choose who they get their wallbox from.

An unusual night-time drive program around the Melbourne CBD and inner suburbs showed the MX-30 to be a more-than-competent urban runabout.

It’s comfortably appointed interior is a nice place to spend time, with performance and dynamics befitting the Mazda brand.

As we’ve come to expect from EVs, off-the-mark and rolling acceleration is impressively strong, with enough torque on tap to break traction at the front wheels if you’re over-zealous with what Mazda calls the “electric motor pedal”.

You or I would call this an accelerator, but the fact this pedal also operates the regenerative braking system means it’s no longer strictly that. The MX-30 has five levels of regenerative braking, activated via steering wheel-mounted paddles, which both slow the car and provide a modest amount of battery recharge.

The highest level isn’t as aggressive as we’ve driven in some other EVs but will still slow the car quite rapidly when you lift off the pedal.

At the other end of the spectrum, there are two coasting modes that allow the MX-30 to glide with less friction in the drivetrain.

Mazda has also chosen to endow the MX-30 with an unusual fake soundtrack, which is played through the Bose audio system and designed to simulate the sound of drivetrain load in an ICE vehicle.

It’s subtle and can be deactivated if you don’t like it.

Ride and handling are up to Mazda’s usual high standards, at least as best we could tell from the limited drive program.

The positioning of the battery keeps weight nice and low and contributes to enhanced grip and cornering ability through a reduction in body roll.

The steering is also pleasingly responsive, the combination ensuring the MX-30 drives with a decent amount of panache.

This is an impressive, if slightly tentative, first step into the brave new world of electric vehicles for Mazda.

The MX-30 E35 is a good-looking vehicle with above-average styling and finishes, decent dynamics and a generous list of safety and convenience features that go some way to justifying its comparatively high price tag.

However, as with other EVs that have an ICE equivalent, the $15k price premium over its petrol-powered stablemate, the MX-30 G20 Astina, is a steep ask, especially given the modest range.

Despite this, we’re confident that the limited number of vehicles available, coupled with Mazda’s brand pulling power, the unusual design and otherwise impressive all-round performance of the MX-30 E35 will see it find the requisite number of happy owners.