John Ewing07/09/2021
Car Reviews and Advisory
Nissan adds timely updates to keep sales of its X-Trail medium SUV ticking over ahead of an all-new model in 2022. Keeping an ageing model soldiering on until the next big thing arrives isn’t just something fashion houses and film studios have to worry about – it’s a “thing” for the car industry as well.

Selling something bright, shiny, and new is possibly the easiest day’s work a marketer will ever do. But when that something is getting a bit long in the tooth, like Nissan’s third-generation X-Trail SUV, which first arrived in March 2014, the challenge gets that much harder.

The automotive solution usually involves car makers reaching into their bag of tricks to sprinkle some extra features and styling upgrades over the vehicle, possibly even sharpening the pricing pencil while they’re at it.

In the updated MY21 X-Trail, there’s a fair bit of the former but none of the latter, with the refreshed model range attracting price rises of between $475 and $675, grade dependent.

Nissan has also taken the opportunity to rationalise the X-Trail range, with the TL diesel AWD, N-Trek and N Sport variants all retired, leaving buyers to choose from nine models.

What you get for that modest amount of extra coin are added safety features, updated infotainment systems and, on ST-L variants, some spiffy new 18-inch alloys (up from 17s). 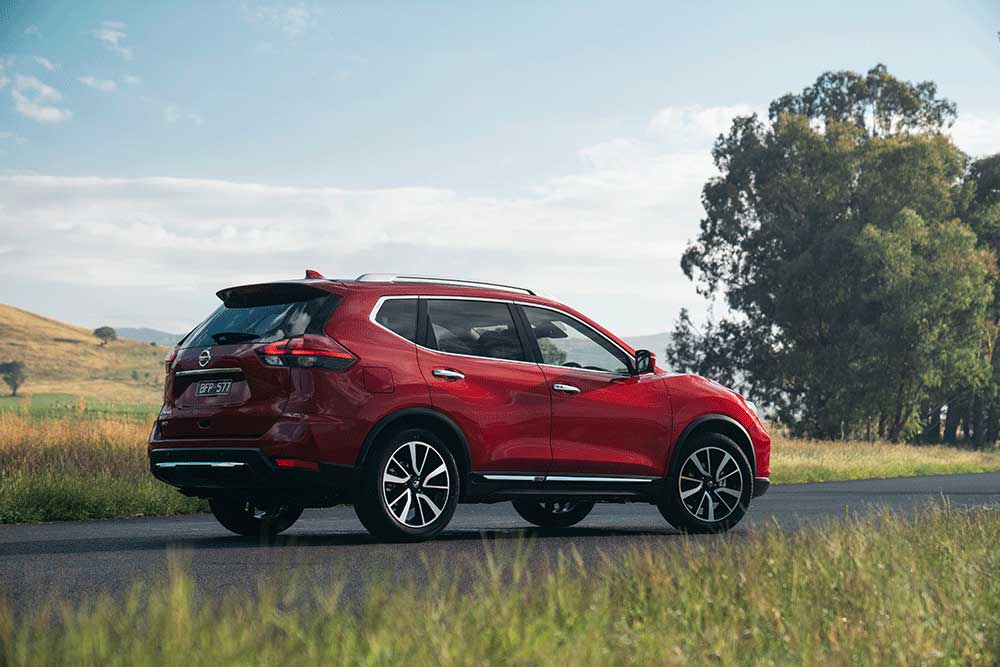 Buyers wanting turbo-diesel instead of petrol power are limited to a single model, the 2.0-litre TS AWD auto, costing $37,465.

Other X-Trails are petrol-powered, with the bulk of the range featuring a 2.5-litre four-cylinder engine married to a CVT auto, while the entry ST manual diverges from the script with its 106kW 2.0-litre four-pot.

The naturally aspirated 2.5-litre’s 126kW/226Nm maximum outputs won’t spook hot hatch owners at the traffic lights, but it’s a willing enough unit that’s easily capable of staying the course with urban traffic or cruising on the open road with enough in reserve for competent passing manoeuvres.

The engine’s relaxed qualities carry over to the Ti’s road manners, which cope well with most surfaces, even on the larger 19-inch wheel and tyre package.

It’s not as plush as rival Subaru’s Outback, but it’ll satisfy most owners. 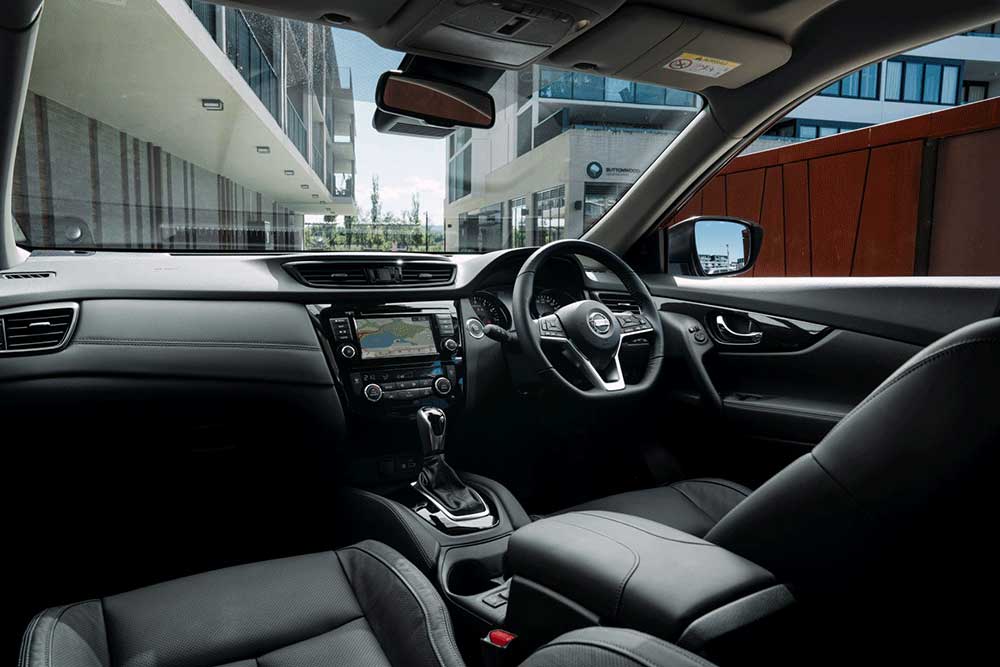 The comfortable ride is backed up by pleasantly weighted steering and secure, predictable road holding.

But, while it’s all perfectly competent, the X-Trail lacks the dynamic edge of more polished rivals, such as Mazda’s CX-5.

The X-Trail makes a more positive impression via its spacious cabin, which includes a sliding second row of seats to help optimise passenger and load space as required.

Seat heating is standard up front and for passengers in the outer rear positions, while an almost flat floor allows for better foot space for the centre rear passenger.

A usefully proportioned 565 litres of cargo space is accessed via the Ti’s motion-activated power tailgate, expanding to 945 litres when the split rear seat is folded.

A simple but clever design on five-seat models is a two-piece cargo-area floorboard that can provide under-floor stowage or be installed vertically to act as a load partition.

Nissan calls this feature “Divide-N-Hide”, and it’s perfectly proportioned for storing groceries or even a few cartons of drink. 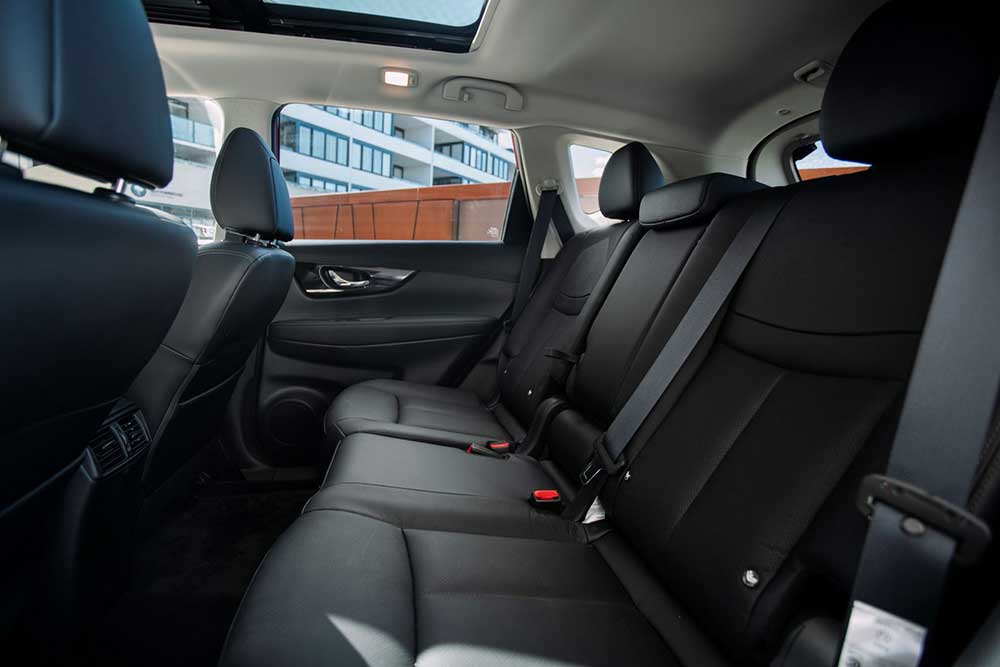 As part of the MY21 revisions, DAB+ radio, voice recognition and Nissan’s Next-Generation infotainment with Apple CarPlay and Android Auto become standard across all grades.

At the system’s heart is a 7.0-inch touchscreen with updated graphics.

It’s all easy enough to use, although the screen size is smaller than some of its newer competitors. An eight-speaker Bose audio also comes standard on Ti models.

The suite of driver assistance and safety technology on both the mid-spec ST-L and more comprehensively equipped Ti has been expanded to include Intelligent Driver Alert, which monitors driver inputs and recommends a break when it detects signs of fatigue.

While the new generation X-Trail is just around the corner, the current car must be doing something right as it’s the third-best seller in the under $60k medium SUV segment and one of Nissan’s most popular models.

These latest revisions, small though they are, won’t do the X-Trail’s buyer appeal any harm and should keep sales ticking over until the inevitable runout deals emerge before the launch of the new model sometime in 2022.