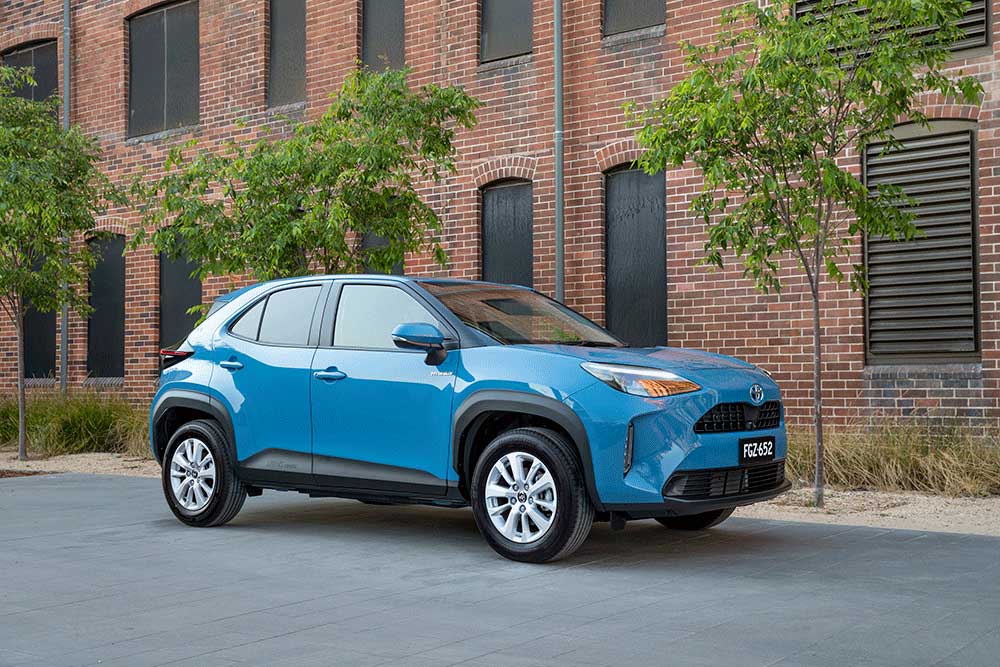 Specifically, it’s the company’s first foray into the light SUV segment; the first time an SUV has worn the Yaris nameplate; and the first vehicle in its class to offer a hybrid powertrain.

With nine variants, the compact Yaris Cross SUV offers buyers plenty of choice in how to go
about their motoring.

It can be had as a 2WD with either a petrol or hybrid-petrol drivetrain or as an AWD with hybrid powertrain only.

Whichever configuration you choose, the Yaris Cross can also be had in a choice of three grades – GX, GXL, and Urban – with a price spread of $26,990-$37,990. This makes it slightly more affordable than Toyota’s other small SUV, the C-HR.

Underpinning the Yaris Cross is the same GA-B Toyota Global Architecture platform as the Yaris hatch, albeit with a slightly widened track and stretched wheelbase.

Ride height has also been jacked up by 20mm to 170mm, for additional underbody clearance.

That’s not to say the Yaris Cross is any sort of a bush basher, but with switchable drive modes including Normal, Snow and Trail, plus a hill descent control system, the AWD models offer enough capability for mild forays off sealed roads.

But where 2WD models have a torsion beam rear suspension, AWD versions use a more sophisticated two-link double-wishbone arrangement, to better allow for off-tarmac use and accommodate the AWD system.

In the case of the GLX AWD driven here, we think most buyers will give the nod of approval to its supple, comfortable, and mostly composed ride qualities.

The Yaris Cross isn’t a car with sporty pretensions and that’s how it shapes up on the road. With its agreeably light steering and safely predictable road holding, it’s an easy car to drive and one the mainly urban-dwelling target audience should feel right at home with.

Petrol models are powered by the same 1.5-litre, three-cylinder engine as used in the Yaris hatch, mustering 88kW/145Nm and matched to a CVT auto with 10-speed manual sequential shift mode.

Official combined cycle fuel consumption of 5.4L/100km is decent but still the least fuel-efficient of the line-up.

In the case of the 2WD hybrid that means a 67kW, 1.5-litre Atkinson cycle three-cylinder petrol engine plus a pair of electric motor/generators with maximum outputs of 85kW.

Official combined cycle fuel consumption for the 2WD hybrid is a frugal 3.8 litres/100km.

In AWD models, traction in slippery conditions is taken care of by the addition of a third electric induction motor/generator at the rear axle that generates 3.9kW of maximum power and peak torque of 52Nm.

Peak combined power is the same 85kW as the 2WD hybrid, but fuel consumption rises to 4.0L/100km.

At speeds under 46km/h the hybrid can run for limited distances in near-silent electric-only mode, courtesy of its 4.3Ah high-voltage lithium-ion battery.

There’s no plugging in to recharge, with battery charging taken care of by the on-board motor-generators.

An on-board power-flow and energy monitor helps the driver keep track of things if you’re that way inclined. 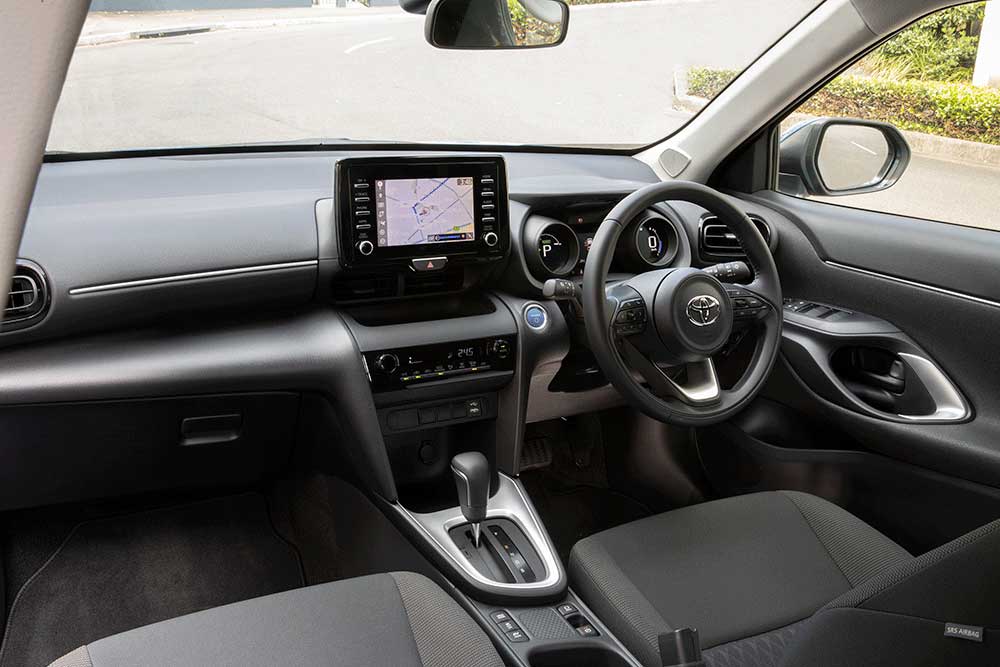 Performance around town is likeable and well up to the cut and thrust of city traffic.

However, open road passing needs some pre-planning since it’s more a case of the Yaris Cross building speed than of eager acceleration.

The three-cylinder engine is on the rowdy side, too, and could be more subtle when it kicks in to assist propulsion.

The rear seat features a handy 40/20/40-split and folds flat for additional load space when required.

There’s also a two-level 60/40-split deck-board in the cargo area of 2WD versions that allows for 390 litres of cargo space when in its lower position.

In the upper position and on AWD models, there’s 314 litres of space, which is slightly more accommodating than the Yaris hatch’s 270 litres.

We didn’t test the claim, but Toyota says with its rear seat folded, the Yaris Cross can accommodate two mountain bikes sitting upright with their front wheels removed.

Top-spec Urban models also have the convenience of a power tailgate with a kick-sensor for handsfree opening.

The cargo area of 2WD models also houses a space-saver spare wheel, but AWD models get an even less practical “mobility kit” (compressor and sealant) in lieu of a spare wheel.

While that may be only rarely an inconvenience, the absence of power sockets, USB ports or air-conditioning vents for second-row passengers is likely to be frowned upon more often.

Up front, driver and passenger in all models have access to Apple CarPlay and Android Auto, AM/FM/DAB+ radio, Bluetooth, and a selection of myToyota apps, including Waze and Stitcher for iOS and WebEx for Android.

The interior is all neatly assembled in typical Toyota fashion but with the widespread use of hard-looking plastic trims and virtually no soft-touch surfaces, it has a more utilitarian feel than some competitors. Included in the airbag count is a first-in-class centre-front-unit that helps reduce passenger and driver impact during a crash.
Moving up the model hierarchy means additional items from the Safety Sense suite are provided.

In the case of the GXL, that means front and rear parking sensors, parking support brake, blind-spot monitor, rear cross-traffic alert, and panoramic view monitor, over and above the standard GX offering.

Independent safety testing authority, ANCAP, haven’t yet rated the Yaris Cross, though the Yaris hatch has achieved a maximum five-star rating (2020) on all versions.

The Yaris Cross is also the first model offered locally with Toyota Connected Services, which is a complimentary inclusion for the first three years.

This feature employs a data communication module that, in the event of a collision that requires intervention or an airbag deployment, automatically generates an SOS emergency call to a 24/7 Toyota Emergency Call Centre, relaying the location of the vehicle.

The driver can also use the system to manually request emergency assistance via an SOS button and the system can help if the vehicle is stolen by providing authorities with tracking location details.

Toyota’s warranty on the hybrid battery pack is five years/unlimited kilometres, though that can be extended up to 10 years/unlimited through annual battery health checks during dealer servicing.

The capped price service program sees each of the first five services costing a budget-friendly $205.

Toyota started down the hybrid road nearly 20 years ago with petrol-electric models now accounting for close to one third of its local sales.

Aussie buyers are obviously comfortable with the technology and convinced of its fuel-saving and environmental attributes.

Based on this, we can see no reason why the availability of hybrid models in the Yaris Cross light SUV range will be seen as anything but a welcome addition.