The name of this Australian electric midi-bike may reference the star of a classic US sitcom set in the '50s, but this is a thoroughly 21st-century machine. That’s right folks, Henry Winkler, the actor who played Fonzie or ‘The Fonz’ in the hugely successful Happy Days TV series even crashed his bike several times during shooting, said he found Harleys too heavy to handle and blamed his inability to co-ordinate clutch, brake and throttle on his dyslexia.

If only the Brylcreemed bad boy had access to Doc Brown’s time-traveling Delorean from the ’85 sci-fi hit Back to the Future. He might have travelled from 1950s Wisconsin to Sydney, Australia, circa 2022, where he could have and swapped the heavy Harleys and Triumphs for a lightweight Australian-made electric motorcycle named in his honour.

The Fonz NKD is a mid-sized hybrid scooter/motorcycle with twist-and-go automatic transmission and a kerb weight of just 103kg.

That’s about 30kg less than the 1949 Triumph Trophy TR5 that Fonzie rode in Happy Days, so surely a bike the dyslexic Henry could handle.

The entry-level NKDa is a city commuter bike with a top speed of 80km/h and 50km of range.

The other models in the Fonz range, the NKD+ and NKDx, also have a 100km/h stop speed but increased city range of 150km and 200km respectively.

In case you’re already reaching for the cheque book, it’s worth noting that you can’t buy a Fonz off the showroom floor, but instead must order the machine and wait about three months for it to be assembled to your specifications.

Selecting specific options such as different tyres, saddle and handgrip combinations all increase the price, but included in the base price are contactless ignition, phone charger, LED lights, adjustable footpegs and even reverse gear.

While the NKD is diminutive by comparison with most motorcycles, it is neither a minibike nor a monkey bike. 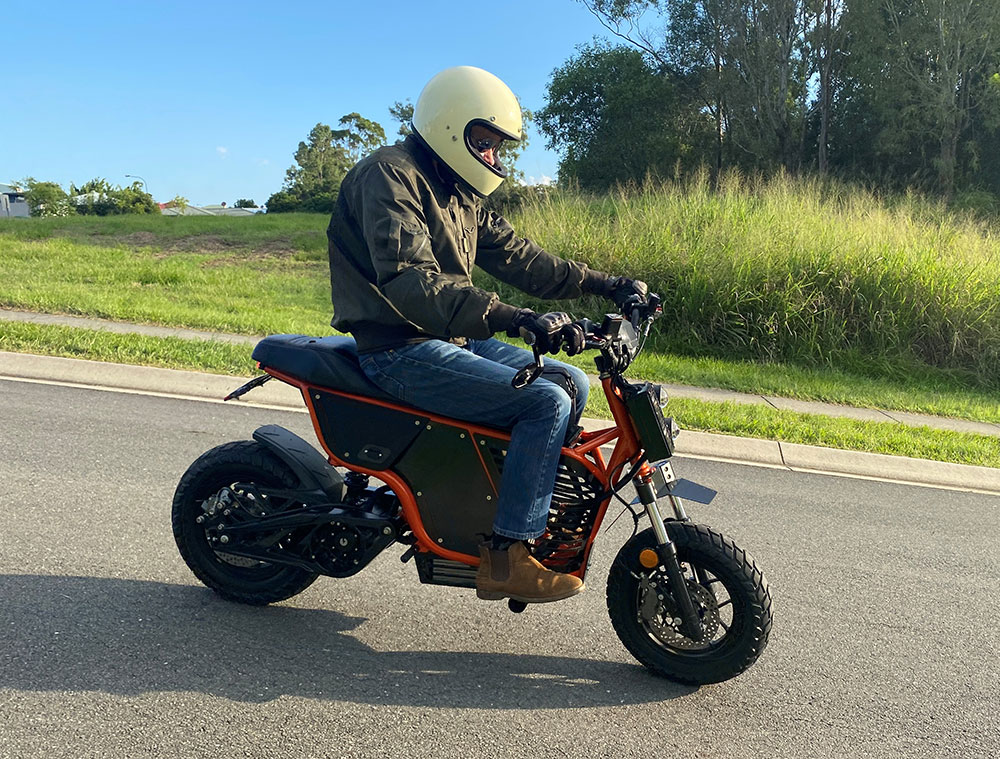 In fact, it’s probably best referred to as a midi-bike, sitting as it does on small 12-inch wheels with a motorcycle-type body but scooter-style front and rear brake levers on the handlebars, with no clutch or foot brake.

It may look small but your 183cm correspondent felt quite comfortable on the bike, despite the seat being a bit too firm. Not that you’ll ever be seated there long, given the bike’s limited range.

I found I could only get about 60km of range when cruising on the highway, but close to the 100km in urban riding.

This is due to its standard brake regeneration system, which captures kinetic energy to recharge the Panasonic Lithium-Ion 3.5kWh battery.

A small red lever on the brakes allows you to select the amount of regenerative braking you want, from coasting through to heavy retardation, with the latter topping the battery up at a faster rate

Truth be told, it takes some trial and error to get your head around the bike’s battery range and how best to utilise it.

I was twice caught out limping the Fonz NKDs home with the battery light flashing red.

And, while servos are plentiful for combustion-powered bikes, there are still not many public charging options available, even in a city as large as Brisbane.

That said, most charging happens at home anyway, where the Fonz’s bulky external charger plugs into a standard 10-amp household socket and takes several hours for a flat to full recharge.

You can also purchase an onboard charger that’s compatible with public EV charging infrastructure.

Unlike a petrol bike, where you tend not to think too much about the impact of your riding style on the bike’s range, thanks to the widespread availability of fuel stations, you need to take be aware of it on an electric bike, as the harder you pedal the quicker the battery drains.

Other factors that impact battery range include hilly terrain, temperature (you go farther when it’s warm), rider and pillion weight, and the amount of constant throttle use, such as on a highway. 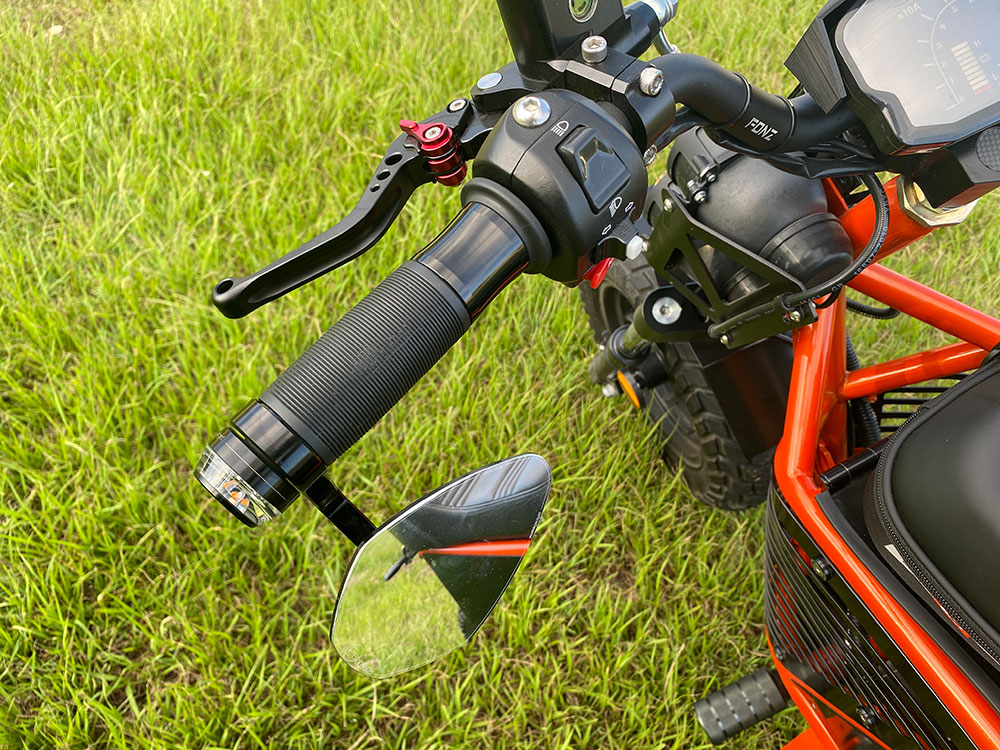 There are also three selectable riding modes which vary the available top speed to maximise range.

They include ‘Eco’ which is limited to 50km/h, ‘Street’ which tops out at 80km/h, and ‘Beast’ which delivers the full fat 100km/h experience.

Like most electric vehicles, acceleration off the line is brisk, thanks to the near instant delivery of the engine’s maximum torque.

Beating Porsches at the traffic lights is a no-brainer, at least for the first 50m, but after that, throttle response becomes limp and roll-on acceleration is modest.

Despite this, the Fonz had no trouble running with the traffic in most situations.

Of more concern was the slight hesitation of the test bike when applying throttle, before the arrival of a sudden wallop of torque that almost pulled my hands off the grips.

I also experienced ‘bunny hopping' when accelerating at slow speed on several occasions, which could be an issue with the bike’s electronic control systems.

On the handling front, the NKDs managed potholes way better than many scooters we’ve ridden, despite its 12-inch wheels.

There is no nervousness or kickback in the steering, thanks to the wide handlebars, conventional forks and single rear shock.

Handling and ride comfort are compromised somewhat by that basic rear shock, but the setup is fine for most urban duties, even proving surprisingly stable on the highway when being buffeted by passing trucks.

The single-disc front brakes are ample for this size bike, but the lack of ABS is a surprise.

Instead, the Fonz has something called EBS, or electronic braking system. 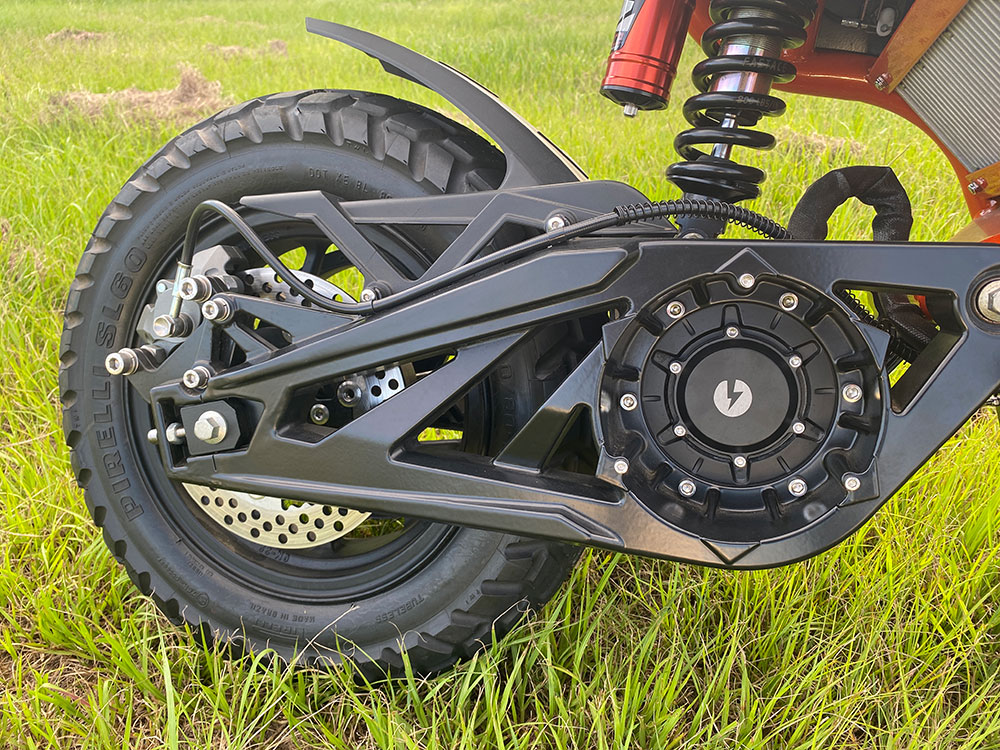 It differs from traditional anti-lock braking systems or ABS in that it’s not designed to prevent wheel lock up during hard braking.

Instead, EBS engages the brakes instantly when you touch the brake lever.

There’s practically no time delay between touching the brake lever and the brakes grabbing.

Unlike most scooters there is minimal under-seat storage and nowhere to hang your helmet, but there is a pillion perch where you can tie down some luggage.

You can also buy a lockable tank bag to store your gloves, phone, and other items.

The test bike also featured mirrors located underneath the bars, which look cool but are impractical as you need to lift your hands to see what’s behind you.

Similarly, the bar-end indicators look neat, but your hands can slightly obscure them.

On the noise front, there’s very little of it, and I must say I enjoyed the quiet operation of this electric motorcycle, as it allows you to enjoy your surrounds and relax, as well as being more observant to traffic noise that could be a safety hazard.

In summary, the team at Fonzarelli should take a bow for having the vision to bring an Australian-designed and assembled electric motorcycle to market.

If we could offer them some advice, it would be to improve the look and feel of the disappointingly cheap instruments, add better quality adjustable suspension and improve the quality of the finish, which is industrial.

The Fonz NKDs is not for everyone, due to its compact size and limited range, but as a fast and nimble urban commuter that emits zero tailpipe emissions, it ticks plenty of boxes.