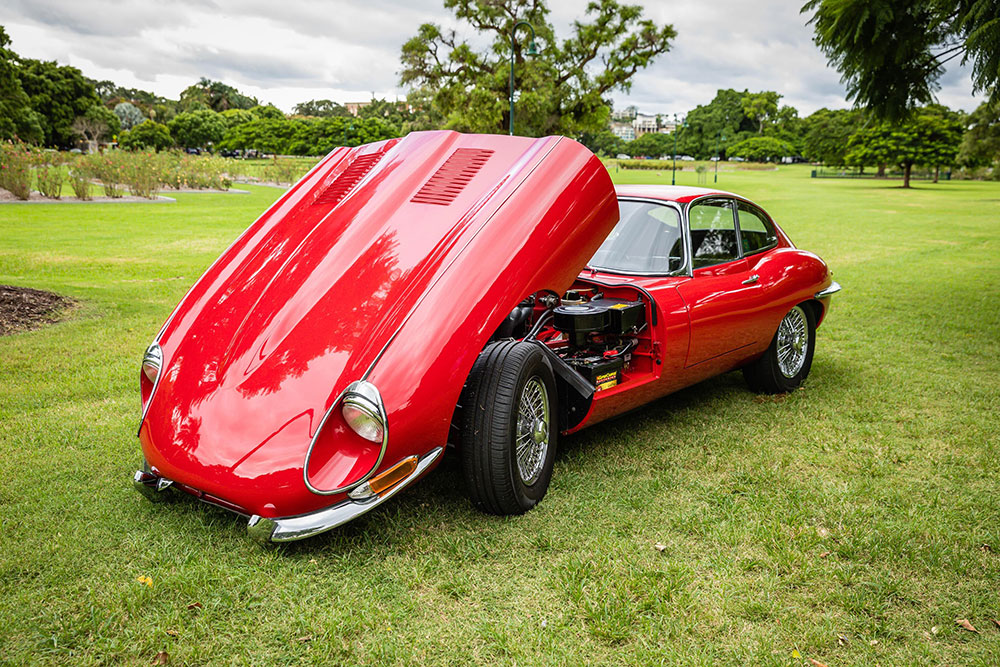 There are many pieces of silverware that the committed classic car collector covets, but in south-east Queensland few are as prestigious as having your vehicle immortalised on the official badge for RACQ MotorFest.

RACQ Senior Events Coordinator Tamara Van Der Walt said the team behind MotorFest selected a special marque to celebrate each year, marking the occasion with a limited-edition badge that can be affixed to the various vintage, veteran and classic cars that attend the event.

This year’s feature brand is famed British car maker Jaguar, with 2022 marking 100 years since the Swallow Sidecar Company – the outfit from which the Jaguar marque evolved – was founded in Blackpool, England.

Register your vehicle for display at MotorFest 2022

Ms Van Der Walt said RACQ MotorFest badges had been produced since the event began in 1995, when it was known as Motoring of Yesteryear, and had become a collectors item among the vehicle exhibitors that attend the Event.

“The badge usually features an iconic model from the anniversary marque that is owned by a member of the relevant club, and this year it is an owner’s car from the Jaguar Drivers Club of Queensland (JDCQ),” Ms Van Der Walt said.

“MotorFest visitors can expect to see a strong contingent of classic and contemporary Jaguars featuring the brand’s famous ‘leaper’ hood emblem, along with club displays from BMW Queensland, the Vintage Car Club of Queensland, the Mercedes Benz Club, and the Queensland chapter of the Veteran Car Club of Australia.” 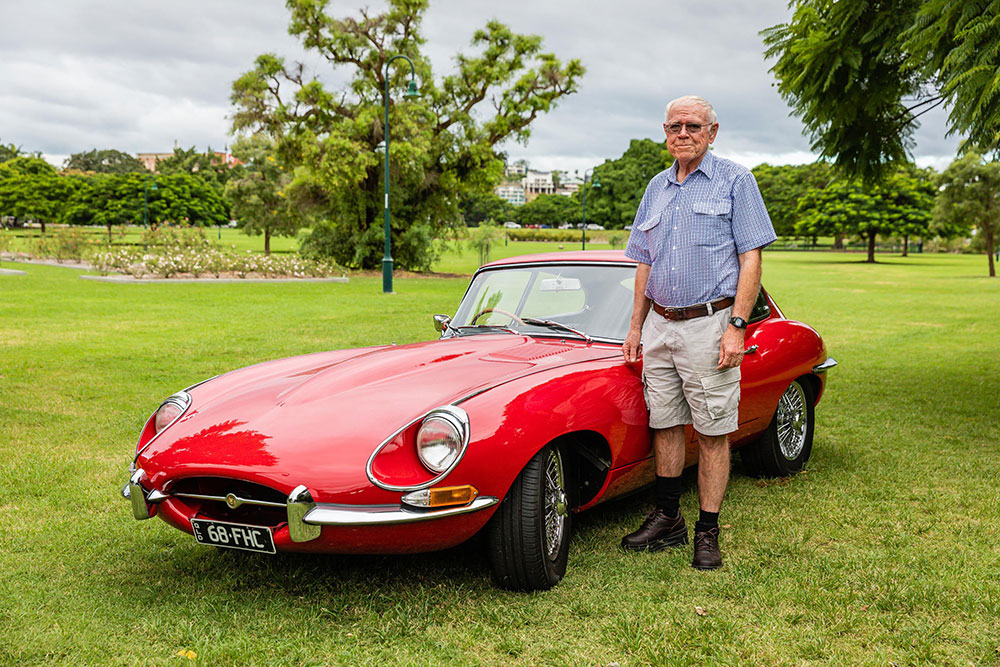 Unlike some heritage brands that have since ceased production, Jaguar remains a dynamic and desirable luxury brand today, and one of only a select few to have vehicles represented in both the classic and the EV sections of MotorFest.

The British car maker was among the first prestige brands to establish itself in the EV space following the launch of the Jaguar I-Pace in 2018 and Ms Van Der Walt said organisers hoped to have 2022 versions of the I-Pace displayed alongside other EVs and innovative technologies in MotorFest’s Future Zone.

Barry Cooper (pictured) is the fortunate owner of the stunning Jaguar-E-Type featured on this year’s badge.

The iconic cigar-like shape of the E-Type is instantly recognisable to classic car enthusiasts around the world and the Jaguar was reportedly once described by Enzo Ferrari as the “most beautiful car ever made”.

As well as being beautiful, the E-Type with its 4.2-litre inline six-cylinder engine and triple SU carburetors, is regarded by many as one of the greatest sports cars of all times and regularly features on lists of the most influential and iconic automobiles.

First released in 1961, three series of the classic coupe and convertible were manufactured over a period of 15 years, with Barry’s car being a 1968 Jaguar E-Type Series 1½ 4.2-litre Fixed Head Coupe.

“The chairman of the JDCQ Brisbane Register got in touch with me and asked if I’d be willing to use my car for the badge,” Barry said.

“I suggested there are a couple of other cars that have had more recent restorations than mine, but ours was convenient, and red, so we got the nod.” 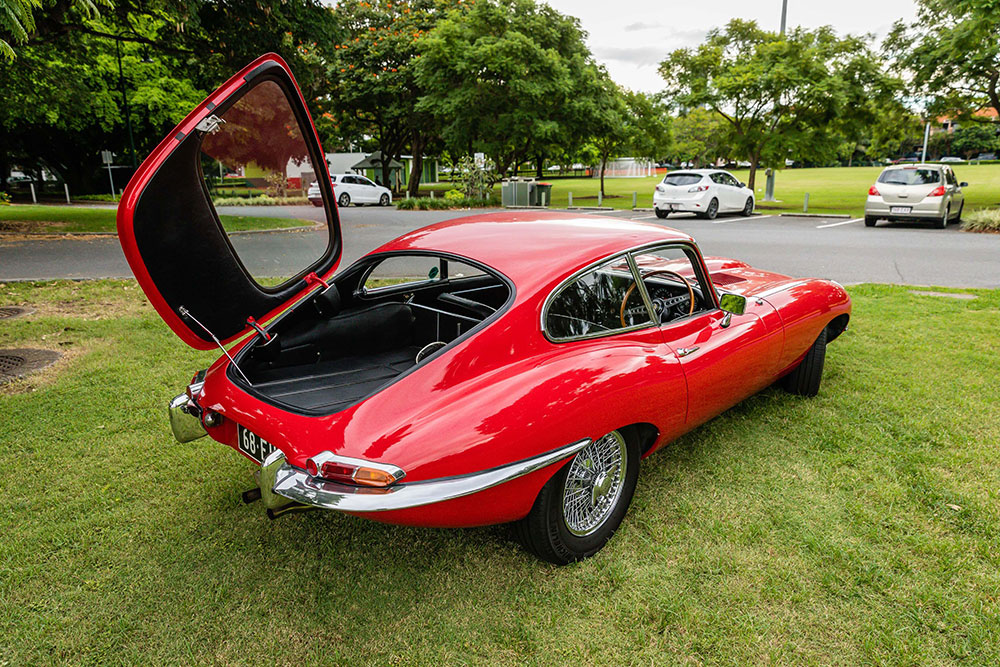 The retired Brisbane IT specialist is being modest, as the 68-FHC (Fixed Head Coupe) has won numerous national and state level Concours d'Elegance awards, including Best E-Type at the JDCQ Display Days four years in a row between 2006 and 2009, plus Gold in the 2010 Jaguar National Rally Concours d'Elegance, along with various other awards.

The eye-catching paint colour is a close match for an original factory hue called ‘Carmen red’, which Barry admits his paint and body specialists couldn’t quite match when restoring the E-Type in 1995, but notes this “hasn’t impacted on our concours results”.

Barry has his own website dedicated to the E-Type and various other classics he owns, where he recounts that his Jaguar was built on 5 July 1968 and delivered to the Ashton Preston dealership in Lancashire, England.

Dedicated detective work led him to the car’s second owner, a dentist still living in the UK, who purchased it from the original owner in 1971, for what looks now like a bargain-basement price of £2100 (A$3670). 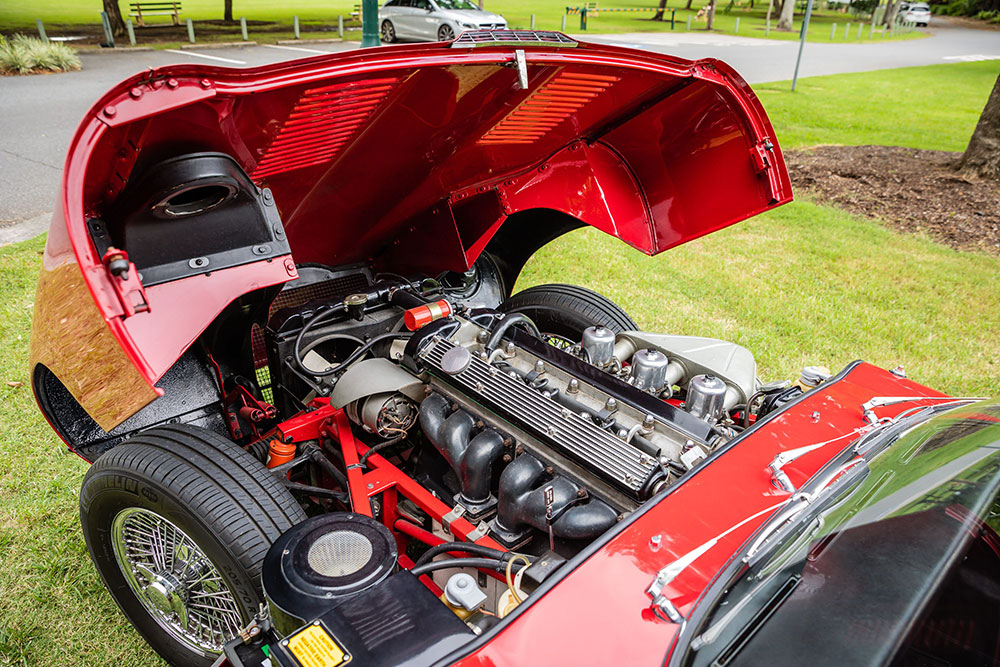 The dentist was able to tell Barry whom he sold the E-Type to, but after that the trail went cold and Barry said it was a mystery as to how and why it came to be in Australia.

He believes it was located on the Gold Coast for many years, before he came across it and purchased it in Beaudesert in 1991, in a much less pristine state than it appears today.

“There weren't many E-Types to choose from at that time and this was what seemed to be the best of a bad lot,” he said.

“Maybe it was, but it wasn't good, having been bodged in all the usual ways, particularly the body with flattened tin cans and tar paper repairs on the floors.”

Following the ground-up restoration, Barry said he enjoyed driving the Concours-winning Jaguar regularly, including on long trips, where he said it performed well, with the only drawback being the warm cabin temperatures, particularly in the Queensland summer.

He has also been a regular attendee at RACQ MotorFest over the years and has a small collection of badges but acknowledges this year’s badge will be a bit more special than the others.

MotorFest visitors can find Barry’s beautifully proportioned E-Type with its distinctive wire wheels and eye-catching red paintwork among the 100 or so other classic Jaguars that the JDCQ is hoping to assemble for the event.

At the time of publishing, the Queensland Government mandate is that all patrons attending events must be fully vaccinated. Patrons will therefore be required to show proof of vaccination upon entry into Motorfest, as well as signing in using the Check In Qld app.

This is subject to change and will be as per advice from the Queensland Government.

Click here for more information regarding the Check In Qld app and your virtual vaccination certificate.