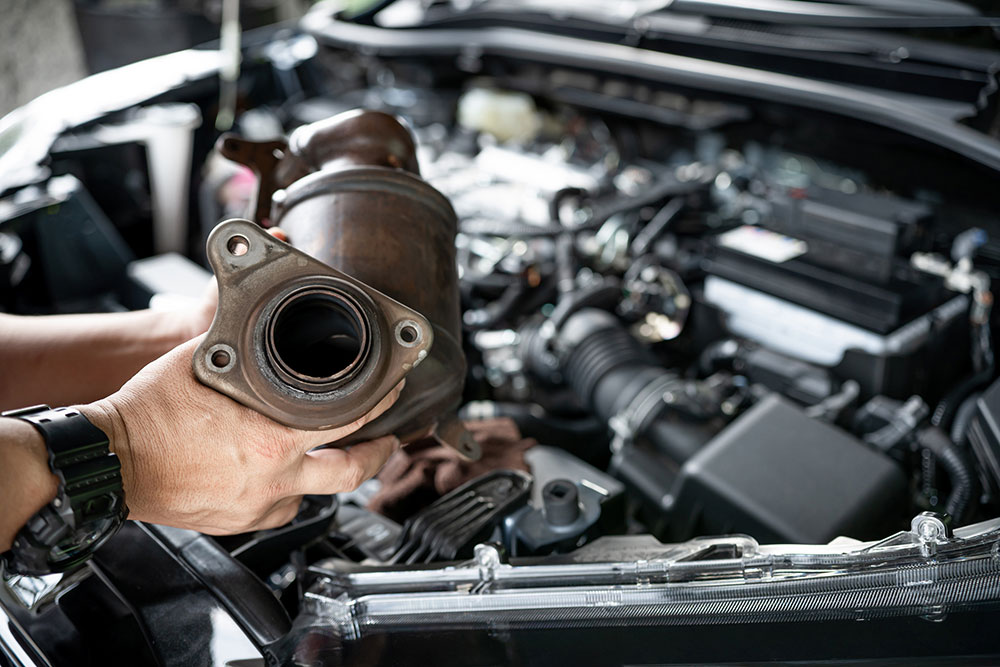 Catalytic converters were introduced in 1986 on petrol engine vehicles in Australia and they are becoming more common on diesel models.

Fitted into the exhaust system relatively close to the engine to ensure they get to their high operating temperature quickly, they generally look like a small muffler with an outer body of stainless steel. A honeycomb ceramic block inside the converter provides a large surface area coated with various noble metals such as platinum, rhodium and palladium.

They act as a catalyst promoting a chemical reaction with the exhaust gases passing through the system. The metals don’t get consumed in the reaction.

Three-way converters, now the most common type for petrol engines, also oxidise hydrocarbons and carbon monoxide similar to a two-way converter, but through a reducing process can also deal with harmful oxides of nitrogen. The end products of these reactions are carbon dioxide, water and nitrogen.

Oxidising-type catalytic converters, specifically designed for diesel combustion, are used on diesel engines. They can clean up hydrocarbons, carbon dioxide and a small percentage of the relatively high particulate matter (soot) levels in diesel exhaust.

However, they don’t work well to control oxides of nitrogen. Other control methods such as exhaust gas recirculation (EGR) or selective catalyst reduction (SCR) systems using the injection of a urea-based solution like AdBlue into the exhaust are also required. Catalytic converters typically operate in a temperature range of 375°C to 600°C, so vehicles fitted with them shouldn’t be parked where the converter could be close to dry grass and the like, due to the potential fire risk.

They generally have a long life, but they eventually wear out and require replacement, which can be expensive.

Their demise can be hastened by engine-related problems that increase the level of unburnt hydrocarbons such as misfiring, overly rich fuel mixtures or oil burning from a worn engine.

Such conditions can cause the converter to overheat, melting the internals. Impacts with road hazards such as speed bumps can also easily destroy the internal components.

The converter is part of the vehicle’s emission control system and ensures the vehicle meets the emissions standards it was built to comply with, which is a legal requirement.