Rainforest river adventure, without the crocs

You may have snorkelled on the reef, but have you floated through the rainforest? 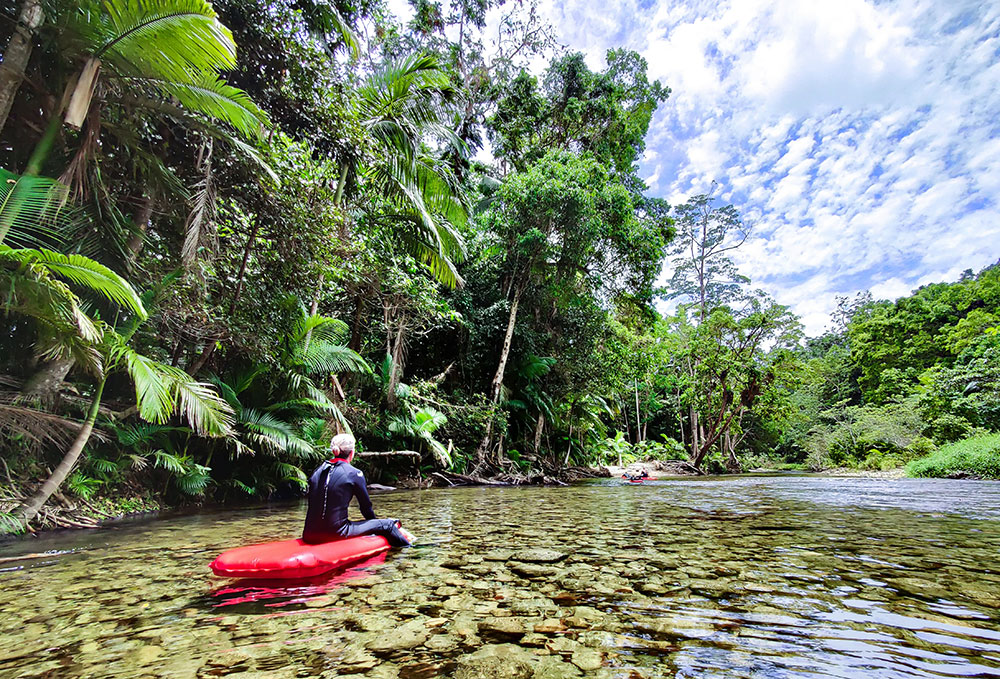 I have snorkelled with salmon in a cold Canadian river, swum with manta rays on a hot Hawaiian night and now I’m gliding through the Daintree Rainforest in a mask and fins.

I am on a river drift snorkel with Back Country Bliss through the world’s oldest rainforest in far north Queensland.

Not lost on me is the fact that north Queensland rivers are notorious for reptiles of the crocodile type – the kind that eat you.

The good news is I have found myself in this precarious position before.

Five years previously, I travelled to Vancouver Island to go snorkelling with salmon.

A trip that doesn’t sound all that dangerous unless you have seen a National Geographic documentary where grizzlies were perched on a riverbank, waiting for the same salmon.

It turns out on that tour I was more scared of the instructor, a hard-core Canadian who warned us of myriad dangers (none of them actual bears), including that snorkelling would be like a giant game of pinball, where we were the ball. This trip is no different in terms of danger level.

Crocs, it turns out, are not a hazard here as they possess an acute aversion to cold water.

And the water in the Mossman River is fresh – at best 24C in summer and at worst 16C in winter.

But what if there’s a rogue reptile?

Back Country Bliss owner Jason Heffernan, who bought the business in 2016, reassured me the water was too crisp for crocs. 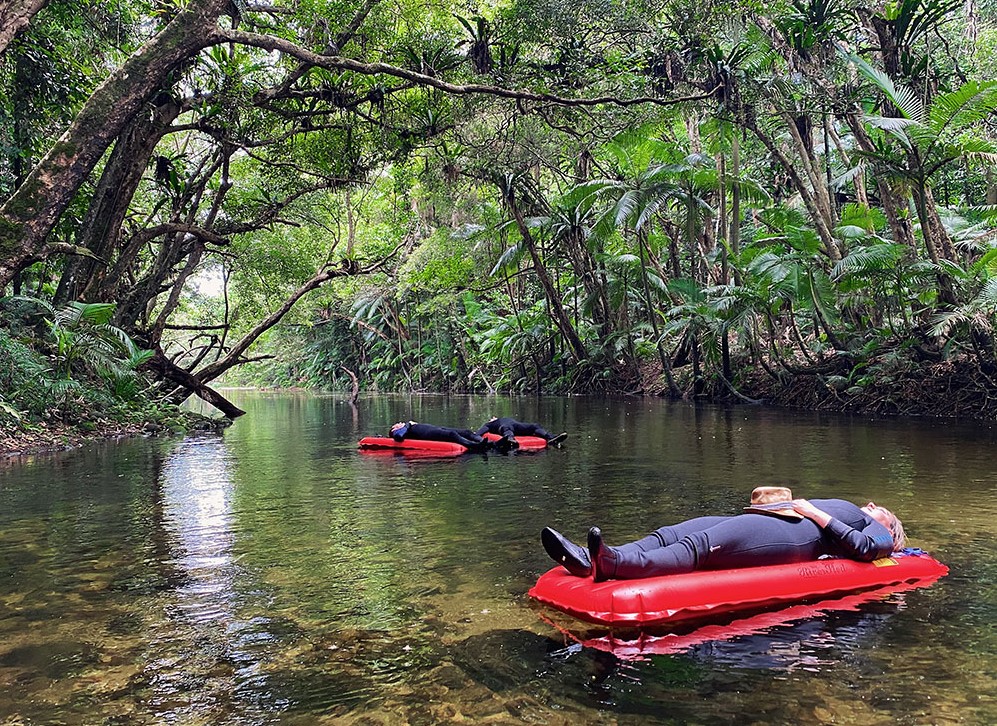 “We’ve got the normal boundary of the river where people swim and we are even further up past there. There are enough humans between them and us,” Jason said in that reassuring manner Queenslanders have to describe potential strife.

“We are not in an inter-tidal zone. There are no sandy beaches for them to sit and sunbake and the food supply is not really there.

“It is definitely not impossible for a croc to get up there, but it would get sick pretty quickly.”

Instead, Jason assured me I would be blown away by this perspective of the Daintree from the back of my river sled, made of the same sturdy material used for white-water rafts.

“The rainforest is the most spectacular vision you can see,” he said.

“Most people don’t think much about fresh water in the tropics. The reef is beautiful, but the rivers are really nice.

“Where the river and rainforest meet, there is no disturbance. It’s just beautiful scenery and tonnes of fish.

“There’s saw-shelled turtles where the back of their shells look like a saw blade, jungle perch as long as 45cm, eastern rainbow fish, Pacific blue eyes, yellow fins and eight species of goby, including an incredibly endangered one.”

On the 50km trip from Palm Cove to Mossman, we drive past Hartley’s Crocodile Adventures and over the Mowbray River where Mo, a 4m male croc, is sunbaking on the sandbank.

I think back to the crocodile pie I once ate and thoroughly enjoyed in Port Douglas and secretly hope I don’t meet a reptile hell-bent on revenge.

The water is a cool 20ºC on this day, but I am warmed by my wetsuit and the thought that crocs hate the cold. This two-hour tour alternates between swimming, snorkelling, floating and an amble through the rainforest where we pause to admire a giant mahogany tree and swerve to avoid a stinging bush. Underwater I wade and weave between trees and logs in search of turtles, freshwater fish and platypus.

There are fistfuls of fish but no crocs.

About the only reptiles here are the harmless water dragons perched on the riverbanks. I am not disappointed with this outcome.

Towards the tour’s end and exhausted, I slump on my sled and stare overhead.

I remind myself I am witnessing the world’s oldest rainforest.

The only sound I can hear is my breathing – long, soulful, satisfied breaths.

It is pure and utter bliss.

“At the end of the tour, I want visitors to feel refreshed and just enjoy the moment when you are lounging on your sled and looking up at the canopy,” Jason said.

“No matter how many times I do, it is the most satisfying feeling you can get.

“It is such an epic way to see the forest.”